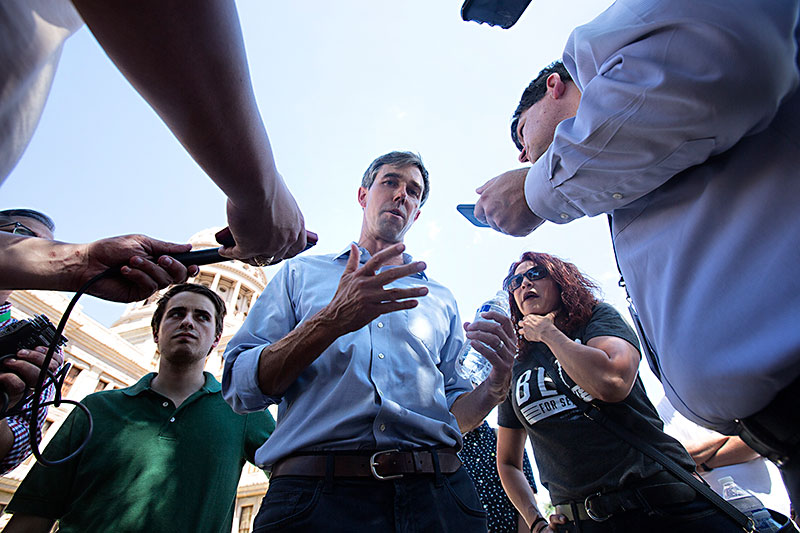 All Eyes on Him: U.S. Senate candidate Beto O'Rourke wrapped up a breakout week at the Capitol on Tuesday, where he joined Mayor Steve Adler and state Rep. Senfronia Thompson at the Rise Up Rally for criminal justice reform. (Photo by Jana Birchum)

Got No Mandate: The Texas Supreme Court this week rejected "mandamus" requests that would have required Council to rewrite propositions concerning an efficiency audit and land use code rewrites. Meet them again on the Nov. 6 ballot. See "Supremes Reject Ballot Lawsuits," Aug. 31.

Gatehouse or Outhouse? In the first of what could be many staff exits, the Austin American-Statesman reported that Publisher Susie Biehle and Editor Debbie Hiott are among those accepting buyouts from new owners GateHouse Media. See "Point Austin," Aug. 31.

School Taxes Steady: The AISD Board of Trustees on Monday approved a total tax rate of 1.1091 cents per $100 of property valuation for the coming school year, with 1.079 cents going toward district operations and 0.301 cents to pay down debt. The rate is unchanged from last year, but the district will take in more revenue due to rising property values within the district.

Milliken's the Man: UT Regents on Monday named James Milliken as the school system's next chancellor, replacing Bill McRaven. The 61-year-old comes to Austin from New York, where he's worked for four years as chancellor of the City College of New York.

Most pregnancy-related deaths in 2012, the year maternal deaths hit a high in Texas, could have been prevented, a new state report found. The most common causes were heart issues, hemorrhaging, and infection, noted researchers with the Texas Maternal Mortality and Morbidity Task Force as well as the Department of State Health Services.

Once Were Confederates: The five Austin ISD schools named after Confederate figures will receive new names this semester, to go into effect during the next school year.

For the rock-dwellers ... or those who live under them: News broke moments after we went to press last week that the incoming soccer team will be known as the Austin FC. Their colors will be black, white, and "bright verde," and their logo depicts two live oaks intertwining with one another, something that doesn't really happen with live oaks. Clever, though.