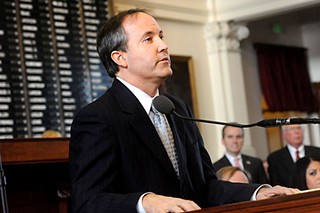 The state of Texas and conservative business groups succeeded in halting Austin's paid sick leave ordinance – for now, at least. The rule, passed by City Coun­cil in February, is intended to grant most employees throughout the city up to 64 hours of paid sick time per year, beginning Oct. 1. Business groups including the Texas Association of Business, represented by the Texas Public Policy Foundation, filed suit against the new ordinance, but in June District Judge Tim Sulak denied their request. So those groups aligned with Attorney General Ken Paxton and went to the 3rd Court of Appeals, which temporarily blocked the ordinance last Friday, Aug. 17.

The court makes clear in its filing that the order "should in no way be read as a comment on the merits of the underlying appeal" – in other words, the ruling isn't an opinion on the legality of the ordinance. However, TAB called on Austin to be extra deferential, saying the city should "respect the Court's ruling and stand down on all efforts to implement the ordinance, including outreach to businesses and public forums until the appeal process concludes." Work Strong Aus­tin, the coalition leading the charge in support of the rule, called the court's decision a result of a "cold and desperate attempt by special interest groups with ties to the Koch Brothers" to meddle in the community. "We are confident the courts will ultimately uphold the law and allow our hardworking neighbors the right to earn paid sick time to take care of themselves and their loved ones," they wrote.