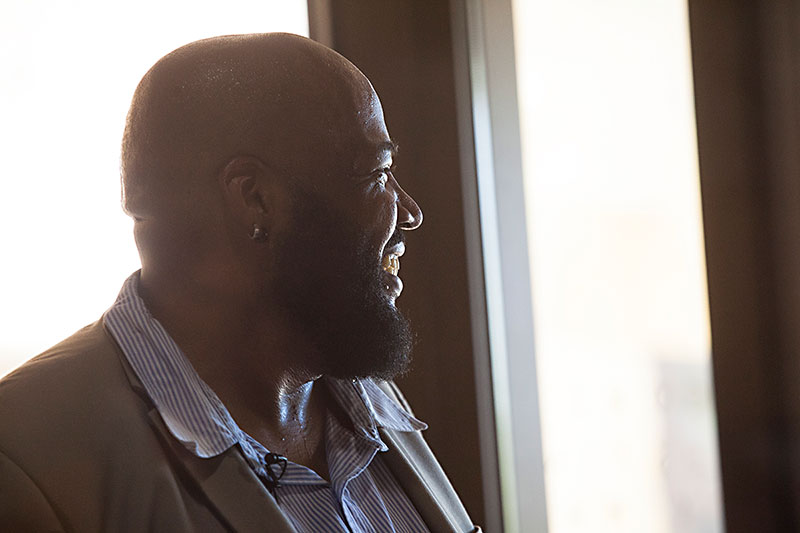 Lewis Conway Jr. at City Hall on the day he filed for City Council (Photo by Jana Birchum)

It's been a tumultuous week for Lewis Conway Jr. and his campaign for City Council in District 1, most publicly because for a period of time it wasn't clear whether he'd be able to run. Although previous reporting indicated that Conway – a convicted felon – could only have his eligibility challenged by one of his opponents, City Clerk Jannette Goodall last Friday wrote to him with news that she would challenge the candidacy herself, unless he could submit documentation proving his eligibility. Con­way and his legal team met with city attorneys on Monday, and he submitted proof that his voting rights have been restored. On Tuesday, Goodall informed Conway that he'll remain on the ballot after all. Conway hailed the decision as a victory for the millions of Texans caught in the criminal justice system. "I have served my time," he said, "and now I am ready to serve my community."

But Conway by then was already encumbered by the political fallout from a Thurs­day night meeting of the local chapter of the Democratic Socialists of America, of which Conway counts himself a member, and during which he was expecting to receive a coveted endorsement from the group. My colleague Mary Tuma was in attendance, and during the early part of the meeting watched Council Member Greg Casar promote the housing bond, and members talk about society's ongoing effort to criminalize homelessness, and about certain bylaw amendments. But after that, leaders asked that non-dues-paying members leave the room so that the party could address an issue with one of the candidates.

One DSA member who recorded the conversation sent audio recording of the discussion to me that night: The candidate in question is Conway, and, specifically, unspecified allegations that the DSA electoral committee dug up from Conway's 2009 child custody battle with an ex-girlfriend, found in the public record in a case file at the county court.

Conway was quick to address the matter, but between the officials' vague explanation of the allegations and the candidate's efforts to discuss other components of the child custody case, it is not exactly clear what sort of allegations officials were trying to have raised. (I was only able to access certain records in the file, and did not obtain any documents that would raise direct concern.) Conway acknowledged that he lost parental rights to his children in an effort to avoid returning to prison for non-payment of child support. (He said he failed to secure steady employment following his incarceration.)

Though no DSA official spoke directly to the ex-girlfriend's allegations, Conway did acknowledge them to some extent. "Over a decade ago some accusations were made that a district judge decided was untrue and granted me custody," he said, in reference to the proceedings that ultimately established Conway as a possessory conservator, granting him the rights of a parent without final say on most decisions. "I guess I'm not in a position to argue with what a district judge has decided."

Via telephone on Monday night, Conway denied the allegations without addressing their exact nature, and pivoted to his inability to pay for child support. He said it was a devastating decision to relinquish custody of his two children. "Employment and my criminal background were the variables that resulted in my having to choose between freedom or custody of my kids."

But the situation prompted a fissure at the Austin DSA on Thursday, in part because members weren't exactly clear on what they were discussing. Some members, committed to the principles of criminal justice reform and enthused by Conway's candidacy, suggested that the party look past the situation. Others spoke out against discounting his ex-girlfriend's account. Electoral Commit­tee Vice Chair Susanna Woody announced plans to leave the group's leadership over how the situation was handled. "The EC had research on all the candidates, but the leadership committee blocked us from sharing that information," she said at the meeting. She blamed her departure on leadership committee members who she said worked to block the specific allegations from being presented to the full membership.

When we spoke on Monday, group co-chair Dave Pinkham denied that DSA leadership barred Woody and the EC from talking about the specific contents of the custody file. He said Woody only told them about the allegations the day before the meeting, and therefore leaders decided to let all members weigh in at the meeting that evening. "We are a democratically run organization," he said.

The group eventually settled on postponing a decision to endorse Conway until it can arrange a special meeting to consider the allegations. (It did endorse Julie Ann Nitsch for re-election to the ACC Board of Trustees, Place 9.)

"We live in a society where the criminal justice system exists as a punitive measure to criminalize people for all manner of situations that have a lot more to do with structural inequities in our society," Pinkham said. That's a dynamic the Austin DSA will need to address with Lewis Conway. 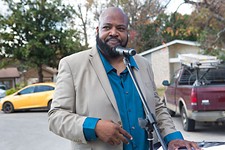