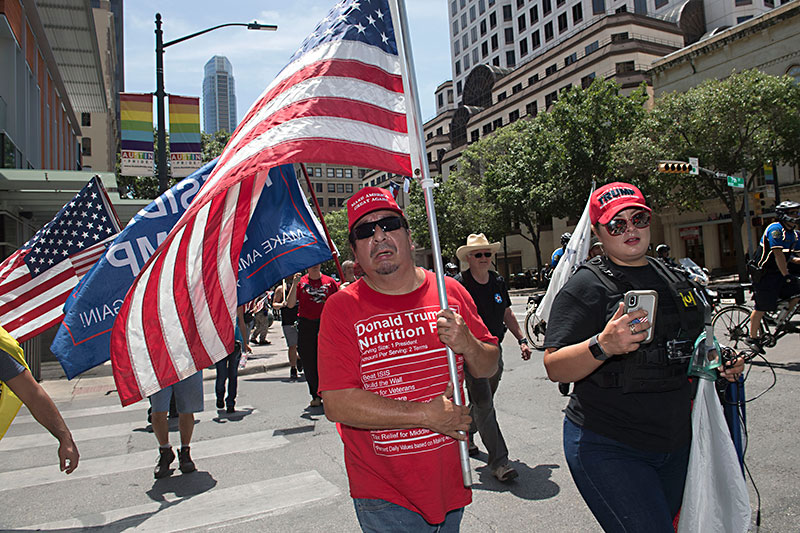 The March Against Far-Left Violence on Saturday proved an excellent opportunity to check out the latest in right-wing fashion: In addition to this stylish Donald Trump Nutrition Facts T-shirt ("Beat ISIS: 100%," reads the top line), organizer and Texans United for America President Jennilyn Salinas (at right) was later seen sporting a "Fueled by liberal tears" T-shirt, while others displayed classic camo patterns and matching assault rifles or touted their support of the crimes of Chile's former dictator Augusto Pinochet. The event's sponsor, state Rep. Dan Flynn, R-Canton, said during a Capitol speech that he was "proud to be here," but so were several hundred counterprotesters who had gathered to "drown out fascist hate." "Their message is one of intimidation," said Dave Pinkham, co-chair of the Austin chapter of Democratic Socialists of America. "We came out to show, it is not what the majority of people in the society believe in." – Martín Steinhagen (photo by John Anderson)

Watch Your Language: Filings continue in the two ballot language lawsuits before the Texas Supreme Court, brought by petitioners to force City Council to revise ballot language adopted for the "efficiency audit" and land use code revision (e.g., CodeNEXT) propositions – rulings are expected in the next few days. See "Ballot Lawsuits Simmer at Supreme Court," Aug. 24.

An independent investigation has concluded that the city's Equity Office did not discriminate against former employee Nadia Kalin­chuk or other Latina employees. However, investigators did conclude that a "relationship" exists between certain members of the office and the Hispanic/Latino Quality of Life Commission that may be harming the office's effectiveness.

Sober Up Here: The Austin Sobering Center opens Downtown today, at 1213 Sabine, as an alternative to jail and emergency room sobering, after years of public effort. So if you're used to getting picked up and sent to the ER for being too drunk in a public place, and you come to one morning and you're in some place unfamiliar and new – chances are you're at the Sobering Center.

An Abysmal Record: For the second year in a row, Texas ranks third worst in the country when it comes to women's equality. Examining women's income, executive positions, and political representation, a study by Wallet Hub found Texas in 48th place. For better gender parity? Move to New York or Minnesota, according to the report.

Carry on Campus: The 5th Circuit Court of Appeals tossed out a lawsuit by three University of Texas professors who challenged the state's ­campus carry law, upholding U.S. District Judge Lee Yeakel's dismissal of the case last July. The professors argued that the law violates their First Amendment rights to academic freedom.