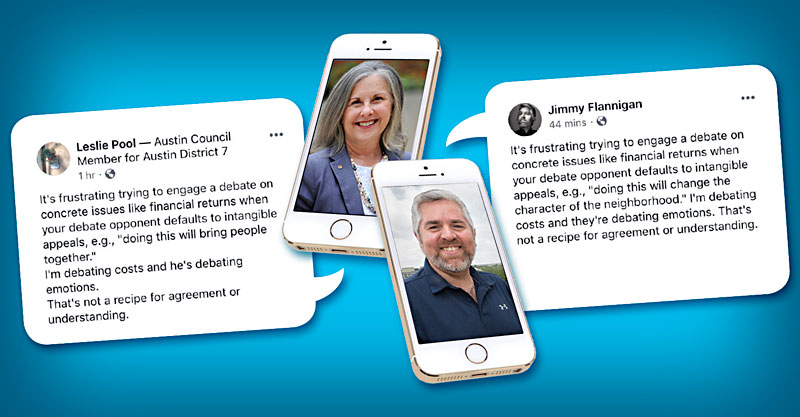 City Council members went into last weekend already in need of a break from one another, even with just one regular meeting under their belt following the five-week summer recess. It wasn't the length of Thursday's 10-and-a-half-hour meeting that necessitated the breather, but rather the frustration built from two opposing wings of the dais grappling over the question of whether to ink a deal with Precourt Sports Ventures to bring Major League Soccer to Austin. The heated nature of the discussion – specifically, whether Council Members Leslie Pool, Alison Alter, and others were trying to drown the deal in "poison pill" amendments, as Mayor Steve Adler had suggested – as well as the sheer number of amendments being proposed, led to the item's postponement until Wednesday morning (see below).

But members clearly weren't taking respite during the weekend, which happened to coincide with the Austin Pride festival and parade. On Saturday afternoon, Pool took to Facebook to declare, "It's frustrating trying to engage a debate on concrete issues like financial returns when your debate opponent defaults to intangible appeals, e.g., 'doing this will bring people together.' I'm debating costs and he's debating emotions. That's not a recipe for agreement or understanding."

Pool's words appeared to some a thinly veiled swipe at Adler, who has advocated for MLS in Austin as a matter of public good. The mayor declared on Thursday night that he was ready to vote down all the proposed amendments and scolded his colleagues for what he viewed as attempts to indirectly derail the process rather than simply vote against the final measure. But the posting clearly irked Jimmy Flannigan, one of the mayor's allies on the issue, who stepped aside from his preparations for the parade to respond in kind: "It's frustrating trying to engage a debate on concrete issues like financial returns when your debate opponent defaults to intangible appeals, e.g., 'doing this will change the character of the neighborhood,'" his post reads. "I'm debating costs and they're debating emotions. That's not a recipe for agreement or understanding."

Pool, who was up in Columbus, Ohio, on Monday and Tuesday looking into "what the actual impacts are on the families who have built their lives around soccer in this town," she told The Columbus Dispatch, declined to comment on the weekend back-and-forth, but Flannigan was happy to talk. "It's fair to say that in the middle of the Pride festival and the parade, I was ready to throw some shade," he joked. He said he found it interesting that Pool would make such an argument, because he regularly has disagreements with her when it comes to land use, and in those cases he finds her to be far more focused on qualitative issues like preservation of neighborhood character. "It's very refreshing to see Council Member Pool desire in conversations a focus on financial outcomes," Flannigan said. "It's something I have been asking for when it comes to land use, and I haven't felt she was on the same page when it came to those situations."

The two spent the previous half-year seated next to each other during meetings, which made for some snippy interjections, but now find themselves on opposite ends of the dais. Maybe that's for the best.

With little fanfare, Council last week also approved a pair of charter amendments for voters to consider in November. One has to do with nonsubstantive cleanups of the charter language itself for obsolete language, and the other fixes the hang-up keeping Council from removing Planning commissioners before the end of their two-year terms. That leaves off the table a substantial amount of work from the Charter Review Commission, tasked with recommending these changes to Council, which recommended (among other things) a "democracy dollars" program that would go toward funding candidates who are running in municipal races. It's obviously expensive to run for office, and this could make that dynamic more equitable.

There's no meeting this week, and the final agenda isn't yet set for Council's next regular meeting, Thursday, Aug. 23, but we know at least that the overhaul of the city's 380 Agreements (which govern economic incentive programs) will make an appearance. Members pored over the details last Thursday, but were unable to reach a final decision before the looming soccer testimony drove them away from the topic. Add to that the city manager's recommendations on density bonus programs within adopted small area plans, a hefty slate of zoning cases, and a return of Capital Met­ro's quarter-cent funding, and we're looking at another fun one.