Pick Your Plan for McKalla Place

Precourt vs. the field 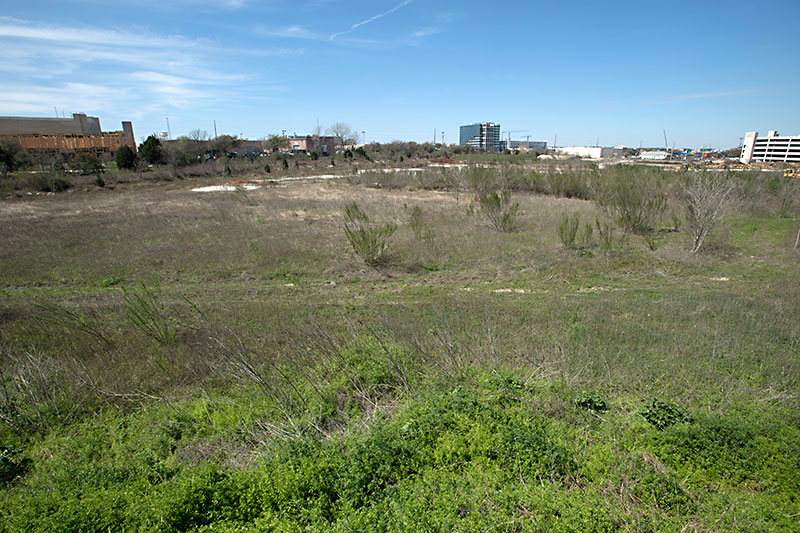 Everybody wants a piece of McKalla Place. (Photo by John Anderson)

City Council will vote on taking another step toward bringing a Major League Soccer team to Austin on Thursday – and at the same meeting will discuss potential alternative uses for McKalla Place. Item 19 on the agenda would "authorize negotiation and execution of agreements with Precourt Sports Ventures" to bring a soccer stadium to McKalla, using the term sheet negotiated between the city and PSV as a guide. Item 109 would allow Council to discuss and take "possible action" on any of the five alternative plans which were submitted to the city.

Whereas the pro-soccer resolution and pro-other-use resolution were able to coexist following their separate approval on June 28, that is not the case with Items 19 and 109. Should Council vote to proceed with PSV, the alternative plans would be put on hold – for now.

The alternative proposals were due last Friday. Most outline developments that blend open and greenspace with retail, office, and residential space, especially affordable housing. But some of the developers felt that it was ultimately a futile effort, and that Council had made up their mind to proceed with PSV. On Monday, developers described the submission period as frustrating and perfunctory; in part because of a vague process in which little direction was provided to interested parties. A memo sent from the city's Economic Development Department compounded these fears, reading, in part, that the "submission of plans is not a purchasing activity and/or a procurement event." It continues: "The City of Austin will not award any contract based on any information received in response to the Resolution on June 28. ... Because this is not a procurement event, there will be no analysis or evaluation of information the City receives."

“It’s been lopsided in Precourt’s favor from the beginning.” – Scott Moxham of Capella Capital Partners

"It's clear we've been sort of off to the side on this process," said Scott Moxham with Capella Capital Partners. "It's been lopsided in Precourt's favor from the beginning." Last week, Capella revealed one of two plans for McKalla that would have the developers team with PSV to bring MLS to Circuit of the Americas, with land provided free of charge by COTA chairman Bobby Epstein. Capella would then construct a "live-work-play" development at McKalla with about 1,200 housing units, 300 of which would be sold or leased below market rate. The site would also include a grocery store, Class A hotel, and about 800,000 square feet of office space. Representatives with PSV have indicated that they would not support such a proposal.

Fellow developer John Chen shared the frustrations. He and his business partner Marcus Whitfield proposed a plan for a McKalla district focused on what they call "regenerative design." Among other familiar ideas – affordable housing, a rail station, and commercial space – the Whitfield-Chen plan would add a residential wellness center, which would create an "all encompassing environment for stimulating mind and body," according to the site plan. Chen said he was glad the city agreed to review other proposals for developing McKalla while considering a potential deal with PSV. He said it would be a "mistake" for Council to ignore the other possibilities for what to do with the 24-acre lot, and he hoped that the process would at least help Council "look more critically" at the PSV term sheet.

At a Tuesday Council meeting to hear presentations on the alternative proposals, some CMs shared their own frustrations with the submission process. Jimmy Flan­nigan said he was "ambivalent" to a soccer deal, but called the alternative proposal process one of the most "frustrating and mind-blowing experiences" of his tenure, decrying neighborhood groups who rail against density in one case, but praise it as a better choice in the case of McKalla. Alison Alter countered that the alternative process was put in place out of necessity, because Council was "denied" an opportunity to have a process "worthy of our city." Leslie Pool pointed to support for the new Broadmoor development in the North Bur­net/Gateway area as evidence that surrounding neighborhood groups weren't unequivocally against density.

Pool noted on Monday that the alternative proposals would be helpful to the McKalla process overall, even if none of them moved forward. For one, they won't technically be dead until City Manager Spencer Cronk signs an agreement with PSV. Even if Item 19 passes, the alternative plans will float around as potential backup options that the city can return to should the deal with PSV fail to be executed.

Council will likely vote to approve some version of Item 19. But the resolution will certainly undergo an intense amendment process – which could require city staff to return to Council with a more detailed agreement with PSV that would go through another vote. Even if it doesn't pass, a package of amendments posted to Council's online message board by Pool, Alter, Ora Houston, and Ellen Troxclair on Tuesday will ensure an intensive discussion. The proposed changes include: an increase in annual rent paid by PSV from $550,000 to $958,720, along with another annual payment of the same amount to be split by AISD, Travis County, Austin Community College, and Central Health; a cap of $500,000 paid by the city on any potential environmental remediation costs that may emerge over the life of the deal; the inclusion of specific non-relocation penalties that would require PSV to return the McKalla site to "developable conditions" and to repay "forgone rent" during the years the site hosted a stadium; plus revenue-sharing mechanisms to dedicate money from ticket sales and parking revenues back to the city. Previously, PSV lobbyist Richard Suttle said there wasn't any more money the city could wring from the deal, so it's hard to imagine how many of these amendments PSV will consider feasible.

Will Any of This Matter?

The lawsuit filed by the Ohio attorney general and Columbus city attorney to keep the Crew from leaving Columbus will drag on to at least early September. A new order issued by Franklin County Court of Common Pleas Judge Jeffrey M. Brown added another 44 days to the tolling period on the case that he initially instituted in May. The initial toll paused the case along with discovery and a ruling on the constitutionality of the Modell Law – which requires pro sports team owners give six months' notice and a chance for local buyers to purchase the team before leaving – but that period expired Monday. Brown also scheduled oral arguments on PSV and MLS's motion to dismiss the suit to be heard Sept. 7, and also ordered all parties in the suit to submit a joint report on the status of negotiations for local buyers to purchase the Crew. The reports will be sealed, but Brown can order them unsealed, potentially giving a glimpse into whether or not such buyers exist and are capable of purchasing the team before PSV even has a chance to break ground at McKalla.

Soccer in Austin: The Knockout Stage
Showtime at McKalla Place