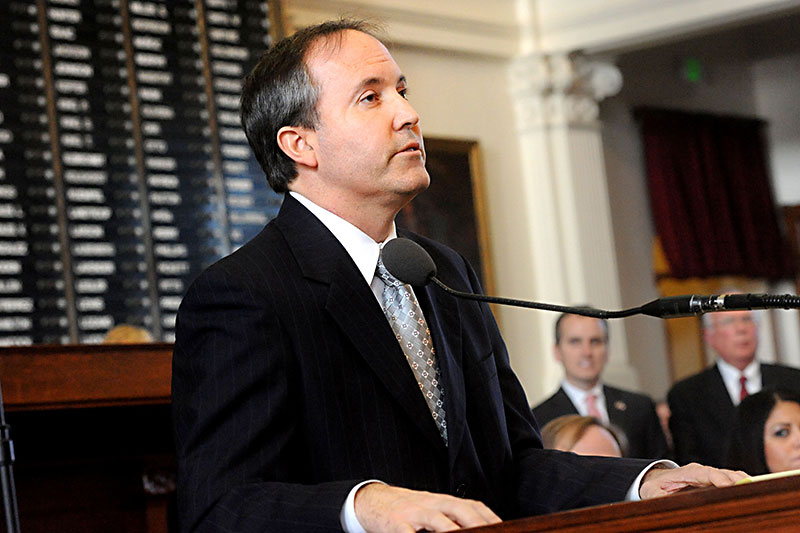 Ken Paxton and the Texas Public Policy Foundation have taken their battle against Austin's paid sick leave ordinance to the 3rd Court of Appeals. (Photo by John Anderson)

Conservative business interests – and the state of Texas – are continuing the fight against Austin's pending paid sick leave ordinance. This June, Travis County Judge Tim Sulak denied a request from the Texas Association of Business – represented by right-wing think tank the Texas Public Policy Foundation – to block the new rule, which grants employees up to 64 hours of paid sick time per year. So on Aug. 6, TPPF and Attorney General Ken Paxton's office filed motions with the 3rd Court of Appeals to put a temporary hold on the ordinance before it goes into effect on Oct. 1, and stymie the city's request for an extension to file its cross-appeal brief.

State attorneys believe "the ordinance should never see the light of day." To them, anything besides a block of the rule turns the state's relief from the banning of a pre-empted act to a "remedial cure that will put employers in the unenviable position of having to take away benefits to which workers will feel themselves increasingly entitled as this litigation progresses." In more anti-union and anti-workers' rights lingo, TPPF calls the ordinance an "unprecedented exercise of municipal regulatory power over private business."

City Council passed the ordinance in February, and since then other cities in Texas have tried to follow suit. Last month, Dallasites sought to place a similar rule on their November ballot, but a petition to do so fell short; activists have demanded a recount of signatures. San Antonio accrued enough petition signatures for the ordinance to soon face Council, but is being met with low-key threats from Paxton, who warned in a letter to Mayor Ron Nirenberg, "no matter the Council's decision or the result of any ballot initiative, Texas law preempts a municipal paid sick leave ordinance." Paxton and TPPF allude to a violation of the state's minimum wage law, but nowhere in that code about wages does it seek to regulate fringe benefits, like paid sick leave – perhaps our criminally indicted state attorney general should read the law more closely