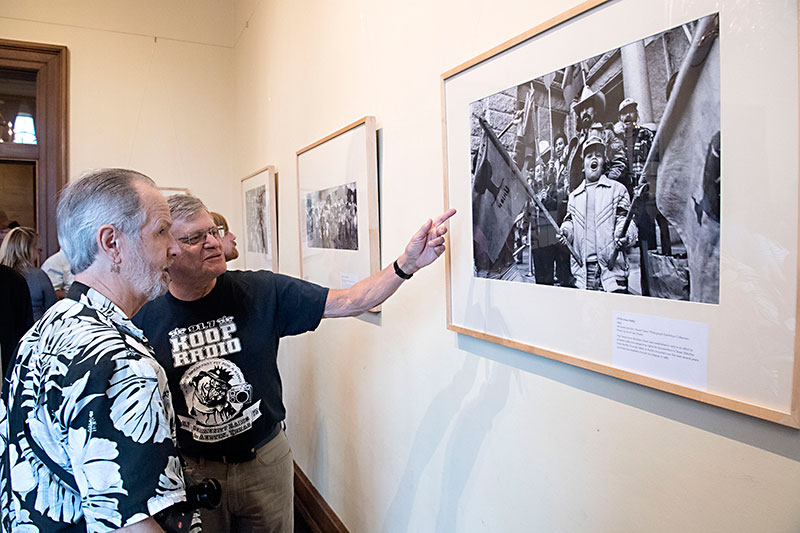 Documentary photographer Alan Pogue (l) and KOOP Radio's Greg Ciotti discuss Scott Van Osdol's photo of a Texas Farm Workers Union rally at the opening reception for the "Taking It to the Streets: A Visual History of Protest and Demonstration in Austin" exhibit at the Austin History Center on Tuesday. The exhibit runs through Oct. 28. (Photo by John Anderson)

Washington to Michigan: On Tuesday, the City Commission of Grand Rapids, Mich., voted to appoint Austin Assistant City Manager Mark Wash­ington as its new city manager. Washington has been an Austin administrator for nine years, including the last three as ACM with primary responsibilities over human resources and communications.

City Manager Shake-up: Washington's not the only assistant city manager who'll have a new job within the next few months. City Manager Spencer Cronk is planning to rearrange that level of the city's bureaucracy. See "Cronk to Reorganize Management Team," Aug. 3.

Mighty Mouth on Trial: Proceedings began Wednesday in the defamation trial of Alex Jones, as parents of a child murdered in 2012 at Sandy Hook Elementary School seek to hold Jones accountable for spreading lies about the school massacre. Jones is countersuing, claiming "free speech" under the Texas Citizens Participation Act.

Cops Behaving Badly: Austin Police Detective Chris Vetrano was arrested Monday and charged with animal cruelty and endangering a child after Kyle police say he struck a dog with a broom and put his son at risk of being bit.

And Paramedics, Too: Bret Burke was arrested in Cedar Park on Wednesday and charged with two counts of indecency with a child/sexual contact, one stemming from an incident in August 2014, and the other from last Christmas.

City water figures for 2017 are out, and wouldn't you know, Republican U.S. Congressman Michael McCaul and his family used more than anyone else. While the precise amount used is unclear, city data shows that the McCauls used more than 1 million gallons.

Beto O'Rourke has accepted Ted Cruz's recent challenge to debate five times over the next three months, but with a proposed tweak: a sixth debate on his home turf in El Paso.