County Officials to Get Big Raises

And Gerald Daugherty’s not happy about it Gerald Daugherty was not happy about receiving his big raise. (Photo by John Anderson)

Travis County commissioners voted almost unanimously on Tuesday to give themselves some plush raises. The 4-1 decision was part of a larger motion to increase the salaries of almost all county elected officials. County Judge Sarah Eckhardt and commissioners Brigid Shea, Jeff Travillion, and Margaret Gomez approved the raises, which will boost their own compensation by more than $13,000 each. Eckhardt will now make $140,945 a year – a 10% raise – and the commissioners will make $119,508, up 13%. Sheriff Sally Hernandez will get an increase of almost $9,000, to $155,238 a year, and County Treasurer Dolores Ortega Carter will get a bump of $11,411, bringing her to $113,980. Other elected officials will receive more modest raises.

Tuesday's vote represents just the first phase of three consecutive years of raises for elected officials, which the commissioners court has approved, saying the figures should be brought in line with salaries of elected officials in certain other Texas counties. The lone dissenter, conservative Gerald Daugherty, voiced his strong disagreement with the move. "Everybody knows that I'm not going to vote for this," he said on Tuesday. "In 2002, when I came on the court, the pay was $66,000. I don't know how in the world I am going to explain this to people. And I guarantee you, people are watching this – watching us take a committed 40% increase over the next three years and watching our salaries grow." 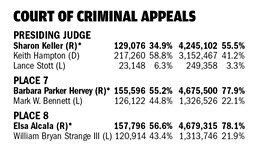 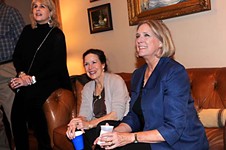 A GOP Win in Huber-Daugherty Replay
Gerald Daugherty is back