Allegations of Mistreatment at a Southwest Key Shelter 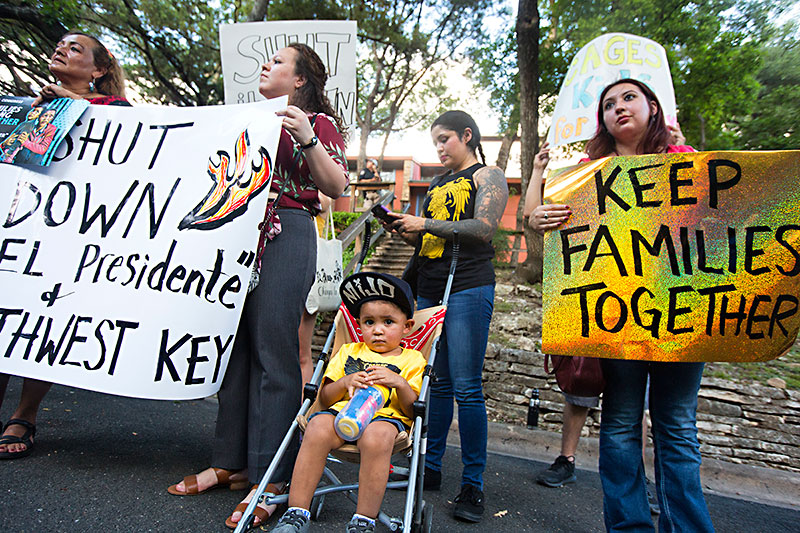 Death threats and gang violence in Gua­te­mala forced Blanca to flee to Texas with her 4-year-old daughter, the result of repeated rape by her brother-in-law, a "very violent man that the police do not bother at all." On May 24, the two were picked up by Border Patrol under the Trump administration's "zero-tolerance" policy and placed in detention. Feeling sick, Blanca was denied medicine and not permitted to shower for five days. They were then taken to the South Texas Family Residential Center in Dilley, Texas. During a meeting with ICE officials, she was forced to sign documents in English that she barely understood; her legal rights were vaguely explained to her.

New court filings detail disturbing stories of degrading conditions under the federal government's watch faced by more than 200 migrants fleeing violence largely from Cen­tral America who sought to make a better life in Texas, California, and elsewhere. The filings are part of a three-decades-old case, known as the Flores agreement, that helped gain better protections for migrant minors. It allows lawyers to examine conditions periodically and keep the feds accountable. In first-hand written accounts, migrants describe rotten food, soiled water, near freezing and overcrowded rooms, lack of medical attention, and lack of access to hygiene among the wretched conditions in U.S. Customs and Border Protection facilities and federal detention centers. Some also face insults and physical abuse. Attor­neys with the Center for Human Rights & Constitutional Law hope to secure a court-appointed "special monitor" to ensure that immigration officials rectify the violations. The "unsafe treatment of children continues unabated," the filing reads. "Rather than signaling a willingness to end their breach of the Agreement, defendants have doubled down on their breach seemingly for no other reason than that's what the President wants."

As a matter of policy, CBP does not comment on pending litigation, wrote a spokesperson. "However, lack of comment should not be construed as agreement or stipulation with any of the allegations. CBP takes all allegations seriously, and investigates all formal complaints."

The filings include harrowing stories of migrant adults and children, including those held at Casa Padre, a Brownsville youth shelter run by local nonprofit Southwest Key, and the largest such facility in the U.S. The East Austin organization has drawn ire over its decision to house children separated at the border, and faced criticism for lucrative government contracts and CEO Juan Sanchez's sizable salary ("The Duality of Southwest Key," June 29). State records show nearly 250 violations at SWKey's 16 Texas facilities over the past three years, the Chronicle found – and recent court filings reinforce a problematic pattern.

Elmer, a 15-year-old from Central Amer­ica, describes the fear he felt after being taken to a Border Patrol cell earlier this year. He's spent the past six months at Casa Padre. "They write reports on children acting up and breaking rules. I am afraid that if I get any report on me, I will not be released and it will affect my immigration status," he writes. "These kinds of rules make me feel like I cannot act like a kid like I used to." Elmer expresses a total loss of direction in figuring out how to break free from Casa Padre, writing he was never made aware of his rights under the Flores agreement and has not received access to an attorney. "I have no idea when I will be reunited with family here in the U.S."

Sergio was separated from his father when they tried to cross the border less than two months ago; he has only spoken to him for 20 minutes since then. "I had absolutely no idea what was going on and have been very scared," he writes in a testimony taken in July. When he cried over the situation in the bathroom, a Casa Padre staffer came in and asked him why he was being such a "cry baby" and proceeded to hurl swear words at the young boy. "It made me feel very bad and very ashamed," he writes. Another teenager held at Casa Padre, also named Elmer, alleges facility workers won't let him see a doctor, canceled a dentist appointment, and prevented him from attending church. They also make children spend time outside in the "unbearable" sun and do not provide sunscreen, he says. "They do not give us enough food and I am always hungry." Elmer says children are told if they escape Casa Padre they will be considered a "criminal" and the police will come looking for them. "There is no freedom here," he writes.

Jay Lozano of Frente de Liberación Inmi­grante, a newly formed local coalition critical of SWKey, told me the court declarations from inside shelters are "just more confirmation of a long list of abuses in direct contradiction to SWKey's claims that they 'do a better job,' and if they don't do it someone else will. They aren't any more humane than anybody else, which is why they don't deserve to act like it. SWKey isn't some passive provider – they are a willing partner in the immigrant detention and deportation complex." Asked to comment on those allegations, SWKey spokesperson Jeff Eller said that since the Flores litigation is proceeding, "it would not be appropriate to comment at this time."

Meanwhile, activists continue to protest the group, as they did outside Sanchez's home earlier this summer. Sanchez came to Austin to "co-opt nuestra gente," said Cynthia Valdez with LULAC District 7, one of the groups leading the protest. "He actively went out and sought approval to imprison babies and children. He is an enabler of Trump and the White House administration." The protest coincided with the court-imposed deadline to reunite all separated children. While the government has matched 1,820 children to parents, more than 700 children remain in government shelters because their parents have been deported, their cases are still under review, or they hold criminal records.

Underscoring the community divide, some LULAC District 12 members at the rally held signs in support of SWKey. San­chez appeared alongside the protest, saying he's willing to "sit down and have a conversation" with protesters and that he had brought snacks and water for them. "We want an opportunity to explain to them what Southwest Key does and why we do what we do," said Sanchez, his voice barely audible, drowned out by a bullhorn condemning their involvement in child separations.