“Morale Is Terrible” at the State Office of Administrative Hearings 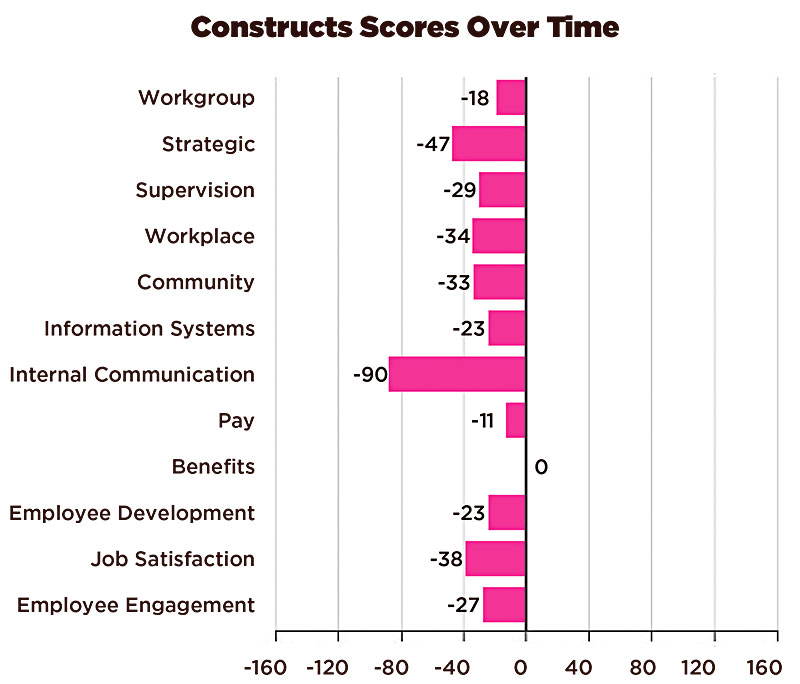 The 2018 "Survey of Employee Engagement" prepared for the State Office of Administrative Hearings, combines responses from employee questionnaires into related "Constructs" – "concepts most utilized by leadership" considering "organizational performance and engagement." From 2016 (when Lesli Ginn was appointed Chief Administrative Law Judge) to 2018, employee responses declined in 11 of 12 constructs. Note the authors: "Negative changes of greater than 40 points and having 8 or more negative construct changes should be a source of concern."

The fallout continues over the February firing of Administrative Law Judge Hunter Burkhalter at the State Office of Admin­i­strative Hearings. While SOAH employees hesitate to speak publicly for fear of retaliation, a recent employee survey reflects strong dissatisfaction with SOAH leadership, and a sharp decline in employee confidence during the two-year tenure of Chief Administrative Law Judge Lesli Ginn.

To recap: In late February, Ginn demanded Burkhalter's resignation "in lieu of termination." Ginn claimed that the ALJ's finding in a Texas Medical Board case showed evidence of sexist bias – citing one word ("attractive") to describe a female witness in a 77-page opinion. Burkhalter was an experienced ALJ, whom Ginn had promoted to a leadership position a few months before his termination; his forced resignation followed an unusual and aggressive complaint from the TMB over that same Burkhalter decision ("Can't Convict the Defendant? Convict the Judge," May 4).

In 2016, 71% of respondents agreed that “Upper management effectively communicates important information.” In 2018, only 31% agreed.

Baylor Law professor Ron Beal, an expert on Texas administrative law, described Ginn's action as "solely to appease" the TMB; Burkhalter himself said that Ginn "was cowed by the TMB, and she's concocting an after-the-fact justification." After the firing, Ginn reportedly told staff not to talk to the media, but several ALJs privately told me they were outraged by Burk­halter's dismissal. Others criticized Ginn's leadership more generally, noting in particular a lack of communication, disrespect for the independent responsibilities of ALJs, and the creation of a management team that features only a single judge (Deputy Chief ALJ Gary Elkins). One ALJ commented, "There is much disquiet and uncertainty that going forward, an agency disappointed in a ruling can go after the judge."

Recently, there's been more evidence of dissatisfaction among SOAH employees. The 2018 Survey of Employee Engagement, performed in April by UT-Austin's Institute for Organizational Excellence, reflects a marked decline in employee judgment of agency practices and procedures since the survey was last compiled (2016) – Ginn was appointed chief ALJ (i.e., SOAH director) by Gov. Greg Abbott in May of 2016. The 2018 survey shows sharp declines in every score measured (with the sole exception of "Benefits," set by the state and showing no change). The 12 categories include 48 questions eliciting employee judgments of their "Workgroup," "Supervision," "Pay," "Em­ploy­ee Development," etc.: 11 of the 12 show declining scores ranging from -11 points ("Pay") to -90 ("Internal Communica­tion"). The "Strategic" construct shows -47; "Job Satisfaction" is -38 (see graph).

According to the survey's authors, "Nega­tive changes of greater than 40 points and having 8 or more negative construct changes should be a source of concern for the organization and should be discussed with employees and organizational leadership." They also write, "Pay close attention to changes of more than 15 points in either direction. Were there any new policies or organizational changes that might have affected the scores?"

Noel Landuyt, associate director of the institute, noted that a 90-point decline reflects less than a 1-point change in the 5-point question scale used for the 48 questions (i.e., responses ranging from 5, "Strongly Agree," to 1, "Strongly Disagree"), and that smaller changes could be "normal fluctuation." But noting the consistent decline across all scores in the survey, Landuyt said, "You don't want that to happen. That data is meant to help an organization see what the concerns are, and they need to look closely at those changes."

A couple of more specific questions suggest sharp declines in employee confidence. In 2016, 59% of responding employees responded positively to Question 28: "My work atmosphere encourages open and honest communication." In 2018, that percentage is 34%. In 2016, 71% of respondents agreed that "Upper management (i.e. Exec­u­tive and/or Senior Leadership) effectively communicates important information." In 2018, only 31% agreed with that statement.

Privately, ALJs and other staff members say morale among SOAH employees is either low or "the lowest I've ever seen it." One ALJ told me that among 20 or more colleagues, including judges with 10 to 15 years' tenure, "the level of anxiety and morale is unlike anything I've ever seen." Recently, a long-tenured administrative assistant resigned and sent a message to other staff: "I have had the great privilege of working with you all for almost a decade. However, I find now that SOAH's policies and management no longer align with my values." Another ALJ commented, "Those who can leave [SOAH] have either already left or are planning to leave."

Asked via email if she had any comment on the survey results, or specifically on the sharp declines concerning management communication, Ginn did not respond directly. In a lengthy email, SOAH's general counsel, Cynthia Reyna, replied that SOAH is taking action concerning "information systems, pay, and internal communication," and is in the process of "modernizing its information technology resources" with a range of equipment upgrades. As a result of an agencywide salary review, she continued, "More than 50% of SOAH employees have received a salary increase."

Ginn's two-year appointment expired in May, but as yet Gov. Abbott has given no indication that he intends either to extend her tenure or replace her. Asked for comment on either that pending decision or on the survey results, the governor's office provided no response. 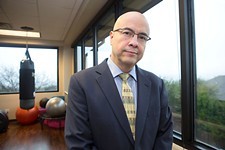 Van Boven, Medical Board Meet Again
The case heard before the 3rd Court of Appeals, thanks to Attorney General appeal 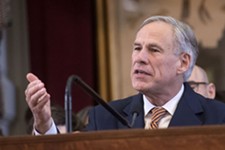