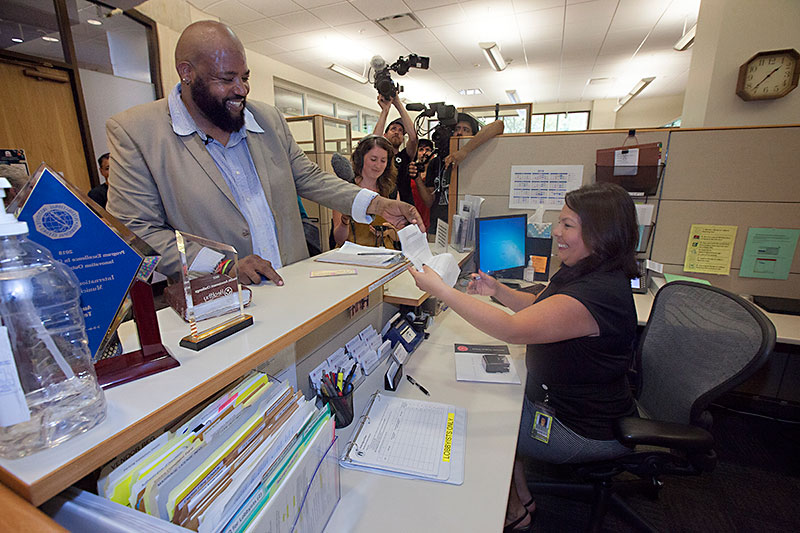 "You see, folks like me, we aren't supposed to run for office. Running for office was not a part of my parole plan. Could you imagine if it was?" Lewis Conway Jr. filed to run for City Council in District 1 on Monday, making him the first convicted felon to file for elective office in Texas. State law is unclear on whether ex-convicts can run for public office, but any challenge must come from his competition. More on that, and other election notes, on p.11. (photo by Jana Birchum)

School Board, Too: Candidates are lining up for the AISD Board of Trustees, as well. Kristin Ashy has filed to replace outgoing trustee Julie Cowan in District 4, and Yasmin Wagner has filed to continue representing District 7. See "Election Notes" for more info on the filings.

Eldridge Case Continues: The States­man reported on Tuesday that Chantal Eldridge's sexual assault case should go before a grand jury in August. Eldridge is the Democratic nominee for the 331st District Court, and is uncontested in November. She faces allegations that she sexually assaulted a teenage exchange student in 2006. Revisit "You Be the Judge," March 2.

Reuniting Deadline Dawns: This Thursday, July 26 marks the court-ordered deadline to reunite families separated at the border. As of press time, the Trump administration says 879 parents have been reunited; 538 have been cleared for reunification; and 463 are no longer in the U.S., meaning they may have been deported without their children.

Can the Confederacy: More than 40 state lawmakers want a Confederate memorial inside the Capitol gone. In a Statesman roll call, 38 House members (including four Republicans) – as well as six Democrats and one Republican in the Senate – are supporting the long-overdue effort.