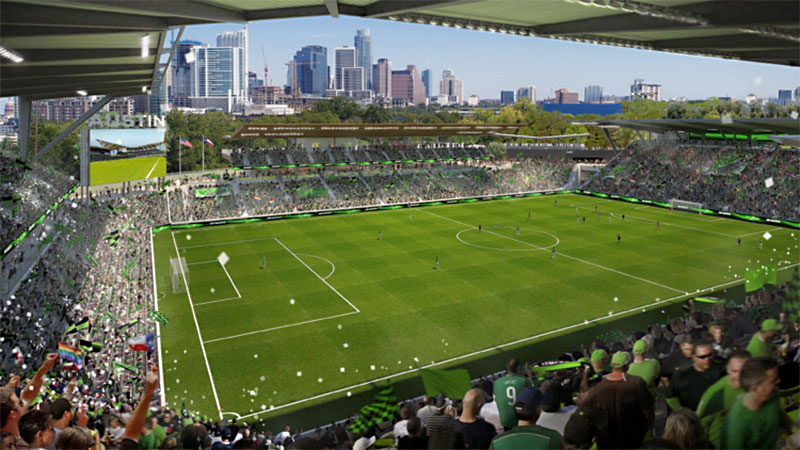 A rendering of the proposed soccer stadium at McKalla Place, the object of one's affection, or ire

Who's funding the Austin for a Better Future PAC, the group waging public opposition to Precourt Sports Ventures' plan to bring their Columbus Crew to Austin? The PAC popped up in late June and began promoting a video claiming a deal between PSV and the city would amount to a "billion-dollar giveaway" of taxpayer money. The claim has since been debunked by several economists, and the PAC's campaign finance reports revealed that the group received a single pledge of $30,000 from another PAC – former City Council Member Don Zimmerman's Travis County Taxpayers Union – and zero dollars in political contributions.

Under state law, money pledged to a political group need not be paid immediately, or at all. However, despite not having received any actual contributions, the ABF PAC racked up $25,792 in "unpaid incurred obligations." Basically, they contracted services such as video production ($2,000), an advertising plan ($15,450), and the printing of mailers and door hangers ($6,185.40) by agreeing to pay the service providers at a later date.

Zimmerman's former Public Safety commissioner Bill Worsham is listed as the campaign treasurer for both the TCTU and ABF. It is unclear at this point what the implications of the former pledging funds to the latter – as opposed to just contributing the funds – might be, but ABF's critics have suggested it's a way to conceal the identity of the individual(s) behind the $30,000 pledge. If the TCTU had contributed the money instead of pledging it to ABF, the names of the donor(s) would have been revealed on the campaign finance report. Now, that disclosure can be delayed until after Council makes a final decision on the soccer deal. Worsham said a "need to shine light on the deal arose rather suddenly" close to the campaign finance reporting deadline, so money was pledged to ABF instead of contributed to avoid running afoul of state ethics rules. He anticipates the pledge being fulfilled before the next reporting period.

What's In It For Us?

Last week, the city held a forum at the Central Lib­ra­ry to gather input on what community benefits city negotiators should pursue in their discussions with PSV. The gathering played out similarly to the public comment period at the June 28 meeting where Council voted to proceed with pursuing a potential deal with PSV: Supporters of the deal talked about the "unifying" potential a Major League Soccer team could bring to the city, while opponents – a smaller but vocal group – questioned the impact that a 20,000-person stadium would have on the surrounding neighborhoods, as well as the potential loss of millions in property tax revenue.

Some of the MLS supporters also expressed apprehension over the city potentially forgoing property tax revenues. Council Member Leslie Pool, who represents the area where the stadium would be located, attended the meeting and afterwards shared her appreciation that both sides of the debate housed a certain degree of skepticism over the taxes issue. Furthermore, Pool said that when Council returns on Aug. 9, the body would not necessarily be voting on whether or not to cement a deal with PSV: "I would be surprised if the two parties [PSV and the city] could move together that quickly, because they are pretty far apart."

Expect to get a glimpse of the negotiated terms soon. Economic Development Department Interim Director Rebecca Giello said after the meeting that she expected the terms of the deal to be posted along with a preliminary agenda for the Aug. 9 meeting two weeks before that date, meaning the public could have access to the deal's details by the time you read this.