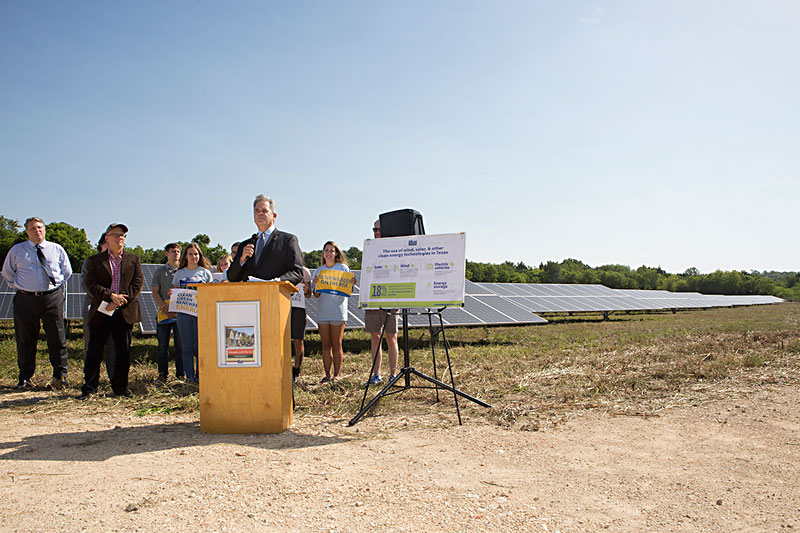 Mayor Steve Adler joined environmental advocates Wednesday at the La Loma Community Solar Farm in East Austin to tout the release of "Renewables on the Rise 2018," an Environment Texas report on a decade of progress toward clean energy. The big news up front: The United States produces six times as much renewable electricity from the sun and wind as it did in 2008. See the full report at www.environmenttexascenter.org (Photo by Jana Birchum)

City Council's still on break for a few more weeks. Next regular meeting is set for Aug. 9.

The CodeNEXT petition will be on the election ballot in November, following a Monday ruling by Travis County District Judge Orlinda Naranjo. See "About That CodeNEXT Petition ..." and "Beside the Point," July 20.

Travis County Sheriff's deputies will now be equipped with naloxone, thanks to a contribution from the Texas Overdose Naloxone Initiative. The medication is designed to counteract the effects of an opioid overdose.

Campaign Finance Reports for Q2 2018 are in, and no surprise, Mayor Steve Adler leads the local field in fundraising, with more than $500,000. See "Election Notes," July 20.

A Saharan Dust Cloud has descended upon Austin and seems intent on staying (doesn't everybody?). If your allergies are worse this week than usual, thank the dust cloud.

A Trump-appointed federal judge has ruled against Planned Parenthood and the National Family Planning & Reproductive Health Association's challenge to changes to the Title X program, health funds that serve low-income women. That means the funds could flow toward faith-based groups that downplay contraception and emphasize abstinence. More than 200,000 Texans rely on Title X.

A different judge has delayed "mass deportations" of immigrant parents after they've been reunited with their children, to give parents time to decide if they want to seek asylum or go back to their home country, as per an emergency request filed by the ACLU. The federal government has until July 26 to reunite roughly 3,000 children separated from their families as a result of Trump anti-immigrant policies.

End Gay Panic Sen. Edward Markey, D-Mass., and Rep. Joe Kennedy, D-Mass., introduced congressional legislation that would prohibit the use of "gay-" and "trans panic" defenses in federal courts. The text argues these "defenses characterize sexual orientation and gender identity as objectively reasonable excuses for loss of self-control," appeal to "irrational fears and hatred" of LGBTQ people, and often result in "unjustifiable acquittals or sentencing reductions." Earlier this year in state court, James Miller used the "gay panic" defense to reduce his sentence to six months in jail and 10 years of probation for the 2015 murder of Austin's Daniel Spencer.