AISD: Thinking Outside the Schoolhouse

A committee of Austin Independent School District stakeholders tasked with conceiving ways to cut into the district's growing budget deficit met for the second time on Monday. AISD will operate at a $30 million loss in the 2018-19 school year, forcing district officials to again dip into its dwindling reserve fund, a process that district accountants have projected will continue if austerity measures are not taken. The Budget Stabilization Task Force has been charged with identifying and recommending to the AISD Board of Trustees solutions to the district's ballooning deficit.

The district's reserve fund is projected to fall to about $210 million after that school year, while the deficit could double in 2019-20 and continue growing beyond that – meaning the reserve fund might be depleted in just a matter of years. If that happens, AISD's Chief Financial Officer Nicole Conley Johnson explained, the district could face an entirely different set of challenges: "If we spend through our reserves, it could lead to oversight from the state, reputational damage to the district, and increased cost to the taxpayer through higher interest and borrowing costs" as a result of lower accreditation ratings. 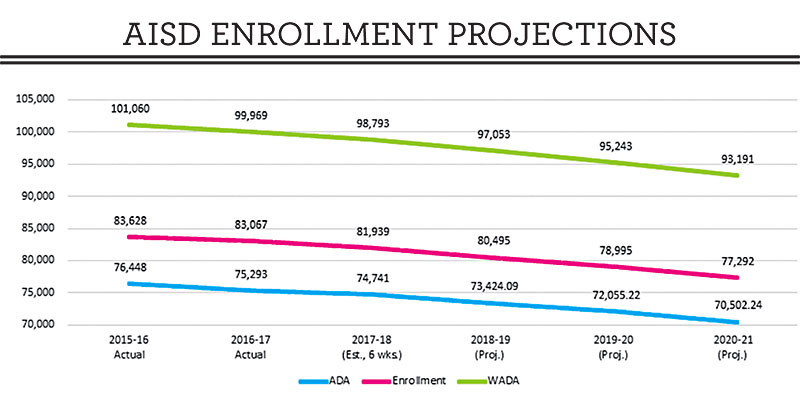 Enrollment at AISD schools has been on a slight decline over the last three school years, and is expected to continue decreasing over the next few years. By the 2020-21 school year, officials anticipate 6,000 fewer students will attend AISD schools than did so in 2015-16. ADA means "average daily attendance," for the number of actual students in attendance on the average school day. WADA means "weighted average daily attendance," and is based on specific district characteristics.

How did the district get to this point? An obvious culprit is the state's school finance system, which relies on a scheme known as "recapture" to take property tax revenues from "property wealthy" districts and redistribute them to "property poor" districts. The funding system employs complex formulas that dictate how resources are allocated from the state's general fund to the 2,000 school districts, but many of those formulas have not been updated for decades. The result is a system that has been largely unresponsive to the challenges school districts currently face. Additionally, school funding is a continually shrinking line item in the state's budget. Ten years ago, state and local entities split the cost of education about 50-50; but in 2017, close to 60% was paid with local revenues.

But it's not just state leaders who are responsible for AISD's budget shortfall. Conley Johnson pointed to costly district initiatives such as its fine arts academies and its commitment to funding full-day pre-K – neither of which are required by state law, although they are important to the many AISD parents. If those programs were scaled back, the district could save millions, but uproar from parents could lead to acceleration of another district challenge: decreased student enrollment.

State education funding is partially determined by student attendance, so with fewer students attending Austin schools comes less cash from the state. AISD's student enrollment has consistently declined since the 2011-12 school year. In 2017-18, nearly 82,000 students attended the district's 130 schools, but that figure is projected to drop to about 77,000 by 2020-21.

District officials attribute the shrinking enrollment primarily to the rising cost of living in Austin. About half of the students who leave AISD go to a neighboring district where home prices are lower, costing the district millions in state funding. Conley Johnson said the district has no control over these factors. "Everything that's happening [financially] to the district is beyond our control," she said. "It's the state that controls the funding formulas, we can't control gentrification ... and we can't control where people move to. The affordability issue is totally beyond our control."

The issues driving AISD's deficit increases won't change soon, so the district must do something to stave off a looming budgetary crisis. Hence, the Budget Stabilization Task Force. Conley Johnson said "nothing is off the table" for the 31-person committee; the AISD Board of Trustees is interested in hearing any and all ideas that could slow the deficit increase – from partnering with local businesses and other organizations to provide services outside the classroom, to "consolidating campuses" in an effort to close the funding gap created by decreased enrollment.

For the task force to succeed in recommending meaningful ideas to the school board, they will have to make difficult choices. "Consolidating campuses" is another way of saying "close down schools," which would increase the teacher-to-pupil ratio, and could affect student performance. But it would also save the district in utility costs (AISD spends about $25 million annually on utilities), and allow the district to leverage the city's skyrocketing property values by selling or leasing former schools.

One of the task force's tri-chairs, Robert Thomas, spoke enthusiastically on Tuesday about the group and their work ahead. He acknowledged that potentially cutting programs, reducing staff, or closing campuses would be difficult ideas to recommend, but said it was time for school leaders to seriously consider those tough choices. "We do not want to have the district kicking the can down the road anymore," Thomas said. "The deficit issue has got to be resolved, period."

It's too early to infer what the task force's recommendations will look like (the first two meetings were aimed at educating committee members on school financing and how the district spends its billion-dollar budget), but Thomas was confident that the group would be able to settle on meaningful recommendations to the board – just not within the time frame initially outlined by district staff. The group currently has its final meeting scheduled for Aug. 15, but Thomas indicated that the task force would likely continue working into December.

Judging by the tangent-prone discussion held by the group on Monday, that's a safe bet. Thomas reasoned, however, that a "deliberative pace" is critical to the group's success: Representing a diverse set of interests throughout the AISD community is a key aspect of the task force's mission, and that means hearing everyone out.

That may be true, but with such a large group, disagreements over budgetary priorities are sure to arise. One moment on Monday night stood out as a possible harbinger of what those disagreements could look like. A parent on the task force questioned why the district would pay for a reading training program called MyON, which reads books aloud to students. "I tell my kids not to use it, so why are we spending money on it?" the parent asked. But before he could finish his point, another parent interjected: "My kid loves it." Thomas intervened to keep the discussion on track, but the foreshadowing was made evident. When a student becomes attached to a district program, their parents will fight to keep it.

This story has been updated to accurately reflect the school district's annual utility bill. It is $25 million, not $35 million, as previously reported.

Has Austin Resource Recovery Found a Solution to Its Chronic A/C Problem?
Taking the heat off local garbage collection trucks