TSTEM Coalition Steps in at Mendez

A plan to save a school 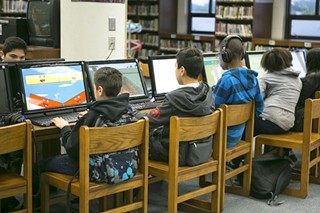 The Texas Education Agency approved a partnership last week between Mendez Middle School and the Texas Science, Technology, Engineering, and Math Coalition to help improve the struggling school's accountability rating. TEA has rated Mendez "Improve­ment Required" for four years in a row, and a fifth could result in the Austin Independent School Dis­trict closing the school down (2017-18 ratings are expected in August). To avoid that fate, AISD invoked a new law passed by the Texas Legislature in 2017 that pauses the rating system at a specific campus for two years and provides additional funding to the school (in Mendez's case, about $1,900 per student), if the district partners with a state-approved group to develop a "turnaround plan" for the campus.

In April, AISD's Board of Trustees approved the TSTEM partnership, and the organization has been working with Mendez faculty on changes since June. Dr. David Simmons of TSTEM will lead the school as its "Executive Director," and an AISD employee will serve under Simmons as "Director." TSTEM will also assemble its own board to govern hiring, budgetary decisions, and curriculum changes; though the AISD board will still set goals for the school. AISD Chief of Staff Jacob Reach viewed the coming partnership with optimism on Tuesday. "We feel that we have a really good partner that works with the community and we're excited to go forward," he said.