Public Notice: “Gerrymandering Is Not a Game” 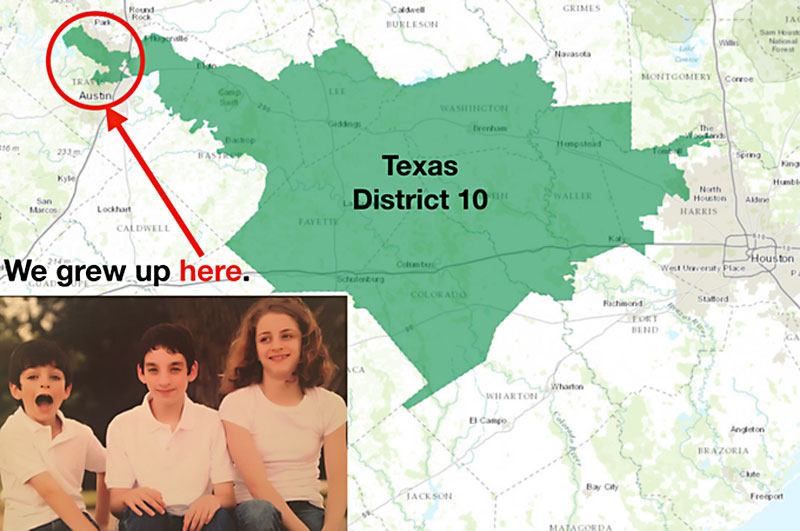 "We're three siblings from a gerrymandered district in Austin, TX. We wanted to spread the word about gerrymandering, so we invented a board game."

In view of the recent U.S. Supreme Court decision not to intervene in Texas' egregiously gerrymandered House and congressional district maps ("SCOTUS Lets Gerrymandering Slide," June 29), the timing couldn't be better for Mapmaker: The Gerrymandering Game, the first game release from Lafair Family Games. "We're three siblings from a gerrymandered district in Austin, TX," says the campaign page. "We wanted to spread the word about gerrymandering, so we invented a board game."

"The more I learned about gerrymandering," says high school senior Josh Lafair, "the more I realized how terrible it is for our country. Today's partisan divide can be traced back to gerrymandering. Noncompetitivedistricts take away the incentive to compromise, so politicians don't need to reach across the aisle."

The Lafairs insist this is a thoroughly fun and playable game in its own right. After all, oldest brother Louis, who just graduated from Stanford University, invented the award-winning Pathwayz board game at the age of 11 and got it published and distributed. And Mapmaker already boasts an enthusiastic plug from Steve Jackson, the dean of Austin's gaming community. But they hope players can learn from the game as well. Says Louis: "We've noticed that halfway through their first game, players often comment, 'I finally get how packing and cracking works.' Then they have deeper conversations about gerrymandering afterwards."

The Lafairs just launched a Kickstarter page this week to complete production, got fully funded within six hours, and hit their first stretch goal on day one. But you can still jump on the bandwagon, and the campaign includes an interesting twist: Pledge $70 or more, and in addition to the game you get, they'll send one to your governor or state legislator. Pledge more, and you can get the message to more lawmakers. Buy the "Super PAC," for instance, and you get five copies of the game for yourself, plus they'll send copies "to ALL 9 Supreme Court justices, ALL 32 governors who have VETO power over gerrymandered maps, and ALL 37 state legislatures that DRAW gerrymandered maps"

"We want all members of your state legislature to get multiple copies of Map­mak­er," say the Lafairs. "To remind them, before 2021 redistricting, that gerrymandering is not a game."

Austin Green Awards just launched its call for entries for 2018, taking nominations for buildings and sites, including landscapes and infrastructure, in the five-county Central Texas region, recognizing "outstanding accomplishments in the broad arena of sustainable design and innovation." Submit nominations now through Sept. 10 at www.atxgreenawards.org; the awards ceremony will be held on Oct. 24 at the Sunset Room in Downtown Austin.

Special events rules: The Austin Center for Events continues to take input on the rules for the city's new special event permitting process. Attend the next meeting, 2-4pm Tue., July 17, at the Central Library, 710 W. Cesar Chavez, or give feedback online at www.austintexas.gov/citystage.