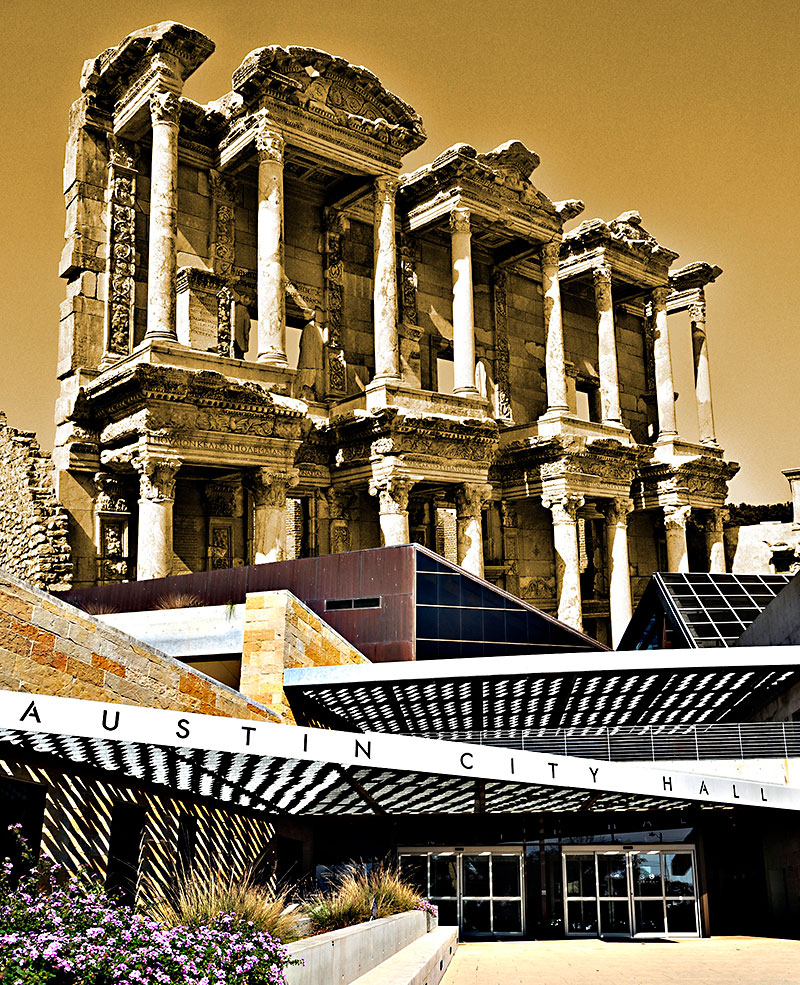 It felt as if centuries had passed by the end of the last City Council meeting. (Photo by the Chronicle Art Staff)

It's only fitting that the last City Council meeting before the summer break would clock in at a mind-boggling 17 hours, and include approval of a $925 million bond proposal that includes a historic $250 million in affordable housing dollars, deregulation of the taxi industry, an extended Austin Rowing Club row, and a decision at long last to start negotiating a deal that would bring Major League Soccer to Austin (p.12). With their adjournment just before 4am on Friday, June 29, members officially clocked out for the July recess, in which they'll take a well-deserved breather from briefings, public hearings, their own interpersonal squabbles, and, of course, CodeNEXT. Hope they enjoy the R&R; they'll be back for a regular meeting Aug. 9, when all of those vexations will come rushing back.

Mayor Steve Adler called the $935 Million bond proposal “a significant and major statement about who we are as a community, and what our priority is and what our value is.”

What started as an $815 million bond proposal eventually grew by $110 million due to pressing needs in each of the funding buckets. CMs added another $7 million in pool funding, a $12 million boost for the Mexican American Cultural Center, and $12 million in creative space dollars. The bloc advocating for $300 million in affordable housing spending didn't get exactly what it asked for, but Council will put its largest request ever in front of voters in November. That money will go toward land acquisition, rental housing assistance projects, and homeownership and home repair programs. Mayor Steve Adler called the move "a significant and major statement about who we are as a community, and what our priority is and what our value is."

That isn't to say everyone was in agreement on the scale of such an investment. Predictably, Ellen Troxclair gave a tired sermon calling the decision to invest in housing instead of roads (which also got nearly $180 million in funds) a "strategic mistake." Jimmy Flannigan closed the conversation by harshly criticizing the process, saying that the Bond Election Advisory Task Force had passed the tough decisions on prioritization to Council, and that he and his colleagues were shirking that responsibility. Nevertheless, the beefed-up bond passed 8-3 (with Troxclair, Flannigan, and Ora Houston voting no). Besides the housing portion, the final version included:

•$149 million for parks and recreation;

•$38 million for public safety; and

•$16 million for health and human services.

A New Era for Austin Taxis

Times were already changing for Austin cabbies. But with its action on Thursday, Council essentially ripped the Band-Aid off. For decades, way before the arrival of transportation network companies, the cab industry has worked under strict regulations that govern the number of drivers companies can have on the road, how much they charge, what their cars look like, and how they calculate fares. The new rules will loosen a lot of those regulations; Trans­port­ation Director Robert Spillar told Council the "overhaul" is an effort to allow the companies to compete in today's market without those burdens.

Though the change is inevitable when you consider that the state just made it so TNCs can operate without municipal meddling, it's easy to see why a vocal contingent of industry players showed up to express their concerns about the new era. Late last year, when staff was still working on the proposal, Austin Cab's General Manager Ron Means predicted the monumental shift would create "chaos" in an industry already struggling for breath. Only time will tell if the city's move helped or hurt.

The night might not have stretched on quite so late had the group not taken an early detour because of CM Houston's objections to a deal to direct $6 million of Capital Metro quarter-cent funds back to the organization so it can finish its Project Connect study on high-capacity transit, which is of interest to anyone who lives in Austin proper or accesses it via the surrounding metro. Houston pushed back strongly against the proposal both during Tuesday's work session and the regular meeting on Thursday, complaining that the city would be giving away cash that could be used for a tangible community benefit in exchange for a promise of high-capacity transit that may never be fulfilled.

That put Houston at odds with CM Ann Kitchen, who advocated for approving the measure without delay. She told Houston the city wasn't "doing something for Cap Metro," but merely helping it with a component of work that's already in progress. In a statement after the proposal passed, Houston bemoaned the fact that the city entered into the partnership with Cap Metro "even though for the last three years as council member I have witnessed the voices and priorities of many transit dependent Austinites, whether by necessity or preference, be silenced or simply ignored. Here is yet another example of that disregard and lack of consideration for the needs of parts of the broader community."

Hours after Adler called the meeting adjourned, council members were already scattering for the July break. After a hectic spring, everybody more than deserves a little time to kick their shoes off and put their feet up. But that'll only last a few short weeks. There's a regular meeting scheduled for Aug. 9. Once the CMs return, it won't be long before they become embroiled in budget talks. They, along with City Manager Spencer Cronk and Deputy Chief Financial Officer Ed Van Eenoo, have been circling the city for the past several months to find out what constituents feel should take priority. The really tough part will be reconciling those competing interests when it comes to putting together the final product. We wish them luck.