Soccer in Austin: The Knockout Stage 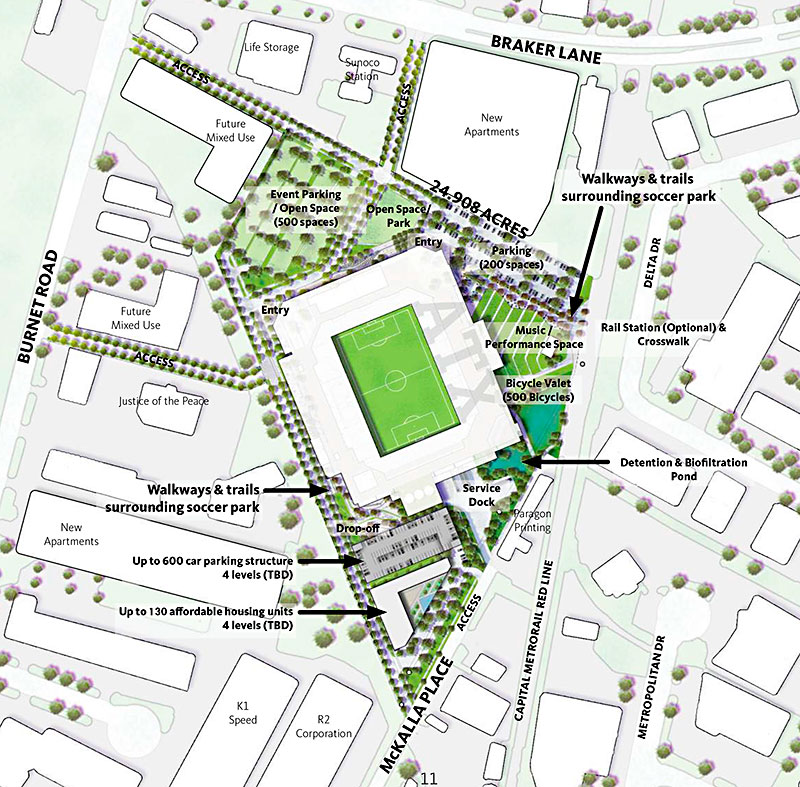 Precourt Sports Ventures' new proposed site plan for McKalla Place, now including space for 130 units of on-site affordable housing, in the southern corner of the space

Anthony Precourt finds out today (Thurs­day) if he cleared the first political hurdle in moving his Columbus Crew MLS team to Austin, as Council will vote on two resolutions: Item 60, brought forth by Leslie Pool, which would allow developers to submit their own plans for McKalla Place; and Kathie Tovo's Item 130, directing City Manager Spencer Cronk to pursue negotiations with Precourt Sports Ventures on a potential stadium deal. (Council will also consider Item 117, to approve $200,000 in funding to retain Greenberg Traurig LLP, in the event that negotiations with PSV continue.) Item 130 was updated on Monday to include a key phrase directing Cronk to "solicit plans for the development of affordable housing on another City-owned tract."

The addition at this stage is sure to be attractive to the three council members who are not sponsoring either item (Greg Casar, Ann Kitchen, and Jimmy Flanni­gan). It also serves to minimize the argument made by Pool and Alison Alter that a stadium deal at McKalla could detract from the city's mission to build affordable housing on publicly owned land.

The week leading up to Council's vote has seen a flurry of activity: mailers urging residents to turn up for the Thursday meeting; online campaigns directing calls and emails to sponsors of both resolutions (and, critically, the three CMs in the middle); NextDoor threads with 100-plus replies, pitting neighbor against neighbor; and States­man editorials have all contributed to the deluge of information being thrown at city residents. On Tuesday, PSV released an updated conceptual rendering of a "stadium and soccer park," including on-site affordable housing (130 units) and an additional four-level parking structure that could hold up to 600 cars, up from 300. Presumably, the parking spaces would also be used by the people living in the housing units, so it's unclear how much the additional spots would alleviate community concerns about game day parking.

But the possibility of on-site affordable housing directly addresses complaints from neighborhood groups opposed to the deal. For weeks, the Gracywoods Neighborhood Association and others have asked why the city should "give away" land deemed suitable for affordable housing. Although the number of proposed housing units on-site is much lower than the 500 sketched out by another developer, it undermines the argument that the stadium deal would take away land that could be used for affordable housing. Repre­sent­atives for PSV stressed that the plan is conceptual, and as of now, the amount of funding PSV has committed to Foundation Communities ($500,000 upfront, with $125,000 per year up to a total of $4.8 million) would not change. PSV's Austin-based attorney Richard Suttle said the concept was "an interesting idea that warrants discussion" and that "PSV remains open to negotiating elements that result in the successful realization of a Major League Soccer stadium" at McKalla. In an emailed statement, Pool said of the new plan: "Affordable housing is a key goal, along with limiting stadium subsidies and supporting public transit. I'm looking forward to seeing everyone put their best foot forward on this issue so we can have all our options on the table."

Pool's office shared property tax estimates that detail what surrounding taxing entities could stand to lose out on should the city maintain ownership of the stadium and McKalla lot. These assume the value of the land to be $29.5 million – based on a 2016 third-party appraisal commissioned by the city – with an additional "improvement value" of $200 million based on PSV's estimated construction cost for the stadium. With an estimated value of $229.5 million and a "moderately conservative" tax rate increase of 6%, the calculations show the main taxing entities in the area (City of Austin, Travis County, Austin Independent School District, Central Health, and Austin Community College) could lose out on about $6.4 million in tax revenues over the first five years of the deal. After 20 years – the initial term of the lease proposed by PSV – the taxing entities could have lost out on about $186 million. Those aren't official numbers, but according to the Travis County Tax Office, the formulas used by Pool's office are a reasonable way to estimate property tax revenue from a piece of land with "property improvement" built on it.

Resistance to the stadium has grown more organized in recent weeks. A group calling itself "No Soccer Subsidy" put together a rally to call on Council to open a request for proposal process on the lot before accepting PSV's offer. About 40 people gathered in the Jimmy John's parking lot at the corner of Braker and Burnet (just behind McKalla Place) last Saturday to voice concerns about the deal. A hodgepodge of public figures were on hand to speak, representing a strange brew of interests opposed to the potential land deal.

AISD Trustee Ann Teich took aim at the potential loss in property tax revenues, saying that the local school district, already suffering from a state school finance system that siphons funding through recapture payments, was in no position to turn away potential tax dollars. "There's so much money that goes back to the state," she said. "We need every dollar we can get."

However, 40 people constitutes only a small gathering, and as the rally got underway at 10am, bars across the city were filled with soccer fans for the World Cup. Austin has boasted some of the highest TV ratings in America for WC broadcasts, bolstering the notion that the city is primed for an MLS team.

Precourt's Austin-based consultant Mark Littlefield was energized by those figures, and remained optimistic about the Thurs­day vote. But he acknowledged that even if Item 130 passes, the real work to bring MLS to Austin would just be getting underway. "No matter how much the city loves soccer," he said, "there is still a lot of due diligence left to do to make sure the city is protected and getting the best deal possible."