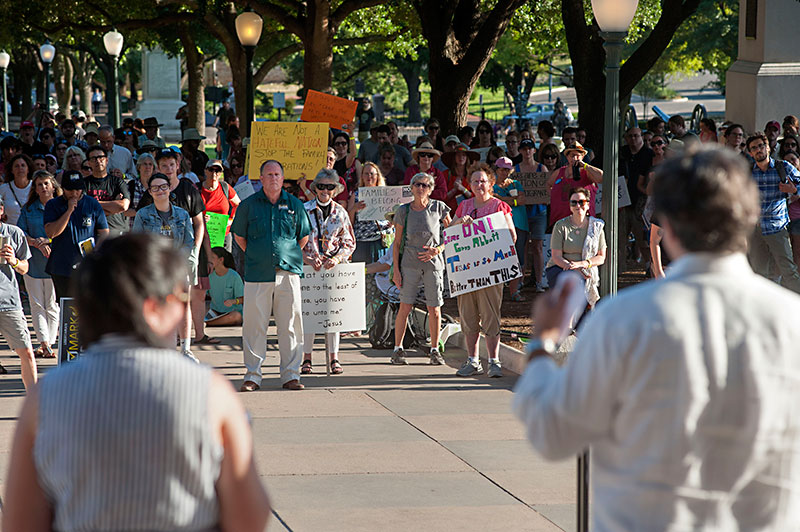 Residents watch as state Rep. Eddie Rodriguez delivers a speech at the Capitol last Thursday to protest the Trump administration's decision to separate migrant children from their parents. There's another Capitol rally planned for Saturday, June 30, from noon to 3pm, in coordination with a number of similar rallies throughout the country. (Photo by John Anderson)

No City Council meeting this week. Members were scheduled to discuss CodeNEXT on Thursday, but canceled that meeting so they could visit the tent city housing immigrant children in Tornillo with the U.S. Conference of Mayors.

Four Council Members – Ora Houston, Leslie Pool, Kathie Tovo, and Alison Alter – held a press conference on Tuesday morning, describing the current draft of CodeNEXT as inadequate, and advocating revisions to make the land use code more "context-sensitive" of neighborhoods, and responsive to community input. They said they will be proposing amendments to make the code more equitable and "community-driven." See "A PATH Forward for CodeNEXT?" June 22.

More on Council: Their last meeting before summer break is next Thursday, June 28. Among the already 100-plus Items: two that concern McKalla Place. See "McKalla Place, Take Your Pick: Soccer Stadium or Affordable Housing," June 22.

Money, Money, Money: Austin ISD adopted its FY 2019 budget this week, at a grand total of $1.4 billion, a 1.5% pay increase for all employees, and the prospect of spiking "recapture" payments to the state estimated at $670 million, likely meaning a $29 million hit to the district's reserve fund. See "Austin ISD Budget: $1.4 Billion," June 22.

John Fregonese of Fregonese Associ­ates passed away this week. He was the city's primary consultant on the affordable housing aspect of the CodeNEXT land use code revision, and had been the lead consultant on the Envision Central Texas comprehensive planning process.

Habemus Police Monitor: City Man­ag­er Spencer Cronk removed the interim tag from Farah Muscadin's title, making the attorney the permanent police monitor for the city of Austin. Muscadin has been busy this summer surveying oversight practices at other police departments throughout the country, and her findings should play an integral role in contract negotiations with the Austin Police Association moving forward.

Sen. Carlos Uresti, D-San Antonio, resigned his post on Thursday, just a few days before he faces sentencing in federal court over 11 fraud-related counts. Uresti could see prison time and payments of more than $3 million. A special election to replace Uresti has been set for July 31.

A man claiming to be Taylor Swift set fire to the Austin Club on Monday, and is currently booked on arson charges.