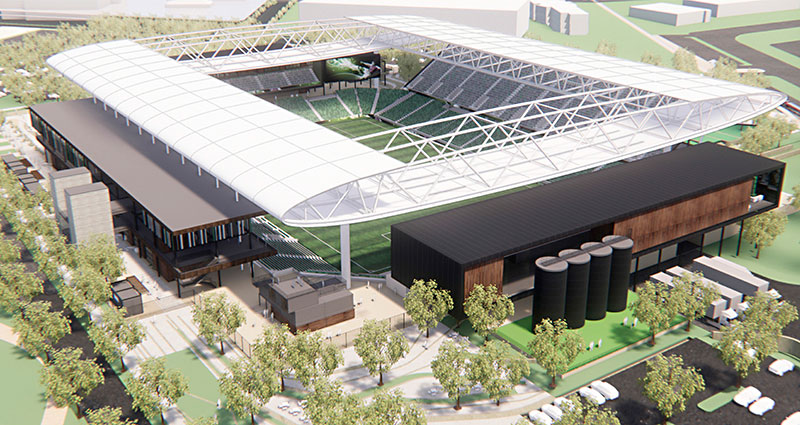 Last Friday, city staff released its report declaring McKalla Place "viable" for a soccer stadium, and later that day, Precourt Sports Ventures released their plan to build what they call a "legacy asset" for the city. Although many Council members have been unable to delve into the city's 34-page report, let alone Precourt's 189-page proposal (they're a bit busy with a project called CodeNEXT), those who did comment didn't do so in committed fashion.

Leslie Pool, who represents District 7 where McKalla is located, tempered enthusiasm for the city's report, noting that staff only acknowledged the site's viability for a stadium. "What is suitable for the site may not be what is most desirable for the site," she said, while anticipating plenty of hay to be made of Precourt's offer. Her colleague Alison Alter shared that same view of the city's report: More analysis would be needed to determine if Precourt's proposal is in the best interest of the city.

Some of the information included in that proposal had been established: a projected $354 million in community benefits to the city over 25 years; the $200 million, 20,000-seat stadium, fully financed by PSV; and a plan to devote more than half of McKalla's acreage to "open and accessible space." The city report supported PSV's claims of an economic boom for the city: Third-party analysis firm Brailsford & Dunlavey forecast a $384 million boost in economic activity and $332 million in wages over a 20-year period. Travis County could gain another $90 million and $130 million, respectively.

But PSV also provided insight into how they hope to structure a deal: The city would retain ownership of McKalla Place, infrastructure surrounding the stadium, and the stadium itself once construction is completed; and the city will be responsible for "all site preparation, remediation and off-site infrastructure," raising the eyebrows of those council members. The city report found that roughly $15.9 million in infrastructure costs would be required to improve water transmission systems and transit ($13 million for a new rail station). PSV President Dave Greeley said the language is "part of a broader conversation with the city," and that according to the reports they had reviewed, further remediation on-site would be unlikely. 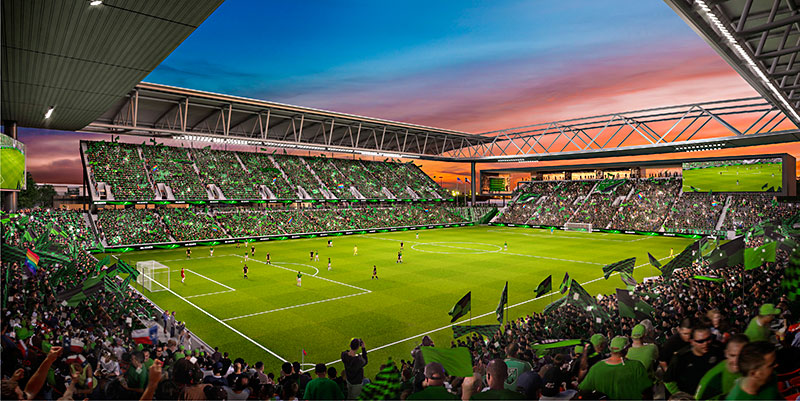 A rendering of the proposed soccer stadium's interior

With city ownership of the land and stadium, PSV would be exempt from paying property taxes – no small handout at a time when rising taxes are the central focus of some residents. But PSV wouldn't be getting the lot for free – rather, via a 20-year lease at $1 per year, the "most amusing" aspect of the proposal, said Pool. PSV would have the option to renew the lease for three more 20-year terms, at that cush fixed rate.

The proposal didn't much expand on established community benefits. In March, several nonprofits were name-checked as potential partners, but they were absent from the Friday proposal. Mark Littlefield, who's consulting with PSV, said those partnerships were still in the works: "The foundation of what we do is youth soccer."

One benefit that did receive more attention, however, was a partnership with Foundation Communities to provide affordable housing throughout the city. An initial $500,000 investment from PSV would go toward building the Waters Park Studio development near McKalla, and another $4.3 million would be invested into the nonprofit over 25 years. PSV hopes the partnership will impress council members who have floated affordable housing at McKalla, like Pool, who said she had prepared a resolution directing the city manager to "dig more deeply" into McKalla's other options. "It may be useful for the city to issue a request for proposal, so that the best and most comprehensive proposal could be brought forth," she said.

Two such options manifested Tuesday night, when representatives for Capella Capital Partners and Whitfield-Chen presented ideas to a Gracywoods Neighborhood Association meeting. Capella already owns three acres next to McKalla Place, which they plan to use for an 11-story office building and 22-story "downtown style" residential building with about 285 units sold at market rate. Two years ago, the group entered negotiations with the city to buy or lease the McKalla lot, which they'd transform into a mixed-use development with six acres of green space, four or five multifamily residential buildings (units affordable and market rate), retail, and a spot for a new rail station, paid for by the developer. Managing partner Neil Francois said in 2016 that the city had appraised the McKalla site at $29 million. By comparison, city staff's more recent report valued the property at $9.6 million. Pool, who attended the meeting, was shocked at the discrepancy, and said she would look into why the two appraisals were so different.

John Chen, a Whitfield-Chen partner, presented a plan for a mixed-use development similar to the Capella proposal, with the northern corner anchored by a grocery store and office space and the rest of the site going toward open space, residential buildings, an education and workforce training center, and studio space for artists.

Reached Tuesday, CM Pio Renteria, whose District 3 was briefly courted as a destination for a new stadium, said he was "very excited" about the proposal and that the venture could be successful in Austin, but expressed skepticism that Capital Metro could afford to move the rail station from Kramer to McKalla (Renteria serves on Cap Metro's board), and he wanted to make sure the city "would not be on the hook" for any infrastructure costs. Also Tuesday, Mayor Steve Adler expressed his support of bringing MLS to Austin, saying he was impressed with the economic activity gains in the city report and that the soccer team would bring "value that transcends economic impact" to Austin. He pointed to the "intangible benefits" the team could have, like bringing residents together from different parts of the city and providing opportunities for the city's youngest players.

But the clock is ticking. PSV says it needs some kind of agreement in place by the end of June if the team is to play here next spring, and Council, mired in CodeNEXT and the budget talks ahead, currently only has two regular meetings on the agenda before its monthlong July break.

This story has been updated to accurately reflect the economic forecast for Travis County. Previously, those figures included the anticipated impact on the city of Austin, as well.