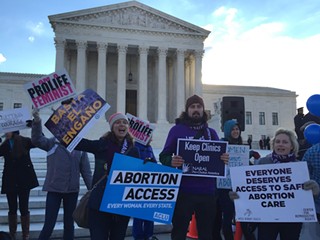 Hundreds of pro-choice and anti-choice activists gathered at the U.S. Supreme Court steps in 2016 (by Mary Tuma)

In a case originating in Texas, the U.S. Supreme Court on Monday ruled the suit over an undocumented minor seeking abortion access is "moot," as she already had the procedure last October. Referred to as "Jane Doe," the teen was blocked from clinic appointments by President Trump's ideological Office of Refugee Resettlement. The ACLU sued and a D.C. appeals court last year ruled in her favor ("Despite State's Opposition, Judge Grants Abortion to Undocumented Minor Held 'Hostage'," Oct. 20, 2017). But in an unusual move, the defeated administration asked SCOTUS to reverse the ruling and reprimand the ACLU for helping Doe access abortion. SCOTUS failed to sanction the ACLU but did toss out that D.C. ruling. Not a full victory for either side, the decision in Azar v. Garza, which didn't resolve the deeper constitutional issues at play and only focused narrowly on the Doe case, doesn't affect a broader class action suit on behalf of all minors. In other words, undocumented minors' right to abortion appears safe for now.

Shortly after the SCOTUS ruling, the D.C. Court of Appeals rejected a Trump administration request to employ its anti-abortion strategies for the minors. The policy is blocked while the case moves forward. "Yet another court has ruled against the Trump administration's 'no-abortion' policy for young immigrant women in federal custody," said Brigitte Amiri, deputy director of the ACLU Reproductive Freedom Project. "Every legal victory ensures that these young people are able to obtain the care they need. We will keep fighting until we secure permanent relief for all the Janes out there." 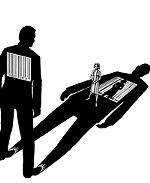