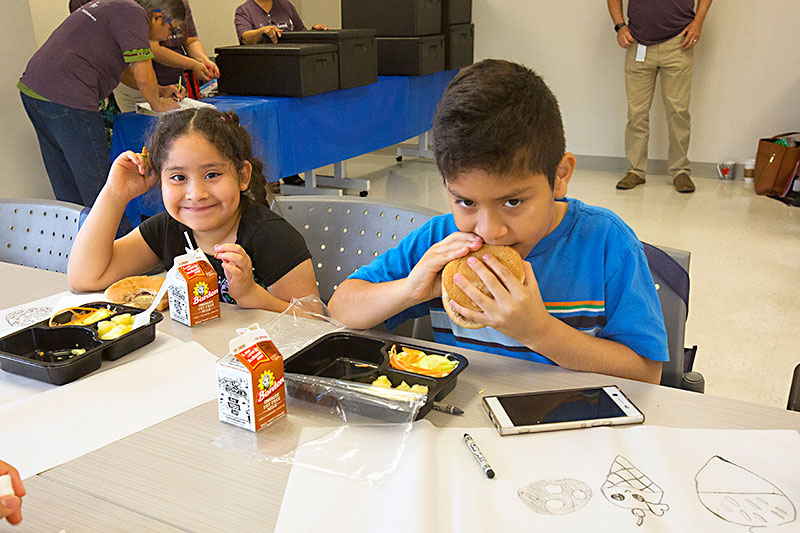 Fátima, 6, and her brother Francisco, 7, enjoy their lunch on Monday. Austin ISD has resumed its annual Summer Food Service Program, serving free breakfast and lunch to local children ages 18 and younger, regardless of economic status and whether the child attends AISD. There are no registration or ID requirements; children or teens simply go to a participating site (more than 40 AISD schools) to receive a meal. For more info, call 211, text FOODTX to 877-877, or visit www.summerfood.org for an interactive site locator map. (Photo by Jana Birchum)

Homestead of the Undead: Among the matters Council expects to address is that recurrent vampire, the property tax homestead exemption, the graduated tax break that escalates in dollar reward according to the value of a residence – meaning a large dollop for Westside homeowners, nothing for renters, and a budget hit in advance of budget prep. Pushed again by Ellen Troxclair, a bump in the HEX will likely be tempting for the rest of the dais. See "Put on Your Hard Hats," June 8.

Courting Columbus, Continued: Mayor Steve Adler declared that the best use of McKalla Place would be to "help facilitate Major League Soccer," a ringing endorsement for the stadium plan following a staff report on the site and counterpart proposal from Precourt Sports Ventures. See "Sudden Death," June 8.

Styrofoam No More: Environment Texas announced that its Wildlife Over Waste campaign had persuaded local sandwich chain ThunderCloud Subs to phase out the use of polystyrene (aka "Styrofoam") by the end of the year. "Plastic pollution is killing our wildlife," said ET director Luke Metzger. "We need other businesses, and the state of Texas, to follow their lead and phase out use of plastic products which are harming wildlife."

Motor Voter Mayhem: The 5th Circuit Court of Appeals has sided with Texas in its appeal to delay a court-ordered fix to its motor voter law, found unconstitutional by U.S. Judge Orlando Garcia. The state need not comply with the 45-day deadline to create online voter registration for drivers while the case moves through the appeals process.

Census Citizen Showdown: The Mexican American Legislative Caucus and the Texas Senate Hispanic Caucus sued the Trump administration over its decision to add a citizenship status question to the 2020 U.S. Census. The groups argue the question is unconstitutional because it will disproportionately undercount minority noncitizens.

While the Texas House moved to implement new sexual harassment policies back in December following numerous reports of misconduct, the Senate dragged its feet. But finally, the upper chamber unveiled new policies late last week that require in-person anti-sexual harassment training for senators and bar senators from being involved in investigating other senators.