Council: Put on Your Hard Hats

City Council, staff get to work 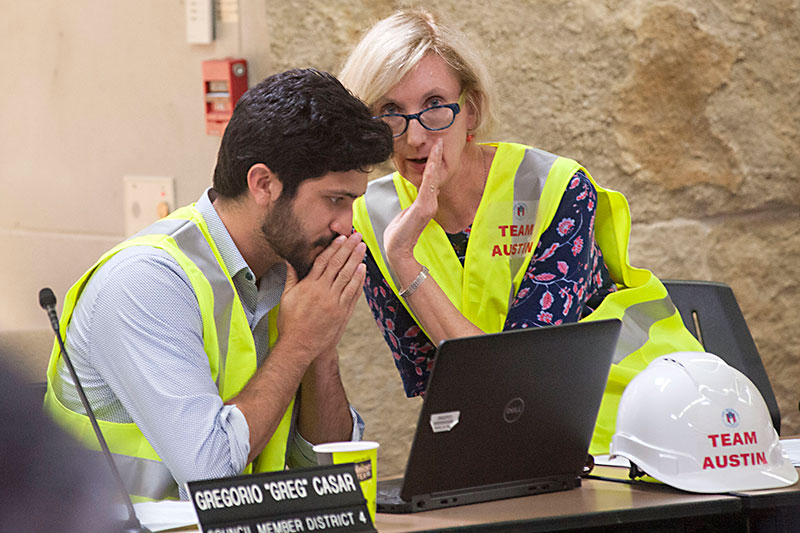 City Council has no regular meeting this week, but its members have been busy. CodeNEXT continues to dominate the conversation around City Hall, and this week is no exception. Members met on Tuesday for a special called meeting, whereupon Mayor Steve Adler handed out hard hats and reflective vests to colleagues and various members of city staff. See Sarah Marloff's "CodeNEXT Comes to Council," below, for more from that affair. Elsewhere ...

Everyone agrees the city needs to do a better job caring for the most vulnerable in our community, but the best way to connect individuals experiencing homelessness to services that help them get back into permanent housing remains up for debate. On Monday, the Public Safety Commission approved a resolution that recommends a closer look at a group of ordinances that the Office of the City Auditor found to essentially criminalize being homeless.

The decision was preceded by a lengthy discussion between commissioners, Austin Police Department personnel, and community advocates. Commissioner Daniela Nuñez sponsored the measure, and introduced it by lamenting the lack of discussion surrounding the ordinances that prohibit aggressive panhandling, camping, and sitting or lying down in certain areas of Downtown – things, Nuñez said, that "we all have to do to survive." APD Assistant Chief Justin Newsom, who previously headed the department's Downtown Area Command, defended APD's enforcement, saying that the alternative (i.e., allowing such activity) would result in tents on Congress Avenue and along the front steps of City Hall. He fears that without an alternative to the current model for the Downtown Austin Community Court, designed to help connect homeless individuals to case managers, removing the current ordinances would create more problems. And he worried that repealing the three ordinances would lead to people being charged with more serious crimes: No Sit/No Lie, which is currently a class C misdemeanor, could quickly turn into criminal trespassing, classified as a class B.

But Newsom said the real problem is that "we have one shelter for a city of 1 million people." Advocates agreed with the nature of that assessment: Increased resources would be necessary to truly reform the system. But they insisted that the measures in question are morally wrong, violate the Eighth Amendment rights of people experiencing homelessness, and don't successfully connect them to permanent housing.

Though the measure passed 8-3, some commissioners struggled with the idea of turning their backs on the business community, whose representatives showed up with horror stories of aggressive panhandling, open prostitution, and drug use. Commissioner Ed Scruggs noted that his wife previously worked on Red River and experienced some of the same problems. Commissioner Sam Holt asked what the city could do to remove the "eyesore" of the Austin Resource Center for the Homeless, which is located in the heart of Downtown due to the services and resources available in the area. Holt wants to see a one-time bond proposal to pay for a bigger facility elsewhere, though experts have said temporary shelter beds aren't the best way to get people into permanent housing.

Though commissioners may affect how the council members who appointed them view the issue, it will ultimately be up to the full Council to decide on which changes, if any, should be made to existing rules. The city is already working on a revised solicitation ordinance, due this month, and City Manager Spencer Cronk announced his intention in May to return to Council in the next six months with a recommendation on the camping and No Sit/No Lie ordinances.

Last week's cover story examined the root causes of the big, leaky mess that is Austin's aquatics system ("Shall We Dive In?," June 1). And on Monday, with summer pool openings underway, the Parks and Recreation Department's acting Director Kimberly McNeeley provided Council with an update on the system's standing.

The news isn't great. While the city's splash pads are (mostly) in operation for the summer, Southeast Austin's Mabel Davis Pool will remain closed for repairs until the middle or end of this month. Aquatics staffers found a "significant crack" in a motor at Patterson Pool just last weekend, and the issue may be so pressing that the entire motor might need to be replaced.

The status of Givens Pool is even more depressing. Despite closing last summer for a $250,000 repair job, the pool continues to leak an estimated 60,000 gallons of water every day, 10,000 more gallons than were getting leaked prior to the expensive repair. McNeeley said PARD's Aquatic team was able to reduce the amount of water loss by "adjusting the water levels in the pool and recapturing some of the leaking water and diverting it back into the system" – enough, she said, to get the pool open this summer – but Givens remains in critical condition moving forward. "Because both bond funding and allocated repair funding from the general fund have been fully utilized or allocated, further deterioration of conditions over the summer could require a pool closure," McNeeley wrote.

One bright spot (if you can call it that) is news that the Aquatic Division has made gains in recruiting and hiring lifeguards, which the city has been working toward for the past couple of years. But those gains don't address the more enduring issue of whether or not those lifeguards will continue to have functioning pools to patrol.

The Definition of Insanity?

Council Member Ellen Troxclair has been on maternity leave since April, but on Tuesday the District 8 rep announced on Facebook that she plans to champion a measure at next week's scheduled meeting that would further increase the city's homestead exemption, from 8% to 10%. Homestead exemptions knock off a percentage of the value of your home when it comes to calculating property taxes, and have been generally sold as a way of maintaining affordability in our current housing crisis.

A large swath of Council, including Adler, Troxclair, Pio Renteria, Ann Kitchen, and Leslie Pool, have previously supported such measures, and some members even campaigned on them, but as my colleague Michael King has pointed out ("Escape From City Hall," July 1, 2016), such a measure would benefit well-to-do homeowners over renters and not even benefit those homeowners as much as they might think. Regardless of equity or efficacy, an increased homestead exemption would blow another hole in the budget, just as Council is sitting down in the next couple of months to make tough decisions about fire stations and health and human services in the next fiscal year.