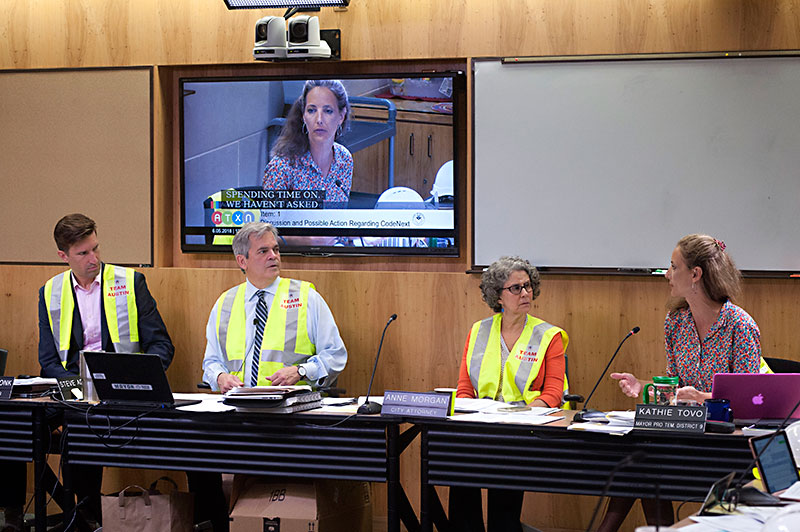 City Council is now knee deep into the land use rewrite. Following Saturday's final public hearing, with over 200 speakers, members reconvened Tuesday for the first of what will be many meetings on the proposed code.

This one was slow, with the morning spent laying ground rules for deliberations. Mayor Steve Adler passed out "team uniforms" (see photo) in an effort to keep growing tensions at bay, and members began their work not by crafting a code but rather a code of conduct to promote a level of respect during the discussions they plan to have.

But the table-setting proved too much for Delia Garza, who, noting how the dais' fault lines have been drawn, asked, "When are we going to start digging into the weeds?" and urged her colleagues to get going lest she skip out on the afternoon session to prepare for an out-of-town conference (which she ultimately did).

Remaining members finally broke into the meat of the matter. Though they only tackled a few issues – among them, if Imagine Austin inspired transportation corridors, whether activity centers should take on the bulk of housing needs, and the virtues of accessory dwelling units – they did find some consensus. CMs agreed that the majority of new housing should be built along corridors rather than within neighborhood cores, and agreed that granny flats should be allowed in all neighborhoods – and in some cases should be easier to build.

Judging by the first week, it’s hard to see a way for the body to cover enough ground for a vote on first reading by month’s end.

Deliberations continue on Tuesday, June 12, during Council's work session, and on Wednesday with another daylong discussion. But judging by the first week, it's hard to see a way for the body to cover enough ground for a vote on first reading by month's end, as they'd originally hoped. Which is unfortunate news for some: At the close of Tuesday's meeting, Jimmy Flannigan said he was ready to start writing amendments now. "I suspect Delia is there too," responded Adler, "but there are still pieces of information I don't have. I'd like to know where consensus is." So expect more of the same next week.

Across City Hall, the Zoning and Platting Commission held their first meeting since staff (temporarily) pulled CodeNEXT from their agenda following their recommendation to "terminate" the rewrite. Commissioner Bruce Evans wondered whether that recommendation represented ZAP's final action on the code, but his colleagues disagreed, saying it was never their intention to wash their hands of the conversation. But confusion was tangible Tuesday, with some still eager to discuss details. Chair Jolene Kiolbassa wrangled the group to start on an alternative route: identifying and fixing the 10 largest problems in today's code.

The meeting closed with members identifying a list of issues they'll address again on June 19. How that discussion will be used remains a mystery, but members do believe Council will still want their input.