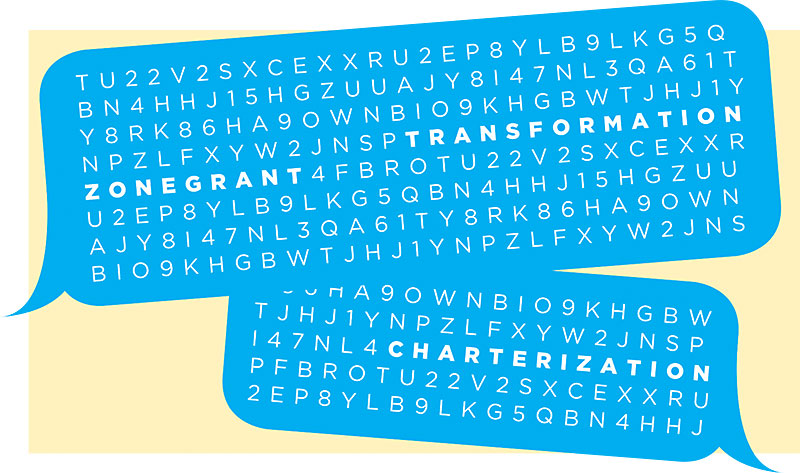 Although the disparaging language in former Austin Independent School District Board of Trustees President Kendall Pace's leaked text messages grabbed headlines, some parents, teachers, and education activists were more alarmed by the actual subject matter in her notes. References to the "Transformation Zone grant," the need for "Betty to run this from the inside," and for "Blaine to be the 'outside schools operator'" have given some in the education community pause over what is happening behind the scenes with the board and the Texas Education Agency.

The Transformation Zone Program is a grant opportunity provided by TEA that would group together low-performing schools into a "transformation zone" that could lead to between $250,000 and $1 million in funding awarded to each campus. The schools would also be given "autonomy over people, time, money, and academic programs," according to the TEA website, that could be used by the campuses to wield greater control over the academic calendar, how curriculum is taught, or how a student's day is structured. The theory is that campus administrators and teachers would be less tied to the generalized strategies prescribed by district officials, allowing for greater liberty to pursue experimental and targeted approaches better suited to a school's specific population.

The prospect of “charterization” went from vague fear to something more concrete when Pace’s texts came to light.

In December, AISD received close to $450,000 for a planning grant meant to identify campuses best suited for the trans­form­a­tion zone. To help design it, TEA paired the district with Empower Schools, an organization that has had success developing similar ventures in Massachusetts and Denver. That work is wrapping up now, and although the final list of schools has not been determined, Superintendent Paul Cruz identified at a January board work session that Pickle, Overton, Norman, Oak Springs, Jordan, and Barrington elementary schools as well as Gus Garcia Young Men's Leadership Academy and Bertha Sadler Means Young Women's Leadership Academy are the area's top candidates. Since then, the application process was opened districtwide, but the "priority" and "focus" schools would be awarded more money if selected. Campus applications are expected before the board on June 11.

One aspect of the transformation zone that has raised eyebrows is the outside board that would be responsible for overseeing it. Jacob Reach, the district official leading the effort to determine each school's "readiness" for the grant, suggested that an independent board would be good for the zone, because it would be "laser-focused" on ensuring success at the schools. TZP skeptics like Ken Zarifis, president of Education Austin, AISD's teacher union, have suggested the outside board could allow for the "charterization" of public schools by opening the door for commercialized education ventures to enter the zone without oversight from the democratically elected board of trustees. It is unclear at this point who would serve on that outside board, or how they would be selected, but Reach said that the board could include seven members, with four community representatives and three appointed by the district. AISD's board of trustees will ultimately set the parameters for the TZP outside board.

The prospect of "charterization" went from vague fear to something more concrete when Pace's texts came to light. For one thing, she specifically said the trans­forma­tion zone should be run "charter-like," but she also dropped two names – Betty and Blaine – that raised flags for some public education advocates. Pace appears to have been referring to Betty Jenkins, a former principal at Austin elementary schools and current district executive, and Blaine Helwig, also a former principal at Austin elementary schools. Together, in 2016, the two founded New 3Rs Education Con­sult­ing LLC, which packages reforms and practices designed by Helwig and Jenkins aimed at turning around schools that have at least 40% of their student population classified as low-income.

Without question, these practices improve student performance on standardized tests. Before Helwig took over as principal at Graham Elementary in 2007, the campus generally earned an "academically acceptable" rating on state standardized tests. But after Helwig arrived and began implementing the New 3Rs methodology, the campus gained and retained an "exemplary" rating, with commendations in the reading and math tests most years, and some years in science and writing. In 2012, Graham become nationally recognized by the U.S. Department of Education as a Blue Ribbon school. That same year, Helwig was awarded the Terrel H. Bell Award for Outstanding Leadership, given to just seven principals across the country.

Helwig brought this success to Graham by implementing the "right systems," providing the "right resources," and staffing the "right personnel," fundamental principles of the New 3Rs program. More colloquially, that translates to highly structured class time that requires adherence to a rigorous schedule; a focus on improving student literacy through, among other tactics, the memorization of the 1,000 most commonly used words in the English language; workbooks targeted at reinforcing knowledge standards set by TEA; and weekly assessments used to track student progress and inform targeted improvement strategies.

But although the approach produces admirable results on state tests, some students, parents, and teachers cast the curriculum model in a more dubious light. In interviews, parents who had children attend schools under Jenkins' leadership described the education atmosphere as like a "boot camp," where some children lost the desire to learn. Teachers recalled how the narrow curriculum standards – "teaching to the test" – prevented them from implementing project-based lesson plans that incorporated real-world problems, which they said had the benefit of engaging students in creative problem solving, in addition to preparing them for state tests.

Gabriel Estrada taught sixth grade at Zavala Elementary in East Austin when Jenkins arrived as assistant principal. Estrada described the kind of work he was encouraged to assign students as focusing on "rote memorization," which "prevented students from thinking critically." He also used a phrase common among opponents of programs like the New 3Rs: "drill and kill," referring to the detrimental effect constantly preparing students for tests can have on their desire to learn. "Simply put, it kills the drive and passion that a kid will gain for learning" in public schools, Estrada said. (Estrada retired from AISD in 2012 after 19 years at Zavala, and is now employed at Austin Voices, one of the groups Pace criticized in her texts.)

Zachary Sessa, a 2017 graduate from LASA High School, related his experience as a fifth grader at Becker Elementary during Jenkins' first year as principal there. Sessa said his fourth-grade class emphasized projects and experiences such as reading personal essays at the independent Resistencia Bookstore. But as Jenkins began implementing the New 3Rs, Sessa said he felt like he was being "programmed" into a "test-taking robot," through daily spelling quizzes, group vocabulary exams, and a focus on math, reading, and science (the three subject areas elementary students are tested on by TEA). "I saw in myself, and in some of my peers, the mental trauma that constant drilling for test prep can have," Sessa said. "School was just no longer fun."