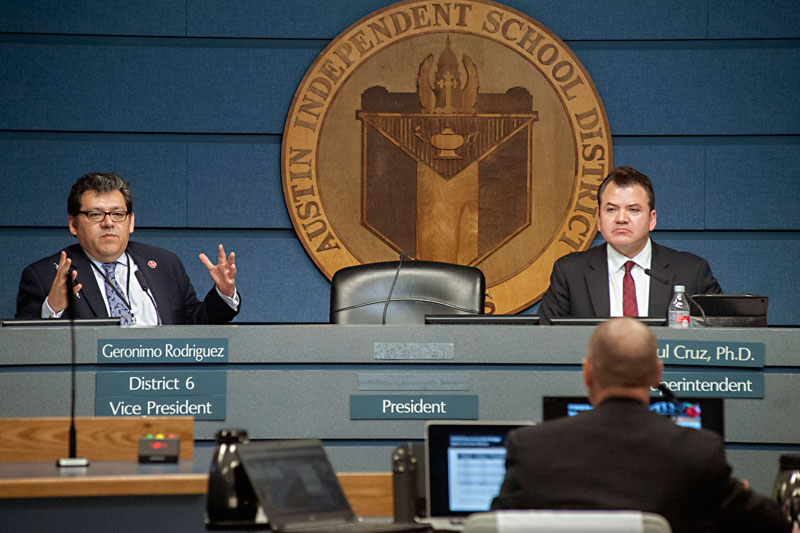 An empty seat and nameless placard marks the first meeting of the AISD Board of Trustees following Kendall Pace's resignation as at-large member and board president. The board voted for Vice President Geronimo Rodriguez to succeed her. For more, see "The School Board Shuffle." (Photo by John Anderson)

City Council meets today, Thursday, May 24, for a relatively manageable agenda, and plans to address temporary fire stations, the Waller Creek Tax Increment Financing plan, and the petition to put CodeNEXT on the ballot, among other items. See "Council: What Do We Want? Money!," May 25.

On to November: Run-off elections were Tuesday. Among the victors, Lupe Valdez took the Democratic nomination for governor. For more congressional, state House, and judicial coverage, see "Run-off Election Results," May 25.

Kendall Pace resigned from the Austin Independent School District's Board of Trustees Monday, and also vacated her post as president. The board elected VP Geronimo Rodriguez to succeed Pace in that position. See "The School Board Shuffle," May 25.

The Planning Commission held another marathon meeting Tuesday night in its ongoing effort to finalize CodeNEXT recommendations for City Council. Commissioners met for a fifth time in the afternoon, following a third and final public hearing. They'll convene again on both Thursday and Friday.

Feedback Sorely Needed: City Manager Spencer Cronk extended the timeline for taking feedback on the prospect of appointing Brian Manley permanent chief of Austin Police through Thursday, May 31. That and more on the hiring process in "A Solitary Manley," May 25.

A Little Progress: Following reports of sexual misconduct and little oversight at the state Capitol, outgoing House Speaker Joe Straus has put together a working group to craft more recommendations to prevent harassment. Austin Rep. Donna Howard heads the group as a co-chair.

Officers No Billed: District Attorney Margaret Moore declined to prosecute Austin police officers Kevin Bittner and Dustin Turner for their role in the officer-involved shooting of Kyle Garcia. Garcia, who was wounded during a shootout with police in March, faces charges of aggravated assault with a deadly weapon and aggravated assault against a peace officer.