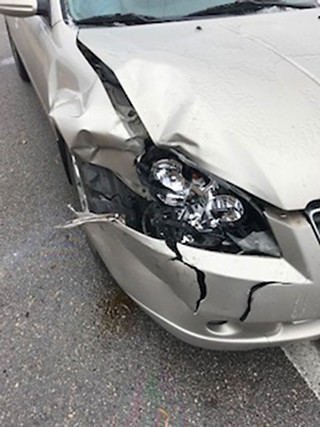 The crash on the Slaughter Lane over­pass that killed Eva Marie Gonzales during an ice storm on Jan. 16 wasn't the only notable accident to occur on that particular stretch of road that day. Shortly before 9am, departmental records note, Austin-Travis County Emergency Medical Services Chief of Staff Jasper Brown was parked on the South Austin overpass and in the process of getting out of his city-owned Ford Explorer to respond to another accident when he looked into his rearview mirror and saw a beige Nissan Altima barreling toward him over the crest of the bridge. 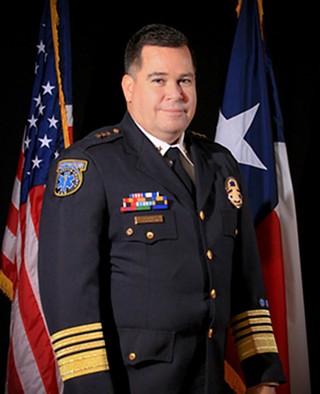 ATCEMS Chief of Staff Jasper Brown (Courtesy of The City of Austin)
Medics believe an executive staffer received disparate treatment specifically because of his rank and role.

The Altima's driver lost control on the icy roadway and rammed into the rear driver's side of Brown's Explorer, causing a softball's size of damage to the bumper underneath the Explorer's hatchback door. First responders from each of the city's three public safety departments arrived at the scene, as did a tow truck, which took the Altima away. Neither Brown nor the Altima's driver were found to have been in pain, and responding officers cleared the scene without treating anyone for injuries.

What Brown did immediately after leaving the scene is not exactly clear, but what is clear – because the city could not provide any public record suggesting otherwise – is that the chief of staff did not submit to a post-collision drug and alcohol test, as members of the rank and file believe he should have done. ATCEMS policy notes that any employee involved in a collision must submit to drug and alcohol testing if the accident results in a fatality or an injury that must be treated away from the scene of the accident, or if any of the involved vehicles is towed from the scene. That's what happened with the Altima, and yet Brown did not submit to any testing.

Brown didn't respond to requests for comment on that detail, but Assistant City Manager Rey Arellano did. He acknowledged that Brown did not take a drug or alcohol test, and said he spoke with ATCEMS Chief Ernie Rodriguez and determined in part that while "a strict reading" of departmental policy "would require drug and alcohol testing," management's review of the incident "considered the fact that the driver of the vehicle that had to be towed lost control of his vehicle under icy conditions and impacted Chief Brown's parked vehicle." (Indeed, a Safety Review Summary Report, filed by crash investigator ATCEMS Lt. Mike von Wupperfeld, regarded the accident as "Damage to City Property." Divi­sion Chief Eric Jakubauskas ultimately decided Brown did not need to submit for testing.)

Arellano said the intent of the policy is to determine whether the involved employee was under the influence of drugs and alcohol "while operating" their vehicle. "Chief Brown had stopped to render aid at the scene of an accident and was not operating his vehicle at the time of the incident," he wrote. "There were no other factors revealed during the investigation that resulted in a reasonable suspicion that Chief Brown was under the influence of a drug or alcohol." He suggested that the incident indicates "a need to review and consider revision" of the rule "to better clarify its intent."

Should a review occur, it'll take place concurrently to another policy review currently being considered by ATCEMS: that of the department's approach toward addressing workplace harassment by members of the executive staff ("Something Rotten at EMS," March 9), spurred by Rodri­guez's decision to let former Assistant Chief James Hawley retire to avoid administrative discipline following an Austin Police Department Internal Affairs investigation into two separate incidents of verbal and physical harassment against female medics. In cases like that one, Chief Rodriguez holds final say over investigations and ensuing discipline, something that according to Arellano's response may hold true with drug and alcohol testing following on-the-job collisions.

Months later, that's what has certain members of the rank and file upset: that an executive staffer received disparate treatment specifically because of his rank and role. Medics pointed to an incident on Dec. 31, 2017, in which a driver lost control of their vehicle and rammed into an ambulance that had been idle at a stoplight. Both vehicles were towed, they said, and the medics went on medical leave. Still, departmental policy required they get an alcohol and drug test, which they reportedly did.

Moreover, medics question the foundation of Arellano's assessment that the intent of the policy is to determine whether the employee was under the influence of drugs and alcohol while operating their vehicle. That's a separate policy, they note: "Reason­able Suspicion Drug Testing." Post-collision testing, they say, is conducted as a protection to the city and employee in case of litigation following the collision. A city spokesperson noted that "all the City's policies exist first and foremost to ensure the safety and health of our employees and the community," and suggested there could be some confusion with the word "intent," between "what a policy is 'intended to do' ... and the 'intent for why it exists.'"

But perhaps that's another detail that Arellano and the department will have to clarify when they conduct their eventual review. 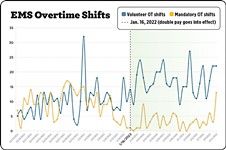 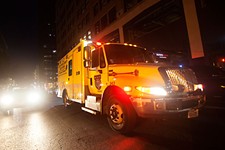