Filtering through the final round 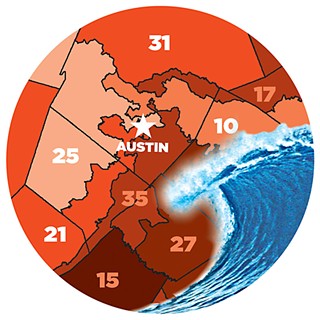 There are eight races relevant to Travis County voters in this month's Democratic primary run-off: the seven listed here, plus Texas House District 46, which Mary Tuma previewed in depth last week ("The Prize Fight," May 4). That tally includes four of the six congressional districts that cross into Travis County, plus two state House districts. But even if you don't live in one of those districts there's still good reason to hit the polls: Every Democrat in Travis County can vote for both governor and judge in the newly created 459th District Court.

Travis County congressional districts up for grabs in this month’s Democratic primary run-off include CDs 10, 21, 25, and 31. There’s also a run-off in CD 27, the seat until recently held by Rep. Blake Farenthold, but that district does not stretch into Travis County. The nomination for CD 17 was won by Rick Kennedy in March. Incumbent Rep. Lloyd Doggett went uncontested in CD 35.