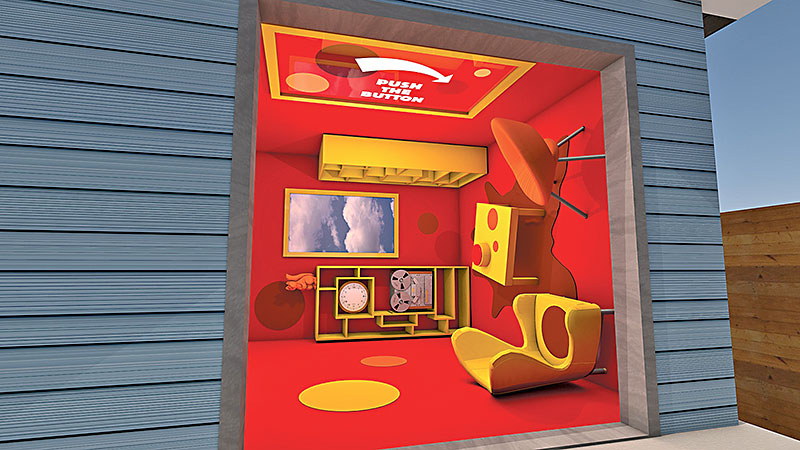 Courtesy of Museum of Human Achievement MoHA claims to have designed an anti-gravity room to promote Maltesers candies, among other activations, and passed their renderings (shown above) to Collide and Mars Wrigley Confectionery. The collective says they and their colleagues were fired from the project, and were later shocked to see their exact renderings still brought to life. (Courtesy of Kaya Halil Sümer)

The Museum of Human Achievement is a lot of things, according to director Zac Traeger, but it's not a marketing agency. Traeger founded the nonprofit seven years ago in an Eastside warehouse with the decidedly anti-capitalist mission of cultivating arts and culture by providing affordable studio space to artists. But when Mars Wrigley Confectionery came knocking last October, hoping Traeger and his colleagues would play Willy Wonka for them and design an immersive marketing exhibit for Maltesers at South By Southwest, he couldn't resist.

"We're usually standoffish," said Traeger. "But the idea of candy was really attractive, and they were seemingly asking us to be ourselves and give them our wildest ideas."

MoHA agreed to work on the project, and gave Mars a blueprint to turn three Rainey Street bars into a confectionery wonderland, including an anti-gravity room for Maltesers, a living greenhouse for the green M&M, and a room filled with squawking brass instruments for the yellow M&M. The higher-ups at Mars loved it, and the self-proclaimed "culture agency" Collide, which Mars hired to stage their presence at SXSW, brought it to life. The only problem was, Traeger and the artists who designed the exhibits were "fired" by Col­lide, which hired other artists and builders to fabricate MoHA's designs. Traeger said, "When we couldn't reach an agreement regarding labor costs Collide told us, 'What you've provided is worthless. It's of no value.'"

Traeger and the artists who actually designed the exhibits claim they were “fired” by Collide, which hired other artists and builders to fabricate MoHA’s designs.

After months of round-the-clock work, this was a bitter pill to swallow. From last October through February, Traeger involved over 20 artists in the project, he said. His main partner was local lighting and production designer Natalie George, who has experience working on corporate activations. "As soon as I came on board ... it was kind of nonstop," she said. The project originally focused on Maltesers, and over the next few months Mars added the house for the M&Ms and another for Twix (which Collide did not use). George and Traeger had conference calls every week with Collide and Mars' outside marketing firm, Integer. But George said that as the project grew, they were told by Collide not to talk about budgeting with Integer. "I have a producer's brain," she said. "And I was like, 'We should be having a reality check with Integer,' but we never got to have that conversation."

Mocking up designs without a contract or an advance isn't uncommon in this line of work, according to George, who said it's always hard to get brands to pay upfront for pop-ups and activations, due to various unknown variables. Ultimately, a lot of work is done on "spec," she said.

But artists have to eat, which is ostensibly where Collide comes in. Alan Miller, who owns the company, sees himself as a broker between artists with ideas and corporations with money. "Our goal is to always work with local artists and local creators, because those are our partners; those are who we want to support," he said.

Miller, who lives in Los Angeles, has an indirect connection to Austin through Bridget Dunlap, who pioneered the Rainey Street bar scene. Dunlap bought a few houses on Rainey back when it was still residential and turned them into Clive, Container Bar, and Lustre Pearl, among others. Miller said he helped Dunlap make Rainey Street a popular destination by renting out her bars during SXSW in the early days of the street's transformation. Now, he's a limited investor in Lustre Pearl East. Through this connection to Dunlap, Miller's company has put on activations for SXSW on Rainey before. Last year, they worked with Showtime to re-create the Double R Diner from Twin Peaks, at which Kyle MacLachlan handed out free cherry pies.

Despite this pedigree, Collide didn't find success working with MoHA. George and Traeger requested a written contract and budget for the project in December, according to George, but Collide refused to provide either. Meanwhile, MoHA continued to communicate with Integer, integrating the firm's requests into their designs. When Collide finally sent MoHA a budget in January, it was not enough to construct the designs MoHA had come up with to satisfy Integer, according to Traeger. He informed Collide that their budget was too low, and Collide suggested MoHA pay its artists less, Traeger said.

At this point, MoHA artists had done 338 hours of work on the project, according to Traeger, without receiving pay or a signed contract from Collide. The artists asked for a progress payment and a contract from Collide, refusing to continue work on the project until they agreed to pay. Two weeks later, the company doled out a $25,000 progress payment.

Still without a contract at the end of January, Traeger and George revised the scope of the project to comply with Collide's budgetary concerns, and sent a new contract along to Collide. In response, Collide informed MoHA that it was no longer planning to work with them to bring the designs MoHA had come up with to life. Collide asked MoHA to send back all but $5,000 of the progress payment, and suggested that they would continue to use MoHA's designs, according to Traeger. Upon hearing this, Traeger contacted Integer to tell them that Collide was planning to fire MoHA while continuing to use their designs. Traeger said that when Collide found out, they threatened to sue MoHA and asked that they return the final $5,000 Collide paid out, because MoHA "failed to deliver any useful materials in support of the Project."

Without a contract, MoHA had no legal recourse to recover anything from Collide or Mars. But when SXSW rolled around, they saw pictures of the Maltesers and M&Ms exhibits they had designed all over Instagram.

"That was the moment that changed everything for us," George said. "When literally every single one of our ideas was brought to life, down to the exact clock we designed to sit on a shelf, we decided it was time to stop being softhearted artists and lawyer up like businessmen."

It didn't take Traeger and George long to figure out who Collide had hired to execute MoHA's renderings. Traeger reached out to one of these individuals, Edward Ayoub, and asked if he knew the plans belonged to MoHA. Ayoub said Collide told the artists it hired that Collide owned the designs. He said he checked the renderings Collide provided and found that the company had pasted a solid-color patch over MoHA's logo. Armed with this information, Traeger and George hired a lawyer to take Collide to court. MoHA is now seeking compensation for intellectual property theft from Mars, Collide, and Integer for two of the three houses they designed. "I really don't like feeling vengeful," Traeger said. "I'm not doing this for the money. ... I'm trying to stick up for future artists."

Responding to MoHA's lawsuit on May 8, Collide claims that the designs do not belong to MoHA, due to the fact that they were created in collaboration with Integer. "Integer created and developed the significant, material elements of the renderings of the referenced rooms and directed MoHA to include those elements through detailed renderings and specific written and oral instructions," the company wrote. Collide also denies MoHA's claims that it asked for a contract on multiple occasions and that MoHA wasn't paid for its work. Traeger responded: "Yes, they provided feedback and ideas, but the artwork and designs were all created by us, and subsequently used by them to build the installations."

The one thing every party involved does agree on is that interest in this type of marketing is growing. Collide is already working with brands to plan activations for SXSW 2019, according to Miller. And this case likely won't be decided until late next spring, according to MoHA's lawyer, Buck McKinney. (Collide is being represented by Pete Kennedy, who is the Chronicle's attorney, and also represents SXSW.) As for MoHA, it's back to square one: "Would we ever do something like this again?" Traeger asked rhetorically. "I don't know." Taking corporate marketing dollars to sponsor their activities in Austin may be more trouble than it's worth. "We're looking into rural partners," Traeger said. "We're popping up in Lockhart" in May. 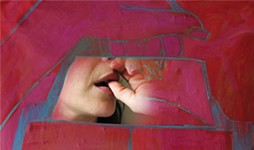