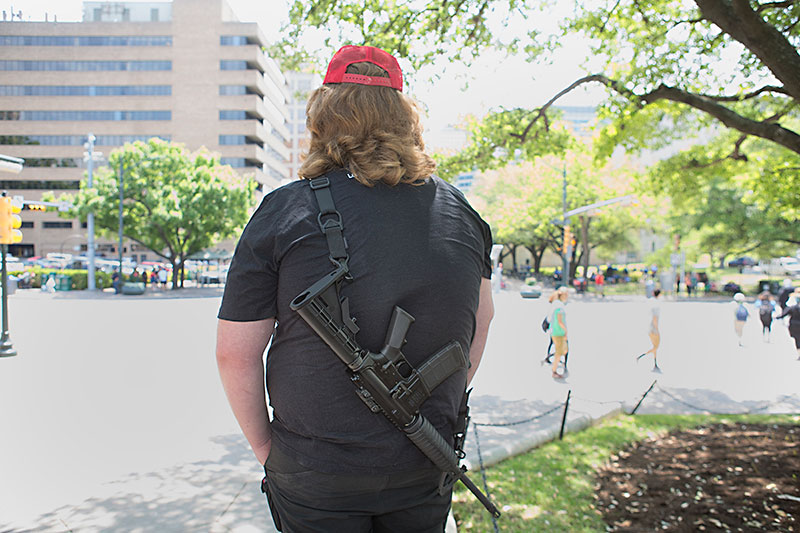 A gun rights enthusiast stands outside of the Capitol grounds awaiting the arrival of high school students who marched last Friday for gun safety in their schools. (Photo by Jana Birchum)

One Police officer is dead and a security guard and second officer are in critical condition after theft suspect Armando Luis Juarez opened fire at a Home Depot in North Dallas.

Too Close to Call? A Quinnipiac poll shows Beto O'Rourke three points behind incumbent Republican Ted Cruz in the race for U.S. Senate, 47-44. "Once expected to 'cruise' to re-election, the incumbent is in a tight race," said Peter Brown, assistant director of the poll.

Meanwhile, Sen. Cruz and his senior colleague John Cornyn are in Dallas Friday fronting for the NRA Leadership forum.

Speaking of the NRA, they're feuding with Yeti over the cooler company's decision to "eliminat[e] a group of outdated discount programs," including one for NRA members. The NRA responded by charging that Yeti has declined to "continue helping America's young people enjoy outdoor recreational activities," which seems melodramatic. NRA enthusiasts have spent the week destroying their Yeti products.

Death Watch The 5th Circuit Court of Appeals denied Erick Davila's request to file a petition for relief, and the state's Board of Pardons and Paroles voted to not recommend commutation. Unless the Supreme Court rules otherwise, Davila hits the gurney as this issue goes to press.