Council: I Get Around

On Birds, byways, and bridges 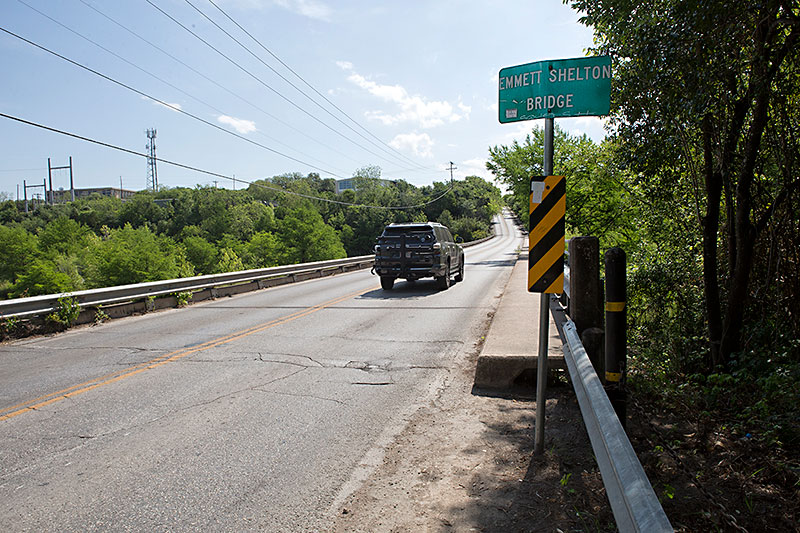 The Emmett Shelton Bridge on Redbud Trail, one of five local bridges that could use a bit of work (Photo by Jana Birchum)

Amid our own municipal affair with electric scooters, it's easy to forget that a dusting of cities across the country are also playing host to their own fleets of dockless disrupters. San Francisco, which got its scooters last month, recently ordered its upstart companies – Bird, LimeBike, and Spin – to halt activity until they each address a multitude of complaints about helmet violations and scooters obstructing sidewalks. The companies have until next week to get into compliance. Scooters operating in the city must now be permitted, following action taken by the San Francisco Board of Supervisors on April 17.

Austin is getting to that. On Thursday, City Council will consider an ordinance to modify city code to account for the invaders on two wheels. The changes will make it so that permitted scooters are legal in the city right of way – generally defined as any city-owned highway, bridge, alley, or sidewalk. Council got an update at its Tuesday work session, and several members bemoaned that the process for regulating dockless mobility – including bikes and scooters and whatever else these entrepreneurs can monetize – had to now be rushed because Bird and LimeBike wouldn't play by the rules.

“I want to not have to boycott your companies.” – Kathie Tovo

Mayor Pro Tem Kathie Tovo, who ran the meeting in Mayor Steve Adler's absence, recalled her initial experience with the scooters and expressed personal disappointment in how the two companies had entered into the Austin market. "I want to not have to boycott your companies," she said. "So please, bring them into compliance." She said her constituents have reported people scooting down the hike and bike trails, which is prohibited.

Ora Houston sparred with Transportation Director Robert Spillar about community outreach over the concern that Eastside residents won't have access to the technology. He's assured her that he'll contact the merchants organizations she had suggested. That process is ongoing, Spillar said, but the department wanted to promptly return to Council with the suggested code change because it represented a "weakness in our current ordinance that prevents us from fully managing the current situation." Hous­ton wasn't satisfied with that explanation; she said she had directed staff to contact, for example, the Manor Road Mer­chants Association, but that group hadn't received a call. "I can't give more direction than that about who to reach out to," she said, adding that Spillar "gave 166 people you reached out to, but it wasn't the one I asked you to do." Spillar vowed to "correct" the situation. "To rush it this quickly and not get the input of the community is a mistake," Houston concluded. Moving several pegs down the transit mode popularity scale, Council's Mobility Committee heard an update last week on the Cor­ri­dor Construction Program and how it relates to Capital Metro's long-range transit plan, known as Project Connect. Corri­dor Program Director Mike Trimble assured members that the office has so far worked closely with CapMetro to make sure that the remade corridors are equipped with high-capacity transit.

Council considers Item 28 at today's meeting, April 26, that'll ratify the implementation proposal that staff has been working on for the better part of a year ("There's the Corridor," Feb. 23). With $1.4 billion in need but only $482 million in bond money, it took effort on the part of 30 staffers to figure out what should receive priority. But that plan hasn't been met with universal praise. Public safety advocate Jay Blazek Cross­ley testified that he and his cohorts (particularly Vision Zero ATX colleague Nic Moe) believe the city has mistakenly prioritized lengthy projects rather than quick fixes that could provide immediate community benefit. Because the gap between current funding and anticipated need is go great, Crossley contends that the city should use existing funds to have as much direct impact on people's lives as possible. Staff responded that it took that feedback into account but also didn't believe there to be any error in their methodology.

Council will rule on that today. Crossley said, "The right way to fix it would be to correct the error, and to change the matrix to not have a bias toward project length."

A Bridge to Fix

Following the bridge collapse that killed six people at Florida International Uni­ver­sity in March, Council received an update from staff on the conditions of our bridges. And the news is pretty good: Two years ago, the Texas Department of Transport­a­tion rated 90% of Austin's bridges to be in "good," "very good," or "excellent" condition. Just 46 of the 388 bridges analyzed ranked in "satisfactory" or "fair."

But while these bridges remain in overall decent shape, some of the ones that TxDOT ranked as "good" still need "immediate rehabilitation" to keep travelers safe: in particular, the William Cannon and Slaugh­ter Lane overpasses over the Union Pacific Rail Road. Public Works recommends the city take a proactive approach to those and three other projects: the Emmett Shelton bridge over Lady Bird Lake, on Redbud Trail; Barton Springs Road over Barton Creek; and Delwau Lane over Boggy Creek. The 2018 bond Council is currently considering recommends $54 million in bridge funding, which would go toward fixing those bridges, starting with Emmett Shelton.

Beyond that, the city will need to continue to invest if it hopes to maintain the quality of its bridges. Staff anticipates needing at least $2 million in additional funding for pedestrian bridges, low water crossings, retaining walls, and safety barriers every year for five years.