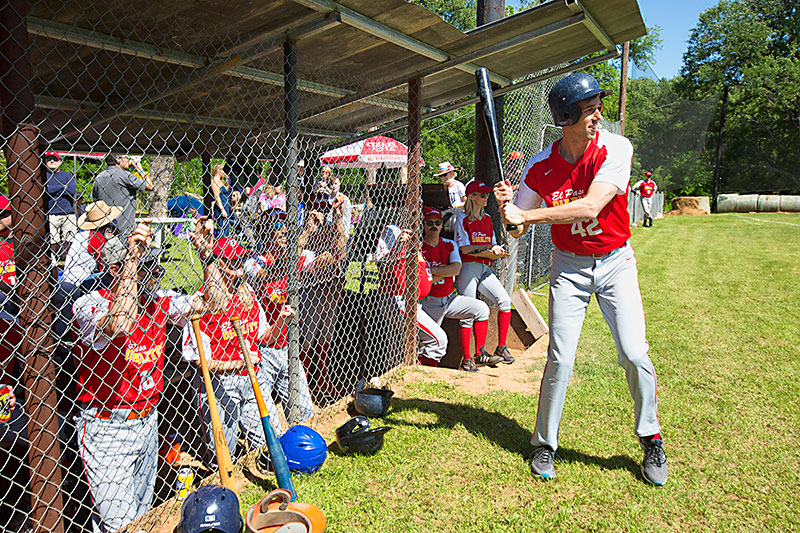 Put me (into the U.S. Senate), coach! Beto O'Rourke takes a few practice cuts before an at-bat at Saturday's "Barnstorming With Beto" fundraiser baseball game between the Texas Playboys and Los Diablitos de El Paso. (Photo by Jana Birchum)

No City Council meeting this week. The next regularly scheduled meeting is next Thu., April 26. But there's a lot happening at City Hall and its environs. See "At War on Two Wheels," Apr. 20.

Voter registration deadline for the May 22 run-off election is on Monday, April 23. Visit www.votetravis.com for regsitration info.

To Debate or Not Debate? Democratic run-off candidate for governor Andrew White is pressuring opponent Lupe Valdez to participate in a televised debate. A debate would likely help White, who finished a distant second to Valdez in the March primary, and Valdez has already suffered a few verbal missteps. Valdez has yet to accept the proposal.

A GOP Snub: The Texas Republican Party has once again denied the Log Cabin Republicans a booth at their state convention, as the state GOP has since the late Nineties, despite the state's general growing acceptance of the LGBTQ community. The Texas GOP Convention is its 150th, and scheduled for June 14-16 at the convention center in San Antonio. We aren't saying it should be glitter bombed, but we also aren't saying it shouldn't.

President Don Trump has nominated David S. Morales to fill a federal judge vacancy. The Austin attorney and former state deputy attorney general likely curried favor with the prez in 2010 when he failed to push for an investigation into Trump University. While the state could have collected $5.4 million in legal fees for 500 Texans who were hoodwinked, Morales helped clamp that down.

CASA of Travis County is looking to expand its services to support abused and neglected children ages 2 and up, but to do so they need 300 new volunteers. The organization currently serves youth beginning at age 5. Apply to volunteer at www.casatravis.org/volunteer.

It isn't Yogurt, but Alex Jones is getting sued again – this time by the parents of three Sandy Hook victims, who believe the conspiracy theorist engaged in defamation when he (repeatedly) theorized that the Sandy Hook massacre was a hoax. Here's hoping they take Jones for everything he has.

Former First Lady Barbara Bush passed away in Houston on Tuesday. She was 92. Bush and George H.W. were married for 73 years. She's one of two American women who could say both her husband and son were president.