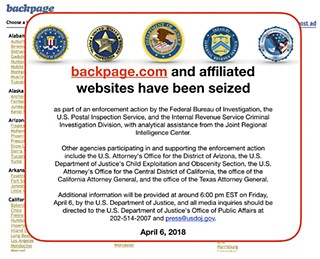 If you search for the long-running classified advertising site Backpage.com now, all you'll get is a disclaimer from the federal government informing you the site has been seized in partnership with various agencies including the Texas Attorney General's Office, the U.S. Department of Justice, and the FBI.

The shutdown, which occurred on Friday, April 13, comes after a 2017 U.S. Senate investigation found Backpage.com, which historically included adult-oriented ads, knowingly facilitated child sex trafficking, and concealed the evidence through various measures including deleting words in ads like "teenage" and "school girl," to mask the criminality and maintain their financial interests. The editing "did nothing to change the fact the ad featured the prostitution of a child – it only created a veneer of deniability and helped Backpage's customers (i.e., pimps trafficking children) evade detection," the indictment reads. Federal prosecutors charged the Dallas-based site's founders with facilitating prostitution, conspiracy, and money laundering (think foreign banks and cryptocurrency). CEO Carl Ferrer pleaded guilty to human trafficking and money laundering in Texas, as well as in California. He'll be sentenced to up to five years in prison once he's fulfilled the terms of his plea agreement with the Texas A.G.

However, executives Michael Lacey and Jim Larkin, along with other employees, have pleaded not guilty. Phoenix New Times co-founders Lacey and Larkin ran the alternative weekly chain Village Voice Media and created Backpage.com in 2004 to compete with Craigslist, a threat to print advertising. Ferrer joined the team and they eventually sold off their papers, including LA Weekly and New York's Village Voice, but kept the highly lucrative Backpage – last year, the site was valued at $500 million and operated in nearly 100 countries. (Despite its alt-weekly roots, don't get the now defunct site confused with the Chronicle print edition's literal back page, dubbed "The Back Page," a Classifieds section that first began running in 1994. The Chronicle never partnered with Backpage.com.)

While Texas A.G. Ken Paxton and advocates against sex trafficking have claimed the shutdown as a victory, many sex workers are seeing Backpage.com's demise as an end to safeguards that helped them screen and vet their clients. Without it, they'll be pushed back on the streets, a much more dangerous landscape. Legislation signed by President Donald Trump last week further aims to crack down on sites that promote prostitution, additionally complicating the lives of sex workers. The Fight Online Sex Trafficking Act (FOSTA) reduces legal protections for hosting sites and grants state attorneys and survivors the ability to take legal action against the sites. "For adults working in the sex trade, shutting down these websites drives them out of the spaces keeping them safe and into street-based sex work, putting them at greater risk of violence," wrote Madison Forker with advocacy group Collective Action for Safe Spaces. "Shutting down safe spaces for sex workers will not cure sex trafficking. This misconception has already put sex workers' lives and safety in jeopardy, and will continue to do so until minds are changed."