Soccer in Austin: The Road to Realness 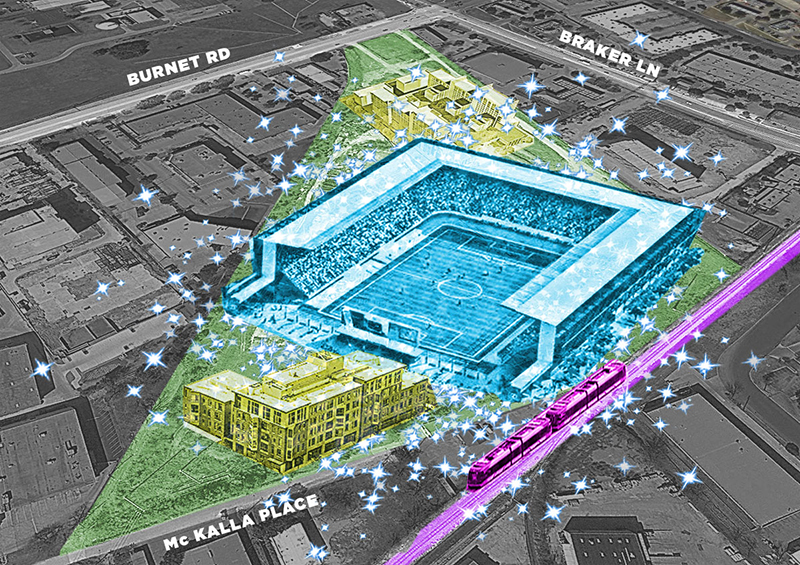 Thanks to City Council's approval of a resolution directing the city manager to complete a "community engagement process" and detailed analysis of McKalla Place as a possible site for a stadium for the potentially incoming Columbus Crew, soccer fans in Austin are now one step closer to having their own top-shelf American soccer team to support. Spencer Cronk's report is due by June 1, and should (among other things) take a closer look at the community benefits outlined in a preliminary four-page proposal by Precourt Sports Ventures (which owns the Crew), including the possibility of incorporating affordable housing into the site's development plan, potential improvements to transportation infrastructure – such as a new MetroRail stop – and an analysis of the number of Austin residents who visit nearby cities to watch Major League Soccer. Assuming Cronk doesn't come back with a bleak opportunity cost analysis that would cause Council to turn a double take, both parties are confident they'll reach a preliminary deal.

PSV has made clear its desire to set up at this city-owned tract in North Austin that for decades played host to a chemical processing plant. (Environmental testing will need to happen.) The group is working with the Los Angeles-based sports office of the Gensler architecture firm, whose credentials include work with the L.A. Dodgers, Cleveland Browns, Texas A&M, and Texas Tech. Gensler is currently drawing up renderings for what's projected to be a 20,000-seat stadium to occupy 10 of the site's 26 acres, with additional on-site features to include parking, perhaps a mixed-use development, perhaps some affordable housing, and perhaps also some ... well, nothing's for certain quite yet. Here’s a mock-up of the McKalla site, with a totally theoretical development program added onto it to scale – including parking for over 1,000 cars, plus a couple of blocks of commercial development which, in this same footprint, could be anything from a dining/shopping complex, to full-scale mixed use, with floors of residence above retail.
The following elements are placed, to scale:
A: San Jose’s Avaya Stadium, an 18,000-capacity structure, finished in 2015, which Crew officials cited as a design they liked;
B: A 500-car garage, copied from the Hyde Park Baptist Church garage at 40th & Speedway;
C: Two blocks of The Domain development a few block north. The specific buildings shown here are four-story residential buildings, with seven levels of parking garage in the rear (the white part) – but as noted above, the same footprint could instead represent a dining/retail complex – with a lot of overflow parking.

The vague nature of what else will get kicked into the mix points to the relative lack of clarity concerning what everybody's currently talking about when they talk about Major League Soccer in Austin. (Gens­ler hasn't yet decided which direction the stadium will face so as to best keep fans from baking in the summer sun, and we're not even sure what we'd call the team.) But the reality of a working stadium in North Austin remains two to three years away. Precourt and MLS need to know by June whether a move to Austin is feasible; if that happens, MLS soccer begins in earnest here next March. The organization has already identified several locations around town that could serve as a temporary field, including the Lewis-Chen Family Field at St. Edward's University or a number of Austin Independent School District sites (where a prohibition on alcohol sales could prove troublesome), but the ideal option remains the Mike A. Myers Stadium at UT, which holds the same number of fans as the proposed stadium at McKalla, is centrally located, and can serve beer. UT Athletic Director Chris Del Conte told the Statesman last week that he had not yet been approached by PSV and wasn't exactly sold on the idea. "There's added value to the community" if the team were to play at UT for a few years, he told the daily, "but there's no added value to the University of Texas. That's wear and tear" on the field.

Outside of the stadium site itself, the big question is how fans will get to games. The McKalla site is nestled into a block of land surrounded by Burnet, Braker, Metric, and Rutland Drive, with narrow access directly onto Burnet, and PSV will need to run a traffic impact analysis and work with business owners in the area to sort out how cars will get in and out. Speaking with the Chronicle last week, local politico David Butts (contracted to handle outreach for PSV here in Austin) also floated the idea that fans could park at the Domain and walk the roughly two miles to the stadium – a big ask during the summer – or get there via shuttle, should PSV form some kind of park-and-ride partnership with that arcology.

There's also public transportation, and Council Member Leslie Pool, whose district houses McKalla, announced quickly after it was identified as PSV's ultimate choice that she plans to push Precourt to pay for a new MetroRail station that would drop off at the stadium. (The nearest active station, the Kramer Station, is half a mile away.) At present, Cap Metro appears to be on board with that plan. In a December 2016 study, consulting firm AECOM estimated the cost of building a new station at $13.1 million, and Cap Metro officials recently stood by that figure, noting however that "the real costs of serving a station with transit are the ongoing operational and maintenance costs in contrast to the initial capital costs."

Butts and fellow consultant Mark Littlefield said Precourt is open to working with Cap Metro on a new station, but that they hoped the construction project could be achieved for significantly less than the 2016 estimate. Beyond the MetroRail, the two also mentioned the potential for additional stops on the 803 MetroRapid bus and new pedestrian or bike paths, calling the stadium "an opportunity to hit the reset button" on transit in the area.

A version of this article appeared in print on April 6, 2018 with the headline: Pitch Definition