The Jumpolin Story Goes to Court

That's the only certain conclusion to be drawn from the competing narratives surrounding the latest Status Labs legal actions, in which the former ownership partners, still yoked together by their original partnership agreements, are facing off in state district court. According to the party of the first part – Jordan French – his former partners have broken their contract, defrauded him, and misappropriated funds to their benefit and to the detriment of the company. According to the party of the second part – Darius Fisher, along with Jesse Boskoff – their former partner (French) nearly destroyed the company with irresponsible and reckless decisions, had to be expelled, and is now attempting a sort of legal coup d'état by suing the company he jointly founded.

Fisher and Boskoff had to return about $140,000 to company accounts to avoid incarceration.

If those names sound familiar to Aus­tin­ites, it's because they recall the February 2015 demolition of the Jumpolin piñata shop, a small Eastside business that suddenly became a metonymy for gentrification, inequalities of wealth and power, and the displacement of Latino residents by Anglo-driven development. Without rehashing the entire episode, its essential elements were these: A real estate company related to public relations-plus firm Status Labs, bought the property upon which the Jumpolin business (owned by Monica and Sergio Lejarazu) was a tenant, and after some delay (and a permit issued by the city) demolished the building with little or no notice. Public outcry was immediate and intense, and though the Lejarazus have since re-established their business farther east (thanks in part to a settlement of their lawsuit against the landowners), their story has caused continuing conflict over successor businesses on the property, and persists as an emblem of local injustice. ("Jordan French Out at Status Labs," March 26, 2015.)

That's an abbreviated version, and includes several still-disputed elements. The continuing fallout now includes a lawsuit filed by French early last year, counterclaims against French by Fisher and Bos­koff, and (barring a potential settlement) the prospect of a full trial in July. Excerpts of the myriad pleadings in the case give the flavor of the competing accusations. Accord­ing to French and his lawyers, "Fisher and Boskoff are using their positions as managers of [Status Labs] to wrongfully dissipate, misapply and waste the company's assets, for their own personal unjust enrichment, and such actions are illegal, oppressive and fraudulent." According to Fisher and Bos­koff and their lawyers, French "breached his fiduciary duty to Fisher and Boskoff by his mismanagement of the company, his intentional dishonest acts, and his violation of the noncompetition provision of the Operating Agreement."

As recently as March 2, Judge Lee Yeakel cited Fisher and Boskoff with contempt for violating his previous order not to pay themselves in excess of $14,000 each, monthly; they were allowed a recess during the hearing, during which they had to return about $140,000 to company accounts to avoid immediate incarceration.

Essentially (although even the precise allegations are themselves in dispute), each side accuses the other of various forms of breach of contract, fraud, and theft (i.e., misappropriation of company funds to their own enrichment). Those accusations and counter-accusations are but the tip of a very considerable iceberg of charges flying between the three men, who remain tied together by that same "Operating Agree­ment" that each side is accused of violating. The agreement itself left no certain way of breaking the partnership (another cause of mutual blame), so that while French "resigned" as CEO in the immediate wake of the Jumpolin debacle, he has sued as a "member" of the company management who can't simply be voted out by his fellows. In their pleadings, Fisher and Boskoff say they would prefer to dissolve the company (literally First Page Management, doing business as StatusLabs.com) to be quit of their relationship with French, while French says he is hoping for a settlement in the coming weeks that would presumably allow him to go on his way.

Curiously, the Jumpolin episode continues to reverberate throughout the lawsuit and its bitter disputes. Initially, French not only accepted responsibility for the decision to demolish the building, he described the Lejarazus to a Culture Map reporter as criminals and akin to "roaches" who needed to be removed. (French now says, "I didn't make those remarks attributed to me.")

French recently told the Chronicle that while as an owner, he certainly bore major responsibility for the demolition, the decision was in the works for months, and "everybody in the company" was aware of it, including Fisher and Boskoff. He has provided to the court a text message, purportedly from former controller Jeff Love to Darius Fisher, in which Love writes, "I am going to knock down the piñata store. Are you sure you want to do this [?]" to which Fisher apparently responds, "Ha ha ha." (Love has testified in deposition on French's behalf.)

The provenance of the text messages remains unconfirmed, and Fisher told the court that he doesn't recognize the messages and denies writing the response. Fisher also says that in fact, French and Love personally drove the acquisition of the Jumpo­lin site (through a separate company, F&F Real Estate Ventures), and that the other partners (as well as the Status Labs staff) were blindsided by the abruptness of the demolition and especially by French's subsequent inflammatory public comments.

At the time, Status employees issued an "open letter" to Austinites, laying the blame on French and apologizing to the community, saying they would do whatever necessary to rebuild trust. French says he believes that Fisher wrote the letter in an effort to place all blame for the demolition and its fallout on French. Two spokespeople for current employees – "Director of Culture" Clair Rogers and "Senior PR Strategist" Lacy Jansson – insist that the letter was employee-written and sincere, that they and others have remained with the company because they believe in its work and support current management (Fisher and Boskoff), and that French's charges and lawsuit are groundless.

Whether all this will be aired out in open court remains uncertain – and there are wheels within wheels of additional allegations that may or may not surface publicly. But for a firm whose work rests on "public relations" and "reputation management," it is certainly an ironical fate that years after the Jumpolin demolition, it remains a central company project to attempt to restore and manage its own reputation, and to re-establish relations with its community that might somehow, eventually, remove the ugly stain of its first impression. 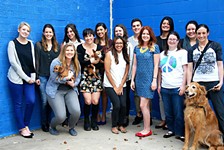