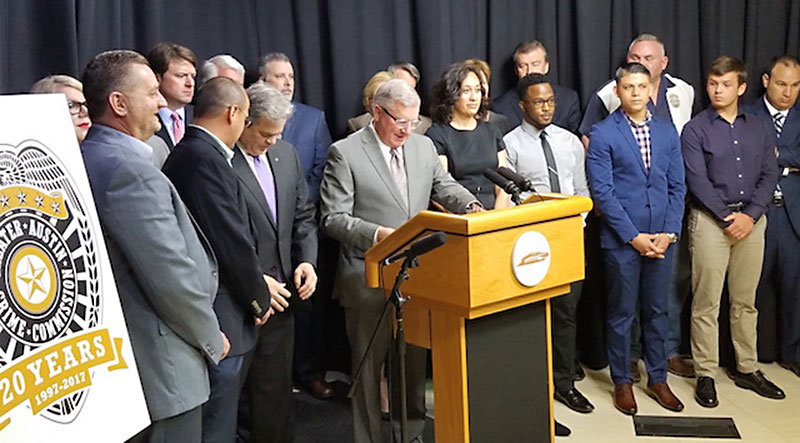 Last Thursday's City Council meeting was not the longest on record. It only seemed like it, especially in the morning, when the dais spent a couple of enervating hours debating how best to express their intention to hire more police officers. All in all, it was one of those "We Love APD" sort of days ....

The macho-sentimental atmosphere actually preceded the regular meeting, when Mayor Steve Adler and other council members (Delia Garza, Ann Kitchen, Kathie Tovo) joined the morning press conference held by the Greater Austin Crime Commission, in order to support that day's Item 47 and to thank interim Police Chief Brian Manley and his officers for bringing an end to the manhunt for the Austin serial bomber the previous morning. Horrifying as the entire bombing episode was, the timing couldn't have been better for the "public safety first" advocates of the GACC, with its Gotham City moniker, self-"commissioned" 20 years ago by a group of bold-faced, big-shot names – Bill Cunningham, Elizabeth Christian, Pete Winstead, Bobby Ray Inman, et al. – devoted to "supporting law enforcement and championing crime prevention."

Current GACC President David Roche (of the Endeavor Real Estate Group) began by endorsing Manley as "the right person to lead this [Austin Police] Department," then declared the group's support for Item 47 on the day's Council agenda. That Item was (by common acknowledgment) a largely symbolic resolution recommending a "strategic hiring plan," and the funding of 12 previously approved officer hires that haven't yet been budgeted, but it was also a trigger for the larger GACC argument that APD is "300 officers short" (in Roche's words) of full-strength, with the related consequence that officers have too little time for the "community policing" (public outreach) recommended by the usual experts.

Adler spoke at length, also describing Manley as a "strong candidate" and thanking those particular officers who, in confronting the bomber the previous morning, "ran into danger to keep us safe." Adler blamed the lack of a current APD staffing plan on the collapse of meet-and-confer contract negotiations with the Austin Police Association (not quite mentioning that he and his colleagues had rejected a negotiated contract). Other council members reiterated their intention for more police hiring, summed up in Garza's remark that Austin is "no longer a small college town – we are a big city," and need to act accordingly.

Nevertheless, Garza added that she has been a strong advocate of the social service programs that are often left begging at budget time, and insisted, "We can do both ...."

Once the meeting commenced – following the requisite singing of "Happy Birthday" to the mayor – the encomiums for Manley resumed, as did the dais debate over Item 47. No one really opposed it, per se – but several were worried that it simply reiterated existing policy (something that Garza and Leslie Pool, off the dais this day, had argued on the Coun­cil's message board), or that it jumped the gun on official budget deliberations (set to begin April 4). So there were various tweaks and "whereas"es added to the mix, before the resolution was finally approved, after a couple of hours and occasional digressions to either question Manley on the staffing details or praise him again for his chiefliness – to which he responded with slightly embarrassed deference.

Selecting a police chief, of course, is a task legally belonging to City Manager Spencer Cronk – Council may only confirm or veto his recommendation. Whether the just-hired Cronk has accumulated sufficient political capital to resist the current blue wave, and instead of immediately anointing Manley embarking on another national, lengthy open search, remains an unanswered question (see "Beside the Point: All Eyes on Him," March 30).

Not mentioned on the dais, but not lost on some observers, was that three of Item 47's sponsors – Kitchen, Ora Hous­ton, and Ellen Troxclair – are commencing re-election campaigns, as is Mayor Adler. And in passing, a couple of times, the mayor noted that a recent uptick in violent crimes was largely driven by increased reporting of domestic violence – a fact that might argue for more social workers than police officers, or at least a different model of policing than more "boots on the ground ...."

Since there were another 98 bottles of agenda on the wall, quite a few more things got done.

• Hot for HOT: The often contentious matter of Hotel Occupancy Tax allocations (tied to the debate over proposed Convention Cen­ter expansion) was aired out in the evening, with some adjustment to plans for spending on historic preservation sites.

• Courting Rosewood: After years of debate, an upgrade and preservation plan for Rosewood Courts public housing was approved – described as a "compromise" between strict preservation and extensive renovation to modern living standards – with many residents on hand to applaud.

• Fútbol Incoming? In the final vote of the day – just past midnight, on Adler's actual birthday – Council approved further review of the potential of McKalla Place as a venue for Major League Soccer.

The next regularly scheduled Council meeting is April 12, with a work session on the 10th. The official budget forecast meeting is on Wednesday, April 4.