At an event held early last week after competitor Fasten skidded out of the market, RideAustin CEO Andy Tryba introduced himself as the "idiot who thought it was a good idea to start a nonprofit rideshare." While it's undoubtedly been a huge undertaking for Tryba and the RideAustin team to establish the nonprofit, they've also established themselves as the last rideshare option standing among the surge of companies that tried to compete for market share after Uber and Lyft's brief departure in 2016. Some, like GetMe and Tride, failed to ever gain traction; others, like Fasten and the even more short-lived Fare, put up a fight before eventually calling it quits.

One driver at the event spoke to why RideAustin has developed such a close relationship with drivers: The nonprofit treats them with dignity, he said, and pays more to them per ride. While Fasten's exit barely fazed him, of RideAustin the driver said: "These guys need to survive." Speaking to those drivers, Tryba celebrated 2.5 million rides completed and $330,000 donated to local charities through those rides. RideAustin saw a 25% increase in its ride volume on the day after Fasten shuttered, and a 40-60% increase in app downloads. Tryba said the nonprofit's challenge moving forward will be to combat the "habit" people get into while traveling outside of Austin to use Uber or Lyft. He stressed the importance of being out in full force during South by Southwest.

Tryba poked a little bit of fun at Fasten when he highlighted RideAustin's local roots. "Fasten kind of positioned themselves as local even though they were from Russia," he said to laughs. He noted how his nonprofit will continue to make changes. RideAustin just implemented a referrals program to help drivers grow their clientele, and new-rider promos. In response to a driver's question, he confirmed that he'd like to expand the service to other cities, perhaps even this year. 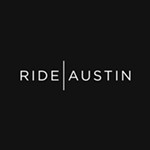