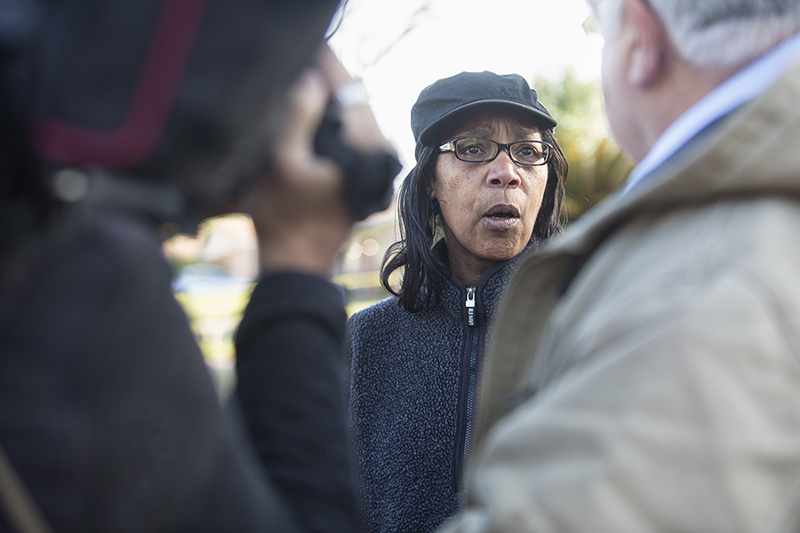 Cynthia Burdett discusses her experience when a package bomb went off at her neighbor's home. (Photo by Jana Birchum)

Austin Police were still investigating the source of the exploding package that killed Anthony House out front of his Harris Ridge home in Northeast Austin on March 2 when a second package exploded shortly after 6am on Monday morning at a house on Oldfort Hill Drive, 12 miles to Harris Ridge's south. The mysterious package was structured similarly – unmarked and left out front – and when it detonated, it killed 17-year-old Draylen Mason, who opened it, and injured his mother, standing nearby. Mason's grandmother was also at the home during the detonation but was unharmed. A neighbor reported that the blast was so strong that it blew a window out next door.

The FBI and Bureau of Alcohol, Tobac­co, Firearms and Explosives joined APD at Oldfort Hill, and before long Homicide detectives and FBI agents were canvassing the area. APD evacuated close neighbors as a bomb squad cleared a second package (which proved non-suspicious) from the neighborhood. Neighbor Mark Woodard told me he was not home at the time of the detonation, but that his mother and sister were, and they heard what they described as a door slamming shut before they were both escorted to a Cap Metro bus for evacuation. Another neighbor, Cynthia Burdett, appeared visibly shaken as she told reporters she first thought the sound was her own heater exploding. The next thing she knew, "I saw my neighbor on a stretcher." She described the Mason family as being active in their church.

There was no longer any doubt that the bombings were related.

Police had been reluctant to classify House's death as anything in particular – and in fact at one point questioned whether House made the bomb himself – but at a press briefing shortly after Mason's death on Monday, interim Police Chief Brian Manley said detectives were now investigating House's death as a homicide, and that "similarities" in the two incidents made clear that a connection should be pursued. Neither package came through any licensed delivery service, leading investigators to believe they were being dropped off overnight. Manley said officials have asked neighbors for any surveillance video that may have recorded the package being placed. "We want the community to be aware that this has happened, and obviously there is the possibility that these are related," he said. "So if you find any suspicious packages on your front porch, at your residence, do not handle them, but instead call 911 and let us come out and take a look at those packages and ensure that they are safe."

Not an hour had passed after the warning that word of another explosion – this time on Galindo Street in Southeast Austin – came in to APD. Agents rushed across the river to a home where 75-year-old Esperanza Herrera had found a third exploding package on her doorstep and picked it up to bring into her home. (She never actually opened it.) Paramedics rushed Herrera to a nearby hospital, where she was reported in critical but stable condition.

Though two of the three households targeted were African-American and the other Latino, Manley told reporters during a subsequent brief that investigators wouldn't yet classify the bombings as hate crimes and couldn't establish a defined motive. "We are not ruling anything out at this point, because when you rule something out you limit the focus of the investigation and you might miss something," he said.

But there was no longer any doubt the bombings were related. The participating agencies will form a task force to investigate the case. The FBI sent its San Antonio and Dallas Evidence Response Teams, and the ATF dispatched its National Response Team. While assuring the public that the task force would "leave no stone unturned," Manley warned that the investigation could be a lengthy one. He reiterated that the city should be vigilant about any suspicious packages: "These devices can explode in many ways, either by being moved or by being opened. If you see something that's out of place: Do not handle it, do not move it, do not touch it. Call us."

With eyes already on the city for South by Southwest, the story caught the attention of national media. Manley said that while visitors should be as vigilant as any resident, it doesn't appear the Festival is a target. And he declined to get into details about the construction of the bombs, or characterize the perpetrator as a serial bomber. But what he did say was rather grim: "What we do know is we have an individual who has the ability to construct these bombs and to have them successfully detonate and cause serious injury and loss of life."

As the task force continues its investigation, the city mourns the loss of a 17-year-old full of promise. Mason attended East Austin College Prep, was active in his church, and dreamed of becoming a surgeon. He also played the double bass for the Austin Youth Orchestra. Former City Coun­cil Member Mike Martinez posted a photo of himself with Mason in 2013, when Mason won the Hispanic Bar Association's essay contest with an insightful piece on racial profiling. "We must put a stop to this," Martinez wrote. "RIP Draylen."