Many balls in play for the Columbus Crew Ohio Attorney General Mike DeWine and the city of Columbus filed a lawsuit on Monday against Columbus Crew SC, owner Anthony Precourt's Precourt Sports Ven­tures, and Major League Soccer in an effort to keep the team from relocating to Austin. The lawsuit cites a state code revised in 1996 after the Cleveland Browns announced plans to move to Baltimore – and which ultimately resulted in Cleveland retaining the Browns' records and intellectual property while Art Modell turned his team into the Ravens. The code, DeWine wrote, "applies to owners whose teams use tax-supported facilities and accept financial assistance from the state and its localities" and requires teams to provide at least six months' notice of their intention to relocate, and to allow the city or other local parties an opportunity to purchase the team.

The lawsuit marks yet another wrinkle in a long unfolding saga. Here in Austin, City Council remains reluctant to commit to the usage of any city-owned land until Precourt provides more detail about the "community benefits" of relocating the team to Austin. Last week Precourt announced an internal analysis that estimated the soccer club could bring "community benefits in excess of $400 million in the club's first 25 years." (He declined to elaborate to the Statesman on how those benefits would be achieved, or what they might look like.) Precourt also noted that PSV was exploring the purchase of "a select list of privately held parcels," without specifying any area. So for now, especially after the Parks and Recreation Board's unanimous vote last week against placing a stadium at Roy G. Guerrero Colo­rado River Park, most of the speculation has centered around a site on McKalla Place, near the Domain.

On Friday, however, Parks and Recrea­tion Board Vice Chair Richard DePalma wondered aloud about a future for another site that has received little public attention: that of a former wastewater treatment plant at 911 Linger Lane, just south of Bolm District Park in East Austin. The Govalle Waste­wat­er Treat­ment Plant is still owned by Austin Water, but was decommissioned in 2006. The plant has since been given "semi-commissioned" status and converted into a training facility for city staff via a partnership between AW and the Austin Fire Department. The water utility said "typical training includes safety certification, water and wastewater licensure training and other technical and leadership development." 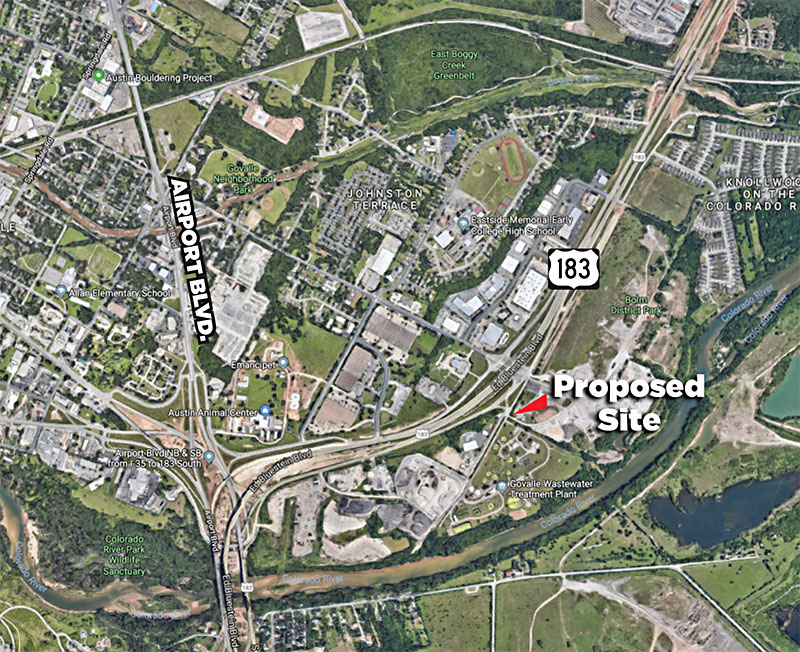 The site is positioned between two of the locations (Bolm and Guerrero) that made the list of potential sites the Parks and Recreation Department sent through to Council, but it was not included on the list itself. On Monday, PARD Act­ing Director Kimberly McNeeley said that once she discovered the site was being used as a training facility, she moved on to other options, though it remains unclear why the staff housed at Govalle could not be moved to another location. Another challenge McNeeley noted was the privately owned concrete plant next to Govalle; the city or PSV would need to buy that property to make effective use of the site for a stadium.

DePalma broadly outlined his vision of soccer at Govalle by highlighting some potential long-term projects that could be undertaken by the city, or ideally, in a joint effort with Precourt, to flesh out the area. Because the site is located on the river, it could be used as a way for the city to push aquatic traffic, which currently concentrates further east in the central parts of the river. With Bolm and the John Trevino Jr. Metro Park both nearby, a trail could be built, unifying them with the new development. Finally, and perhaps most fantastically, DePalma speculated that the MetroRail Red Line could be extended from Plaza Saltillo to drop off near the stadium. The viability of DePalma's dreamed-up projects will remain unknown unless the city or PSV agrees to take a closer look at the cost and effort involved.

Where the soccer venture goes from here remains unclear, and it is also unclear how the new legal entanglement might impact PSV's ability to continue the due diligence required to move the Crew to Austin. Precourt and Major League Soccer issued a statement Tuesday night citing disappointment in the new lawsuit, saying it "chooses to ignore both the facts and the law.

"Since acquiring the right to operate the Club in 2013, PSV has made significant investments both on and off the field to try and make Crew SC a viable enterprise in Columbus. Despite these efforts and the on-field success of the Club, Crew SC has been at or near the bottom in the League with respect to box office results and corporate support."

And so they will continue to try to find that form of success somewhere else.

A version of this article appeared in print on March 9, 2018 with the headline: Many Balls in Play