More news from the campaign trail 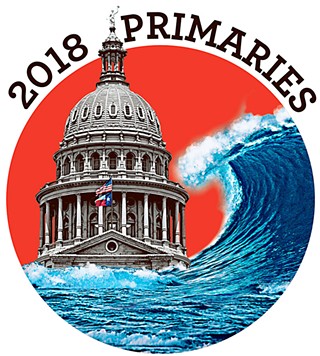 The CD 21 Dem fight – aka "Let's Beat Kopser" – continues, with Elliott McFadden again blasting foe Joseph Kopser's board membership of the Texas Association of Busi­ness. "On women's health, Joseph Kopser's TAB was to the right of Greg Abbott," McFad­den said in a press release. "When you help lead an organization that 'opposes all new health care mandates,' I think you have to question what kind of champion Kopser will be for women's health." Meanwhile, Kopser released a new digital ad: "Democrat Joseph Kopser is running for Congress because access to affordable, quality health care is worth fighting for. Joseph's all in on strengthening and protecting Obamacare and fighting back against Republicans who want to defund Planned Parenthood. He will always vote to protect women's access to health care and right to choose." –M.K.

The Texas AFT union reports that in an online poll of mostly teachers and other school employees, with more than 1,800 respondents, GOP voters favored Scott Milder by 91-7% over incumbent Dan Patrick in the primary race for lieutenant governor. Many respondents commented, "Anyone but Dan." –M.K.

Text-based campaigning is standard fare in modern politics, but one Chronicle mom – who lives in Baltimore – was surprised to see a message seeking support from Travis County Dem chair candidate Dyana Limon-Mer­ca­do. "Do you know this candidate? <3 Mom," she wrote, forwarding the message. –C.H.