Light fare on the agenda this week 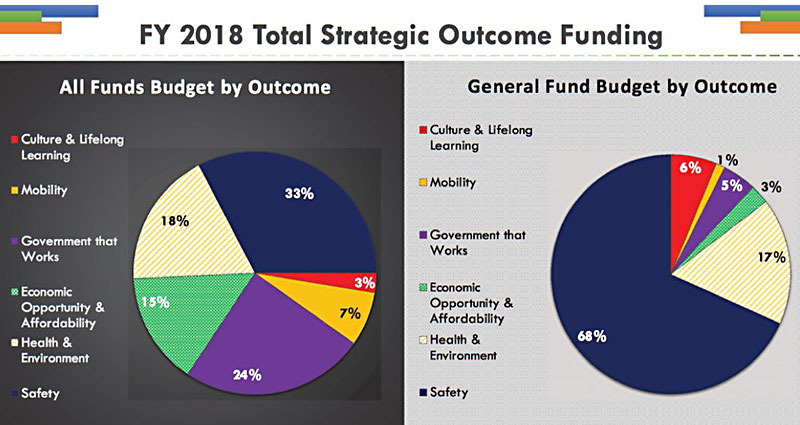 The FY 18 "All Funds" and "General Funds" budgets, allocated by the City Council's six "strategic outcomes." The All Funds budget ($3.9 billion) includes the enterprise (income-generating) departments; the General Fund budget constitutes about 25% of All Funds, or $1 billion.

Although you never know until the bars close, today's City Council meeting shouldn't be quite the marathon of Feb. 15, when the paid sick leave ordinance hearing featured several hours of public testimony, well beyond midnight. As it happens, paid sick leave is on the menu again (Item 17), though it's unlikely to merit an extended hearing. As a follow-up to its action mandating paid sick leave for employees of private companies, council members propose to confirm earlier directives extending the same benefit to the city's own part-time and temporary staffers, pursuant to budget decisions made last fiscal year ("Sick Leave Passes," Feb. 23).

It's unlikely to be as controversial on the dais, but there was an extended discussion at Tuesday's work session, initiated by Alison Alter, over the potential cost. That was a bit confusing, as her colleagues pointed out: There's already money earmarked in the FY 18 budget for the move (about $200,000, which might not all be needed), and the new ordinance wouldn't even go into effect until Oct. 1 (i.e., FY 19). But Alter wanted confirmation that no Parks and Recreation programs would be cut (most of the affected are apparently PARD employees), and the co-sponsors were happy to make those assurances.

Overall, it's a relatively light agenda, with few Items that jump out as potential flashpoints. One is Item 15 – a five-year contract for "community technology access lab management services" – which was postponed last meeting after witnesses for local nonprofit Austin Free-Net objected to their proposed replacement by San Francisco-based nonprofit Community Technology Network. Council wanted more time to review the contract, the staff recommendation, and the arguments – which might resume on the dais (see "Is the City Dumping ...?," Feb. 23).

Or perhaps the local anti-fluoride contingent will notice Item 12, a million-dollar, five-year contract for fluorosilicic acid, to continue the city's longtime water fluoridation program. They haven't been heard from in a while – and some of their standard-bearers have been bogged down in other business – but this Pencco contract might shake the bushes.

Other than that, another Champion Tract (1C) is up for rezoning, with split recommendations from staff (approval) and the Zoning and Platting Commission (denial). The applicant and neighbors are mediating, and a postponement seems likely.

Meanwhile, last week Council kicked off its budget year, earlier than ever before, with a plan for a redesign (to be fully unveiled at the April 4 budget forecast) and a brace of snappy slogans, like "outcome-based budgeting," "strategic outcome planning," and – a popular refrain at last week's budget work session: "buckets not vendors." All of these notions are ways of summarizing Council's latest effort to reimagine its budget decisions, under a six-pack of "strategic outcomes."

The grand categories, developed by Council strategy sessions and under which each department has been asked to categorize their appropriations, are: Health and Environ­ment; Safety; Culture and Lifelong Learning; Economic Opportunity and Affordability; Mobility; and Government That Works. Staff told Council that roughly 70% of the budget could be readily allocated by those outcomes, with the other 30% less certain: "It's not an exact science."

There are overlaps and some surprises (e.g., a few Austin Police Department activities, like Pipe and Drum Corps, have "cultural" aspects). But in theory, it will allow budgeting council members to be thinking about broad priorities more than specific expenditures ("buckets not vendors"), and thereby not be handcuffed to last-minute wish lists (aka the "concept menu") that became a sort of shell game of "a little for column A, a little for column B ...."

We'll see. Discussing the early draft preview, staff and CMs seemed energized by the prospect – three years in the 10-1 budget barrel have taken their toll – and budget chief Ed Van Eenoo told Council, "The exciting stuff will happen April 4, when we do the forecast, the priority setting, and getting into the budget process."