CodeNEXT’s End Is Near, in Theory

What fate for our five-year, $8.5 million rewrite? 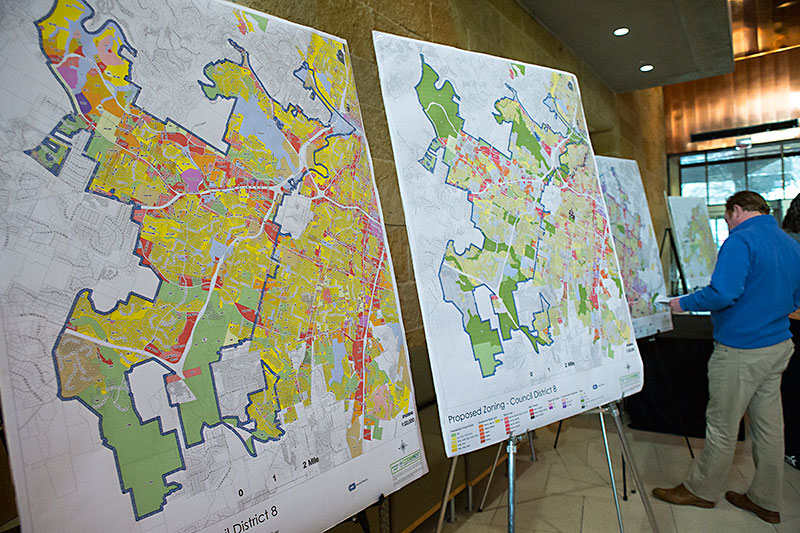 Make sense of these new maps. (Photo by Jana Birchum)

CodeNEXT has failed to gain much support within the community, and that continues with draft three.

Neighborhood preser­va­tion­ists and East Austin residents claim it upzones central neighborhoods, incentivizing demolition of single-family homes in lieu of larger multi-units. On Feb. 20, Community Not Com­mod­ity called the latest draft, released Feb. 15, an "elaborate scheme to rezone the entire city and redevelop much of East and Central Austin," fueling gentrification, displacing "lower-income people," and hiking property values throughout the city.

So both sides fear the same result. Moderate thinkers may view this as an indication that CodeNEXT alone can't solve the city's problems. But the new code should still try – and the Neighborhood Housing and Community Development Department believes it does, with expanded density bonus programs placed by zones, not geographic locations. Code writers have touted two changes to housing density and upzoning, placing much of the new development along centers and corridors such as Lamar, Burnet, and South First – and out of neighborhoods. (Urbanists remember how draft two zoned the bulk of Austin's core R3C, which would have allowed three or more units on most lots. Draft three has all but removed R3.) The bulk of these centers will be rezoned from commercial to mixed-use. Under the expanded density bonus program, developers would automatically opt into a DBP should they build mixed-use properties along these hubs.

Within neighborhoods, draft three will make it easier for homeowners to build accessory dwelling units to create more missing-middle units. To incentivize the preservation of existing homes, ADUs will be allowed on properties with homes that are 10 years or older without being limited by the lot's floor-to-area ratio cap if the original house is left intact.

Yet preservationists remain concerned that R3C has been removed in name only. The latest map has zoned most of the city's core R2C, which would allow a duplex or single-family home with an ADU to be built on a 5,000-square-foot lot. But Zoning and Platting Commission Chair Jolene Kiol­bas­sa says that if the lot is 7,000 square feet, four units could be built on it. The fear is that such allowances will continue to drive infill developers into neighborhoods.

Frustration also stems from never-before-seen text in draft three. While the two land use commissions were awaiting its release, Planning Commission Chair Stephen Oliver often expressed expectations that the final draft would be a cleaned up and polished version of draft two. That has not been the case, however, and on Tuesday Oliver noted how some sections of the code have been fully rewritten. This "makes the burden of reviewing" draft three more difficult. Oliver recognizes rewriting "was bound to happen." There was "no way someone wasn't going to try and write something better ... especially after receiving criticism that draft two wasn't good enough."

Over at ZAP, Kiolbassa, who's grown wearier with each release, has finally had it with CodeNEXT. "They still haven't gotten it right, so now it's time to end everyone's misery and start again." She's not alone: Community Not Commodity has also stated that "CodeNEXT is fundamentally flawed," and has requested Council table the rewrite in favor of a "better" approach. Whether that will happen remains an open question. (As does what a "better" approach would look like.) Asked if she expects Council to approve the proposed code, Kiolbassa shook her head, saying "I just don't know."

Oliver will remain on task; deciphering the latest draft and map, identifying how much of the proposed code works and which sections need to be redone before drafting recommendations to Council. His end goal is modest: adopt a system that's better than our existing code. "Obviously, it will have flaws," he conceded. "That's part of a successful adoption process, not a failed code. So let's make sure the flaws are not fatal, and when we turn it on, the system actually operates."