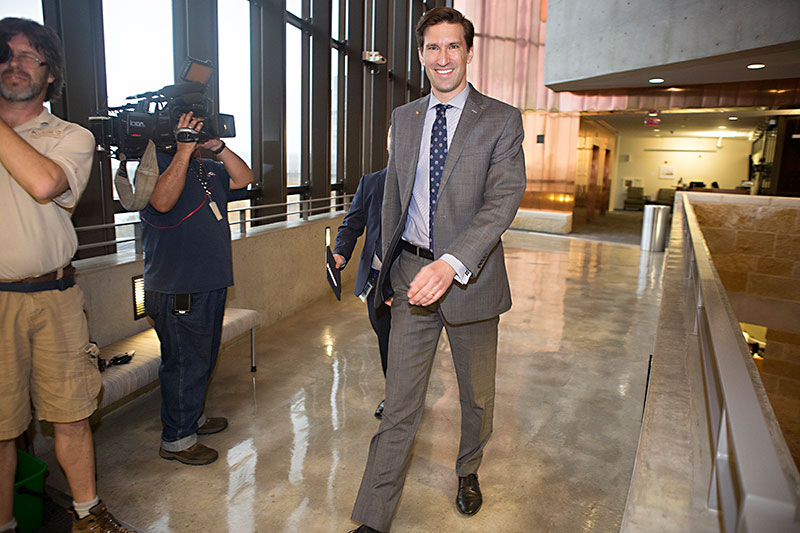 No regular City Council meeting this week (the next is March 1), but Council resumed budget work sessions on Wed., Feb. 21, with the initial official presentation by new City Manager Spencer Cronk, who was introduced to Austin's public style at the post-midnight Feb. 15 meeting. "New City Man­ag­er Spencer Cronk: “Engagement and Transparency," Feb. 23.

Early voting for the March 6 primaries kicked off Tue., Feb. 20, and runs through Fri., March 2. You can vote at any number of Travis County voting sites (including some mobiles), and there is similar information for Hays, Williamson, et al. See the Chronicle endorsements and voting information.

Travis County Commissioners voted on Tuesday to solicit proposals from private businesses for not only the construction of a new courthouse to replace the one at 1000 Guadalupe, but also the land where a new courthouse would be built. Typically the county secures a site before soliciting a developer to handle building.

Pio Renteria filed an application on Tuesday that would rename Manchaca Road (with an a) to Menchaca Road (with an e). The argument is that the road is already named after Texas Revolutionary soldier José Antonio Menchaca and should be listed appropriately on the street. No telling what this would do to the tiny unincorporated community of Manchaca just to our south.

Monday Night Shooting: Three locations, an attempted kidnapping, and an executed carjacking of a Yellow Cab all factored into an incident in Southeast Austin Monday night that left one man dead and seven officers on leave for firing their weapons. See the Daily News online for more.

Nearly 500 students from Austin-area schools walked out of class Wednesday to support the Parkland, Florida, students demanding stricter gun laws. That included 100 students from Clint Small Middle School. Meanwhile, at UT, students learned Wednesday that two guns had been found unattended – one in the McCombs Building and another on the Pickle Campus.

Austin leads Texas in the rate of its diversion of waste through recycling, at 42%, above the state average of 22% and the national average of 34%. That's according to a new report by TexPIRG: "Trash in America: Moving From Destructive Consumption to a Zero-Waste System." The full report is available at www.texpirg.org.

Chris Milam, developer of the embattled Backyard project in Bee Cave, was arrested Tuesday for indecency with a child, multiple outlets report. Milam, who is accused of exposing himself to a young girl on two occasions, denies the charge.