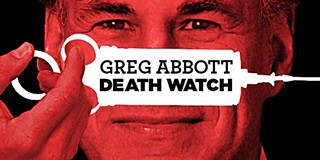 The state's Board of Pardons and Paroles voted unnamiously on Tuesday to recommend a commutation of sentence from death to life in prison for Thomas Whitaker, who was scheduled for execution this evening, Feb. 22, for conspiring to kill his brother and parents in December of 2003. (His brother and mother were killed by a hired gunman. His father survived a gunshot wound to the chest.) It was the first time since 2007 that the board recommended clemency for a death row inmate.

The recommendation comes on the heels of a Request for Commutation filed by Austin attorney Keith Hampton last month on behalf of Kent Whitaker, Thomas' father, who since the murders has urged the state to spare his son from execution, and pleaded that ending his life would bring no form of closure, healing, or justice (see "Quote of the Week," Feb. 23).

Death Watch: Justice for Whom?
Kent Whitaker never wanted execution for his son