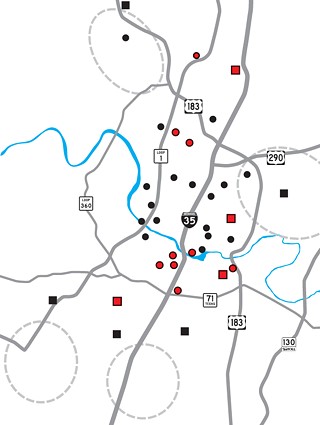 City of AustinPool System: Black and red squares=Community Pools Black and red dots=Neighborhood Pools The Aquatic Master Plan recommends “end of life replacement” for all of the pools shown in red, using bond money that would be approved by voters. Dotted circles represent regions where the AMP recommends building a new pool.

More than six years after City Council passed a resolution initiating the public process that resulted in the Aquatic Master Plan, members voted last week to take the first step toward reviving a pool system that's been neglected for so long that a mechanic recently characterized the whole lot as "on life support." The initial report dropped last November, but Council, nervous about some of its components, asked a task force of Parks and Recreation Board members to comb more than 600 pages, take more public input, and return with recommendations. Despite lingering concerns – namely over fee increases, pool closures, and a $124.3 million bond proposal to cover capital costs – the motion to approve passed 10-1, with only Jimmy Flannigan opposed.

The system boasts 51 facilities, including seven municipal pools, 28 neighborhood pools, three wading pools, and 11 splash pads. Many are plagued by cracks from shifting soil, rusting pipes, and busted decks. Some pump systems are so antiquated that it's hard to retain technicians; many were built in the 1920s and 1930s and are, as the original consultant's report found, "functionally obsolete." They were only built to last 25 to 30 years.

Forget about modern amenities like wi-fi and pool slides; too many of our facilities aren't even in compliance with Americans With Disabilities Act standards. And worse, as task force member Rick Cofer noted, the city expects 13 pools to fail within the next five years – at a cost of anywhere from $3 million to $10 million a pool. That's why the AMP suggests end-of-life replacements for 13 pools including Big and Little Stacy, Garrison, and Givens, sooner than later, for $73.7 million. Going further, the task force recommends adding five new facilities totaling $50.6 million: four new pools to fulfill the city's equity burden, and a central aquatic maintenance facility. That's where the $124 million bond comes in. The task force recommends putting it on the November 2018 ballot.

One of the criticisms of the initial consultants' report was that it amounted to a "pool closing plan." While it's true some pools considered for "end of life" treatment are popular, the report argues it's smarter to make tough decisions sooner than later: "We do not consider it appropriate to maintain the status quo – taking pools out of service year after year until the city pool system has fewer, not more, facilities for an ever-growing population." Aside from the 13 replacements, the task force foresees a "long-term reduction in the number of Neigh­borhood Pools by ten pools," but recommends that any future pool closures go before the full Council. While that sounds like a headache what with Council's already extensive meeting schedule, Mayor Pro Tem Kathie Tovo secured an amendment to that effect.

A chorus of stakeholders spoke in favor of the plan, including several members of Love Austin Pools, a grassroots group born to pressure the city into action. Laura Cottam Sajbel acknowledged the price tag, but said it was a direct reflection of how the city has neglected maintenance responsibilities over the years. "It's the heart of Austin," she said. "It's time to take care of the residents who built the city into such a crown jewel." Susana Almanza commended the equity component, which would place new pools in the southwest and southeast.

The motion to approve recommendations went through after some debate. Staff assured Council that public engagement indicates poolgoers are willing to pay higher fees in exchange for more services. (Either way, Council would get the final say in any theoretical rate increases.) Greg Casar ultimately supported the measure, but said he would find it hard to support a full $124 million ask for a bond, when the city hasn't asked for that much for affordable housing. Flannigan voted no after denouncing the request for new facilities. "I will be in the stark minority on this," he said, "but I cannot vote for a plan that recommends spending 40 percent of new money on new facilities. We have an aquatics system we can't afford to maintain."

Indeed, it will take a herculean effort to shepherd such a large ask through Council when the time comes to put together the November ballot, as Flannigan's fiscal concerns will be shared by other budget-conscious citizens. Speaking this week, task force member Rich DePalma said the 40% Flannigan refers to is part of the equity aspect Council asked the task force to address. The expansion includes East Aus­tin's Colony Park, plus pools in the northwest, southwest, and southeast regions, which have been neglected as the city has grown. "We have a lot of folks that will travel MoPac or they'll travel I-35 in order to go miles and miles and miles to another pool," DePalma said. "Speaking of West Aus­tin, the closest pool to Dick Nichols Park is Gar­ri­son, and that's 4.9 miles away. Yet in other areas there's multiple pools less than a mile away, or definitely multiple pools 5 miles away. So it's really creating that equity lens."

DePalma said it would be tough to get a bond passed without addressing the needs of parts of town like Southwest Austin. But he expressed optimism that voters would weigh in positively on a bond, if they are properly educated about the realities. He said he learned as much working on the recent $1 billion AISD bond voters approved in November. "When the voter has the choice to repair and fix and add additional value, they'll take it – as long as there's logic ... as long as it makes sense." 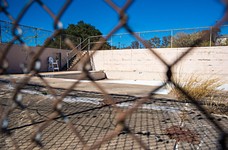