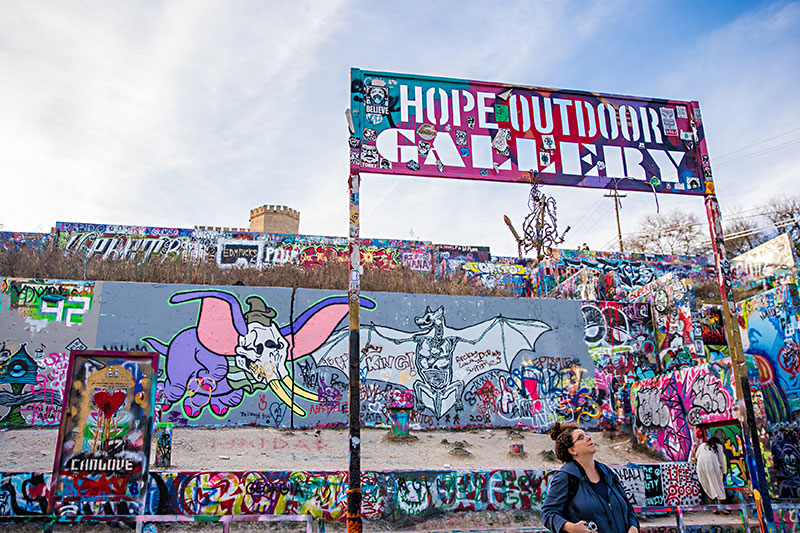 The Historic Landmark Commission voted unanimously on Monday to approve the demolition of the HOPE Outdoor Gallery on Baylor and Lamar. The gallery – known unofficially as Graffiti Park – had been looking for a more permanent location since 2013, and last November announced plans to move to East Austin, near Carson Creek Ranch. Organizers expect that location to open for public use later this year. Property owners of the Downtown site have yet to announce any future plans. (Photo by David Brendan Hall)

Formal City Council meetings resume in earnest today, Thursday, Feb. 1, featuring a 126-Item agenda that includes official appointment of a new city manager (Spencer Cronk at $325,000+ a year), more arguments over the Champion tracts, and the return of the Aquatic Master Plan. See "Council: Back to the Dais," Feb. 2.

The Third Service: Negotiations have already started anew between the city and Austin-Travis County EMS Employee Association. A first round of talks stalled in November after the two sides couldn't agree on a compensation package.

Cap Metro announced Monday that Randy Clarke will take over as CEO and president on March 7.

Cecile Richards, reproductive rights icon and president of Planned Parenthood, stepped down after 12 years with the national organization. Don't expect her to go quietly: She'll be promoting a new book beginning in April and will help campaign for Democrats during midterm elections. If she could have made that Texas gubernatorial filing deadline ....

The Travis County death toll from the flu continues to rise. Within two weeks the number of residents who have died due to the illness jumped from 11 to 23. Influenza season can last until as late as May, according to the CDC.

Paxton the Pox: Attorney General Ken Pax­ton has threatened to sue if the U.S. Supreme Court fails to scrap a lower court ruling that temporarily allowed DACA to stand in part, after Trump previously rescinded the program. In an amicus brief filed with SCOTUS, Paxton and 12 other states warn they'll pursue litigation if the injunction is maintained through June.

A Texas Observer report found that Immigrations and Customs Enforcement had arrested nearly three times as many immigrants as it had initially reported in last February's Central Texas raids. See "ICE Misled Public ..." at austinchronicle.com/daily/news for details.