Canvassing the City for ECHO’s Point in Time Count

Nina Hernandez takes to the 4am streets for annual survey 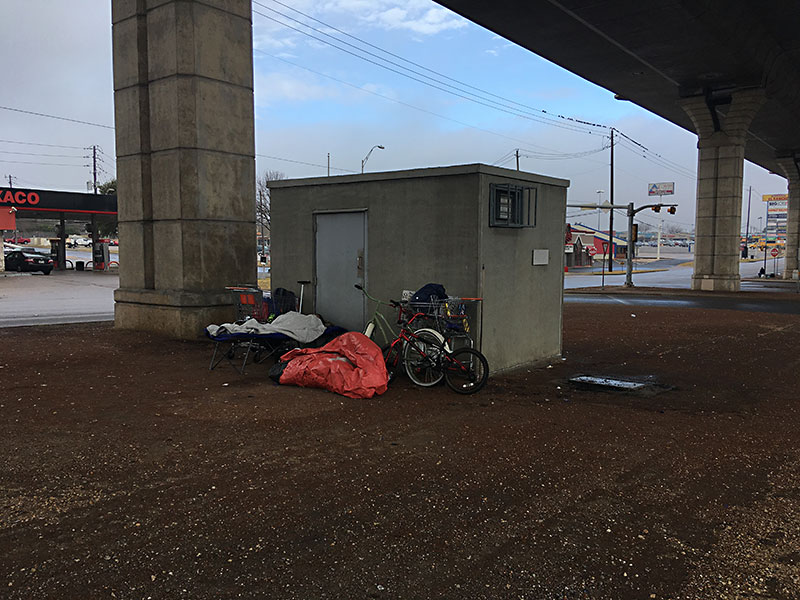 Every year since 2010, the Ending Com­mun­ity Homelessness Coalition hosts an army of volunteers for its Point in Time Count of the people experiencing homelessness in Austin and Travis County. It's something of a logistical wonder, so this year, I joined the 600 volunteers tasked with scouring miles of city terrain to find and survey those people, to collect data that will secure federal funding for local service providers and allow them to target where it's most needed. While organizers admit the PIT count doesn't provide a precise number of those in need of housing, it's a proven method of hearing from real people dealing with barriers to housing about what they might need to get back on their feet.

Cities throughout the country conduct similar counts. Besides the snapshot they offer into the city's homelessness situation, the counts are a requirement of the U.S. Department of Housing and Urban Development's Continuum of Care program, which helps local nonprofits like ECHO and municipalities rehouse people. Austin has had a PIT count every year since 2010. In this city of nearly 1 million people, there are about 2,000 who live without a home. Of those, a little more than half can find spaces in city shelters, which operate under a lottery system due to demand, or in transitional housing.

Last year, ECHO found a 28% reduction in the number of people reporting as chronically homeless.

ECHO works with local shelters and other programs to count the people in shelter beds or other transitional housing. While those folks sleep in the shelter on PIT Count nights, volunteers venture out and search for the remaining people. On the ground, as you cover block after block, it becomes clear what a massive undertaking it is and why the project requires hundreds of helpers. Filling out a full survey can take several minutes per person, even if that person doesn't want to disclose personal details. The questions about their experience can dredge up painful memories that can make people need a pause.

Volunteers take an hourlong training course before the count, either in person or online, and are assigned a team lead in the run-up. They follow a few simple rules: Announce yourself with a pleasant "good morning"; shine your flashlight at yourself, not at the person whose slumber you've interrupted; be cautious with dogs, and follow the owner's lead; never touch a sleeping person, or knock on their RV door, car window, or tent flap; and if a person declines to be surveyed, politely move on. Make this early morning wake-up call as seamless and uninvasive a process as possible.

Strapped with flashlights, clipboards, and stacks of surveys, groups descended on the Downtown area beginning at 3am. Our group was assigned to Section 4, and walked two chunks of the city east of I-35, including the St. Johns and Windsor Park neighborhoods. If they were agreeable – and often they were – we asked for basic demographic information (age, race, gender, etc.); whether they have a substance abuse problem, disability, mental health issue, illness, or had experienced wage theft; and whether any of those factors have kept them from finding and keeping housing.

Jessica Cochran, a grant writer and first-time volunteer, said she was "really struck by how much these people really want to tell their stories. ... They are experiencing homelessness for a reason, and having a unique experience while they're doing that," she added. "And they want ears to hear about that and hear about what they're going through."

At one point our map took us into the dewy baseball fields at Bartholomew Dis­trict Park. Though our map noted it as a place to thoroughly scope out, it became more clear the farther we walked along the damp pathways that most people had found drier accommodations for the night. It's a challenge ECHO and its volunteers tackle each year. Though team leads scout in advance, weather and other conditions can change things quickly.

It's also clear, from both the ground level and ECHO's accumulated data, how much more work is to be done. Since Austin started its count eight years ago, the number of surveyed individuals has remained relatively steady. In 2017, the group counted 2,036 people living both outside and in shelters or transitional housing. Though that number dipped as low as 1,832 in 2015, it's ultimately not far off from the 2,087 people counted in 2010. The numbers are similar for those living "unsheltered," sleeping behind gas stations, on sidewalks, in tents, or in their vehicles. The 2017 count found 832 living in Austin without a shelter, a slight bump from the year before. It speaks to one man's ire in sending us away from his spot under a highway overpass, asking – in so many words – what impact the study has in practical terms. 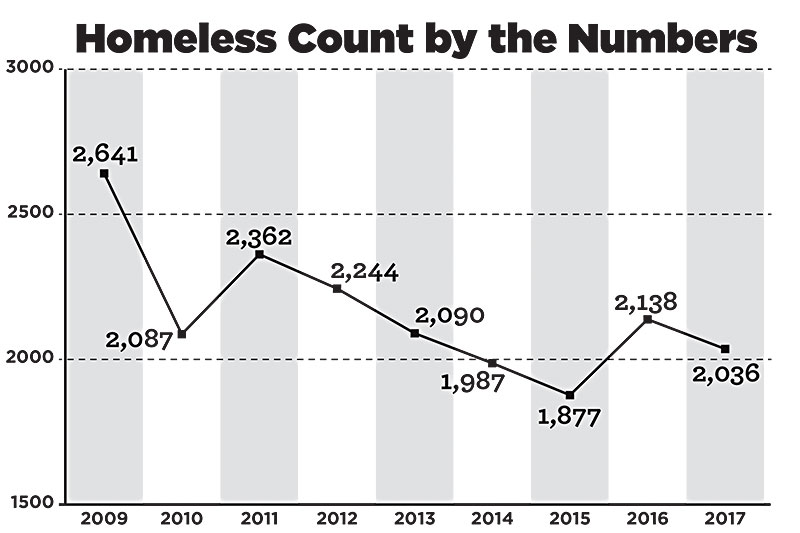 According to ECHO data, Austin’s homeless count has hovered around 2,000 people since 2010.

But there are results. Last year, ECHO found a 28% reduction in the number of people reporting as chronically homeless. That number can be attributed to the community making it a priority to help secure housing for people on the streets who are living with disabilities. The community can't make those people a priority if it doesn't know that they're there, or what they need. If respondents want, they update their information in ECHO's database, which is a step toward accessing the services they need – whatever they may be. Beyond that, we'll have to wait and see what this year's figures tell us.

ECHO expects to publish preliminary numbers for 2018 by March, with final figures in April.

People Experiencing Homelessness Are More Visible Than Ever. That Doesn’t Mean They’re Being Counted.
What it was like on the ground for this year’s Point in Time Count