One evening last September, an employee at the local organization Grassroots Lead­er­ship was scanning through Travis Coun­ty's proposed budget when she stumbled upon plans for a new $91 million women's jail on the county's Del Valle correctional campus. She spread the word to her co-workers, who were blindsided by the news. "It immediately caught our eye and caused a lot of concern," said Holly Kirby, criminal justice programs director for Grassroots.

Kirby notified several partner organizations of Grassroots' Decarcerate ATX campaign, which aims to reduce incarceration and its inordinate impact on communities of color. These included Lone Star Justice Alliance, Texas Advocates for Justice, Texas Appleseed, Texas Criminal Justice Coalition, and Texas Fair Defense Project – "all the folks in the community that should be a part of the conversation," Kirby said. "And it was a total surprise to all of us."

Further alarming the coalition, the new women's facility is just part of the first phase of an extensive jail renovation and expansion expected to take 24 years and cost more than half a billion dollars. After testifying against the jail at the county commissioners' budget hearing in September, the coalition sent a letter to county staff and elected officials on Jan. 19, asking them to halt any further action on the jail. "Our organizations strongly believe that before we invest millions in new infrastructure that potentially adds bed capacity to the Travis County jail system, serious analysis of the drivers of the jail population and formal consultation with stakeholders are urgently needed."

The facility is part of an extensive jail renovation and expansion expected to take 24 years and cost more than half a billion dollars.

But the county appears to have no intentions of stopping its plans, though it has indicated a willingness to hear the coalition's concerns. "We will take [the letter] into consideration as we continue to work on this project," said Hector Nieto, a public information officer for Travis County.

Travis County's jail revamping process began in 2012, when it decided to commission a study of its Downtown booking facility, Downtown jail, and 130-acre campus in Del Valle. This was led by hired consultants and included participation by several county and city agencies and departments; it did not seek input from community organizations. The consultants' resulting master plan recommends spending $616 million for repairs and upgrades, reorganizing the buildings' layout and connectivity, and constructing four new buildings to replace older ones and accommodate more inmates with mental health and medical conditions. County commissioners unanimously adopted the master plan in January of 2016 and a budget in Sep­tember of 2017 which included $6.6 million for the design and preconstruction of the new building, which is projected to have a final price tag of $270,000 per bed.

The coalition's letter calls for a discussion with all stakeholders, as well as specific policy changes, such as decriminalizing all offenses eligible for cite-and-release, diverting individuals charged with felony controlled substance possession away from pre-trial incarceration so they can access treatment, and investing in alternatives to arresting people with mental health disorders. Travis County previously invited community organizations to participate in forums on the jail population and female facility; Nieto said county staff would consider all concerns and "absorb and relay" information as needed. "Master plans are merely the first step in developing individual projects to fund," he said, "which is the point at which more in-depth stakeholder conversations may take place."

County Judge Sarah Eckhardt tried to shed some light on the undertaking during a Jan. 9 commissioners court hearing. "This is a larger effort of the Sheriff's Depart­ment to offline some older buildings and bring on new – not additional bed space – but better bed space to replace some frankly crap buildings," she said. But the master plan calls for facilities to house about 2,834 inmates, "with room on-site to absorb future growth." While TCSO told me that its current correctional system capacity is about 3,100, the consultants' planning documents provide inconsistent current capacity numbers, some as low as 2,820. This has created confusion over whether the new project would expand capacity or not. The jail population, meanwhile, was 2,425 as of Jan. 15 (with a 2017 average of 2,519). The women's facility currently has 358 beds, plus 48 more that are unused. The master plan calls for a new building with 336 beds. Grassroots, however, points to the county's 2018 budget summary that says the female population "has been growing and the current facility is insufficient to accommodate this growth." Meanwhile, some organizations say the goal should be a significant decrease. "There are women in jail who do not belong in jail and who are not public safety threats, and the time that they are spending in jail is very damaging, not only to them but to their children and families," said Mary Schmid Mergler, director of Texas Appleseed's criminal justice project. "If a new facility is designed and built with the same bed capacity that they have now, those beds will be filled and the county will be much less motivated to find ways to divert women from the jail entirely."

The women's building, built in 1989 and expanded in 2001, is one of the oldest at the Del Valle campus. It's in compliance with state jail standards, and appears aging yet well maintained. But TCSO says it needs a new, larger building because the existing structure is costly to repair, doesn't provide personalized direct supervision of inmates, and lacks enough beds under one roof (leading some women to be housed in an adjacent building), as well as space for inmates with mental health problems.

Funding for the new building is set to come from certificates of obligation, which will be paid by property taxes and can be controversial because they enable quick action on projects and don't require voter approval. The last bond election for a jail facility – built less than a decade ago – approved funding for one-third of a massive $71 million jail building. All new jail construction costs are in addition to what Travis County taxpayers pay for day-to-day incarceration, estimated in 2015 to be about $100,000 per day.

A version of this article appeared in print on January 26, 2018 with the headline: Del Valle’s New Digs 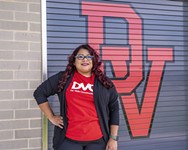