T. Don Hutto detainees can't get their day in court 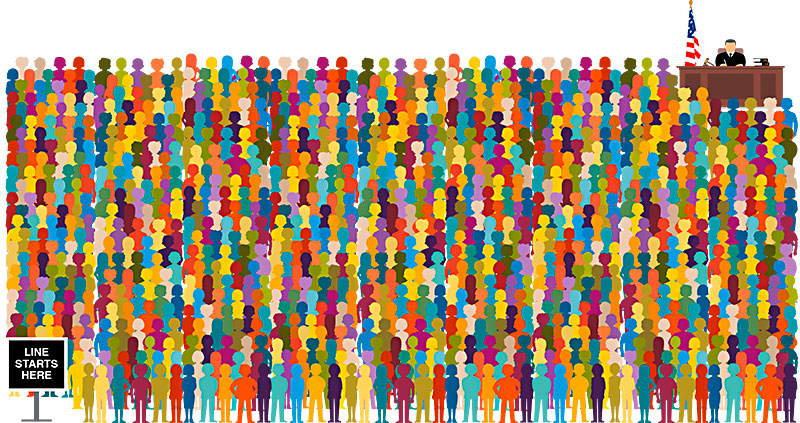 Celia spent two terms in her home country's jails for expressing oppositional views about its government. She feared for her safety, and eventually escaped for a freer life in the U.S. She was kidnapped by traffickers in Mexico, raped, and held for ransom. Celia fled, and got to Texas. In June, she was picked up by ICE agents and forced into the T. Don Hutto detention center.

Celia, who's asked to go by a pseudonym, has spent the past seven months waiting to appear before an immigration judge to plead her case for asylum. She still has no hearing date, an unprecedented obstacle. When her attorney, Virginia Raymond, calls the case status hotline at the Executive Office for Immigration Review, she gets the same recording she's heard since October: "The system does not show any information regarding a future hearing date on your case."

More than 98,000 cases are pending throughout Texas.

Raymond describes Celia's demeanor during visits to the 500-bed all-women detention center as "utter despair." She looks at the ground and sobs. "She feels desperate and hopeless," said Raymond, who works with the Austin Region of Justice for Our Neighbors. "I'm not a psychologist, but I know she is really suffering."

Celia is joined by dozens of other women facing record-breaking wait times for a hearing. In the San Antonio court where Hutto's detained women see a judge, 26,460 cases are currently pending, a new high, according to Syracuse University's Trans­ac­tion­al Records Access Clearing­house. The court suffers from the longest lag to see an immigration judge in the whole state, with an average wait time of 31 months. Nearly 1,000 hearings haven't made it onto the schedule. More than 98,000 cases are pending in Texas – second-worst behind Cali­for­nia – with a statewide average wait of 28 months. The country as a whole hit a record high this month in both pending cases and wait times; 623,000 cases await. That's three times higher than when Barack Obama became president in 2009.

"This isn't your usual bureaucratic backlog," says Sofia Casini, an immigration coordinator with Grassroots Leadership. "There aren't too many cases on the docket; there's hundreds of cases not on the docket. That's not normal in any legal context."

Without a court date, women can't know when to hire an attorney; when to collect evidence, like police records from their home country (an often dangerous task); and other time-consuming and costly preparations. And as weeks turn into months, evidence can grow stale and witnesses can back out. "They are getting no information at all about essentially their life sentence," said Casini. "It's hard to explain just how completely unjust and abnormal that is."

Edna Yang, assistant executive director and attorney with American Gateways, said her group represents a handful of women who've been on hold since October. They noticed a spike in holdups last fall. "There have always been some delays, but we've never seen waits like this before. It feels like nothing is moving through. It's a really terrible situation." On a recent visit to Hut­to, Yang observed a sense of hopelessness among the women, with some considering a return into hiding in their home countries. She says prolonged jail time and anxiety of the unknown re-traumatizes the noncriminal asylum-seekers, who escaped their homes due to mostly gender-based violence including domestic abuse and gang-led assault. American Gateways issued a complaint to the assistant chief immi­gra­tion judge regarding the case hearing stoppage but have yet to receive a response.

Attorneys and immigration experts attribute the problem in part to a disorganized and overburdened system. The nation's 58 immigration courts (Texas has nine) work differently than standard federal courts, and operate under the executive branch's Department of Justice (and virulently anti-immigrant Attorney General Jeff Sessions). They don't provide for things like court reporters, and have few clerks. The 334 immigration judges handle around 1,500 cases each year, roughly three times that of a federal judge.

“The wait for a hearing is particularly extraord­in­ary. Any sense of justice is elusive.” – Elissa Steglich

Elissa Steglich says the system has been "broken and under-resourced" for years, pointing to a lack of federal funding and understaffing of courtrooms. Steglich is co-director of the UT Law School's Immigra­tion Clinic, and her students work Hutto asylum cases pro bono. They echo the concern over nonscheduled hearings. "The wait for a hearing is particularly extraordinary," said Steglich. "Any sense of justice is elusive."

In an effort to alleviate some of that backlog last year, judges in Miami and the northeast started hearing Hutto's cases via video conference. But Steglich said the switch caused logistical problems. Moving back to San Antonio only caused more chaos. (Court records aren't digitized, so paperwork would get lost.) Steglich said the San Anton­io court was ill-prepared for the shift back. "Some of the clients in the middle of their case that the Miami courts were handling just got dropped. It's like when a flight gets delayed and the airline has an incentive to keep all the other flights on track, so you get sidelined on the tarmac forever."

The DOJ acknowledges the problem. Spokes­person Devin O'Malley said the immigration court system "for years" has "failed to address systemic issues that add unnecessary time to a respondent's case and put undue stress on the pending case­load." He said the EOIR "already has numerous case completion goals imposed by statute or congressional recommendation, and is developing additional benchmarks for immigration courts to assist in properly managing cases, increase productivity, and reduce the pending caseload." Pressed for comment on the wait times, an EOIR spokesperson said they "do not comment on third-party reporting of EOIR data."

Steglich says the prolonged detentions should trouble every taxpayer. Each detention bed costs $159 per day, according to the National Immigration Forum, and a portion of that money flows to private corporations such as CoreCivic, which runs Hutto, and has a history of alleged abuse and civil rights violations. (See "More Trouble at T. Don Hutto," Nov. 17, 2017, for more on those allegations of abuse. Last Monday we learned that Laura Monterrosa, the subject of that story, attempted suicide after learning she would be punished for choosing not to eat in the cafeteria where her abuser is now assigned.) Private prison companies stand to gain when immigrants are detained for extended periods of time. CoreCivic is the second-largest private prison system in the country, and in 2016 raked in more than $1 billion in revenue. In an optimistic earnings call last fall, CoreCivic's CEO said ICE expects the average length of detentions to jump as a result of increased interior enforcement, an outcome that benefits their profit margin.

Meanwhile, the Trump administration has requested an additional 10,000 ICE agents and 48,000 more detention beds. While the EOIR recently announced aims to cut the pending caseload in half by 2020, and promised to add more immigration judges to the system over two years, attorneys caution that process will not only be slow, but also won't fully fix the problem. Those representing Hutto women agree the ideal reform would be to end the detentions altogether. "The system is unnecessary and unjust in the first place," said Casini. "All these women locked up in Hutto don't need to be there. There are friends, family, and community groups like Casa Marianella here in Austin that can take them in. Instead, they are trapped in a cell, and left in the dark."

A version of this article appeared in print on January 26, 2018 with the headline: Stuck in Detention